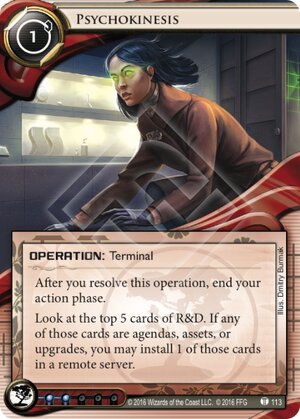 Illustrated by Dmitry Burmak
Decklists with this card

Sometimes a card is defined more by what it doesn't say than what it says. Psychokinesis doesn't say "shuffle R&D" or "trash other cards". It lets you peek at the top of R&D and install a card if you like.

One might wonder why a card that lets you see into the future isn't called Precognition. Well, there's a good reason for that. Precognition is quite similar though so later in this review I'll compare the two.

How much is information worth? How much do you gain by knowing what you're doing to draw next and what the runner would access if he or she accesses cards of the top of R&D? When it comes to information about the game state the value really depends on your ability to capitalize on it. It also depends on the specific context of the game you're playing.

It can create ambiguity as well as remove it, depending on which terms can be appositives to other terms. Classic example: If you face a runner with a strong R&D game knowing that R&D won't turn up important cards (agenda's, easily trashed but vital assets) or conversely will turn up such cards helps you decide whether to put extra ICE in front of R&D or focus your attention elsewhere. If you face an R&D full of agenda's popping that Jackson Howard now may be a good idea, if it will soon turn up just the card you need you'll want to be careful about Mr Howard though.

At a slightly longer term knowing the top 5 cards of R&D lets you plan across turns. This is a subtle benefit, it won't win you games directly but it will let you think in terms of plans that are likely to work rather than just hoping for the right card to turn up. Granted, if you see the wrong cards coming up and have no way to counter that it still sucks, but at least you'll know that spending some clicks drawing would be a good idea.

And don't forget that the cards you see will not be part of the cards you don't see. Assuming a 45 card deck you'll have at the start of the game 40 cards in R&D (5 drawn as starting hand). Assuming you draw 15 cards in the course of the game knowing that a card is not part of the next five tells you that the chance you will eventually draw it is significantly smaller than you originally would have guessed.

Now to the second effect: install an agenda, asset or upgrade in a remote server. First thing to note: it's not a new remote server like Mushin No Shin, you are allowed to install in an existing server, for example one with psychic police protection or layers of nasty ICE.

Installing an agenda at the end of your turn is potentially useful but risky. It can act like a big neon sign: agenda in this server. Of course you aren't obligated to actually install an agenda and if the runner reads to much into your actions that's a weakness to be exploited.

Other, and possibly more common, options for installing are things like PAD Campaign. There's little risk in installing a PAD Campaign at the end of your turn as you'll typically rez it at the end of the runner's turn so it needs to be installed at the start of their turn anyway. Defensive assets like Bio-Ethics Association or Hostile Infrastructure make for good last click installs too.

Just bear in mind that you can't install in a central, so no Caprice on R&D with this card. That's not a too severe limitation though.

Now to the comparison with the obvious sister card: Precognition. Precognition is 1 cheaper but costs 1 more influence. It's also not a terminal, which is good as that would impact Precognition much more than Psychokinesis.

Precognition lets you reorder but not install cards. As such it's better for Mutate and other tricks which require R&D in a particular order. But as you can read in the review below Precognition it has an issue with justifying it's worth in a deck. Basically Precognition has an opportunity cost, it costs a click and isn't likely to anything immediately useful.

Psychokinesis, through it's install ability, works differently. It has a higher credit cost (1) but a smaller tempo cost if you can use the install ability. If you install a card that means one click you won't need to spend installing that card and you'll probably gain the benefits of the card sooner (by being able to rez it more quickly). If you install a card that you need so badly that you would otherwise click to draw for it you effectively gain even more clicks. The card that you install is also no longer in R&D which means you'll reach cards below it slightly faster.

If Psychokinesis is likely to lead to an install it has at worst a very small tempo hit and at best a moderate tempo gain. Is that worth including it? Probably not. If you can additionally make good use out of the information it gives you it is a potent tool though.