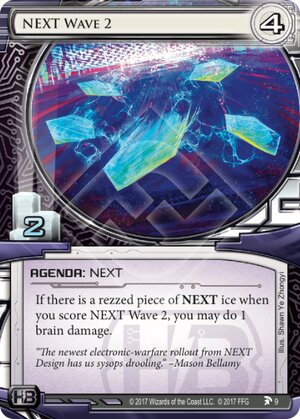 When you score this agenda, if there is a rezzed piece of NEXT ice, you may do 1 core damage.

"The newest electronic-warfare rollout from NEXT Design has us sysops drooling." -Mason Bellamy
Illustrated by Shawn Ye Zhongyi
Decklists with this card

4/2 agendas have never been great. Sometimes they've been okay. But they're competing for deck slots with 3/2s, and while many 3/2s have rotated out (ding dong the witch is dead) the Projects are still kicking. A 4/2 agenda, therefore, needs to offer some compensation if it's stolen (like Explode-a-palooza) or some benefit if you score it (like Corporate Sales Team).

NEXT Wave 2 gives you...a brain damage. One. If you have NEXT Ice rezzed. That part's easy, honestly.

Or, it would be, if NEXT Bronze hadn't rotated out. Seriously, the whole point of NEXT ice is to be cheap, abundant, and self-reinforcing, so losing the only 2-cost ice in the suite is a bit of a punch in the genitals.

So instead of having easy fodder, you're now trying to work with NEXT Silver, which is alright, NEXT Opal, which is pretty much just bad, and NEXT Gold, which super expensive.

The core problem here is that doing 1 point of brain damage, by itself, isn't going to win you the game. It makes any future flatline easier, but only NEXT Gold has that potential in the required ice mix you have to run for this card. You could pair it with other brain damaging (or pseudo-brain damage like Self-Destruct Chips) to choke the runner's hand down. But generally, brain damage isn't a win condition.

So, to make this card work, you have to run an ice suite that isn't very good, score an agenda that could've been a Project Vitruvius, in pursuit of a win condition that doesn't really exist.

All I have to say, is that the next NEXT ice had better be good if this is going to see play post-rotation.

(Revised Core Set era)
tiedyedvortex 4728
If you IAA this, you can play Defective Brainchips before you score it and get TWO brain damage. C-C-C-COMBOO!!! — PureFlight 21 Dec 2017
The upcoming NEXT Sapphire is like a non-deflecting Miraju with some archives recursion tossed in, so NEXT's future isn't looking too bad. — cinnadream 21 Dec 2017