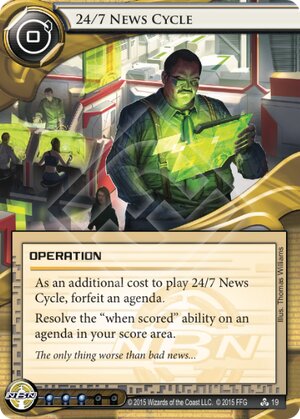 As an additional cost to play 24/7 News Cycle, forfeit an agenda.

Resolve the "when scored" ability on an agenda in your score area.

The only thing worse than bad news...
Illustrated by Thomas Williams
Decklists with this card

Current gameplay focuses on its role in kill combos, but 24/7 News Cycle has the potential to be a Swiss army knife type of card, like a Same Old Thing for agendas. With the right agenda mix, it becomes a multi-function tool in the mid-to-late-game that can break a siphon lock, tutor a crucial card, amputate the opponent's board position, or set up a fast-advance play.

If you have room to slot them, Domestic Sleepers, Project Kusanagi, and Clones are Not People make it cheaper to play. It obviously finds a better home in decks that slot numerous 1-point agendas, such as some current Jinteki PE, Argus Security, and NBN CMT styles.

Resolve Breaking News to give the runner 2 tags

Resolve Posted Bounty to forfeit it, give the runner 1 tag and take 1 bad publicity

Resolve Vulcan Coverup for 2 meat damage; combine with other damage to taste/as needed

Resolve Chronos Project to remove the runner's heap from the game

Resolve Character Assassination to trash a resource (cannot be prevented)

Resolve License Acquisition to install Corporate Town or Ibrahim Salem (or perhaps an urgently needed Jackson Howard) from archives and rez without cost.

Resolve Corporate Sales Team to place 10 more credits on it

Resolve Superior Cyberwalls to gain 1 credit for each rezzed barrier

Resolve Priority Requisition to rez Archer or Enforcer without cost

(Blood Money era)
jiriku 35
A good review. It's nice to have it all put together in one place. Makes thinking up all the janky combos easier. Bonus points for Turkey Prize. <3 — H0tl1ne 6 Sep 2016
Style points to anyone who can force the runner to earn 24 credits in a single game with continuous 24/7 coverage of the maggots in the food supply. — jiriku 7 Sep 2016
I have a question: Does 24/7 also resolve "on score" effects that are not printed on the agena card? Like Leela or Titan? I really like the jank potential of resolving Firmware Updates to gain 12 creds from Mark Yale :D What an economy card :D — Krams 7 Sep 2016
I suppose not. You only resolve one ability, not score an agenda. — H0tl1ne 7 Sep 2016
i like this — Apex Predator 30 Jun 2018
5

This amazing card helps NBN kill decks work around Film Critic. More generally, it facilitates runner kills without the need for the runner to trigger anything. Even the most cautious of runners could be killed!

Score out Breaking News plus another agenda. Next turn, activate 24/7 News Cycle to give the runner two tags, before double Scorched Earthing (or Traffic Accident Scorched Earthing) them. Ta-da!

This is the immediately obvious use of the card, and indeed it is being used in this way in a new breed of Haarpsichord Studios: Entertainment Unleashed decks.

It remains to be seen whether further uses for the card will arise over time...

(Data and Destiny era)
Hayati 50
That almost unstoppable combo makes me so salty. — Steamwood 20 Jan 2016
I'd also like to point out what it does in Jinteki with Philotic Entanglement... — H0tl1ne 29 Feb 2016
You could arguably do the same thing in Weyland with Posted Bounty, right? You'd need two scored agendas, play 24/7 by forfeiting the other one, and then trigger Bounty, forfeiting it and tagging the runner. — PureFlight 13 Mar 2016
Works nice with Philotic, but you can't count on that because there is only one in the deck and you can't score it from hand. This and Breaking News is just stupid. I don't like this card. Breaking News is on MWL now (and rightfully so). But if you are building a deck around this concept, the 3 influence is super easy to pay. — quailman2101 25 Jul 2016