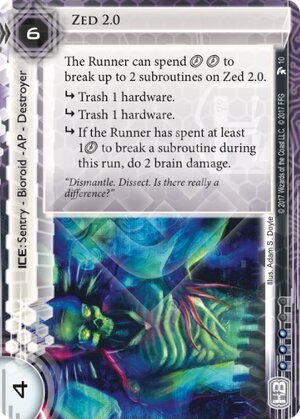 subroutine If the Runner has lost click to break a subroutine during this run, do 2 core damage.

"Dismantle. Dissect. Is there really a difference?"
Illustrated by Adam S. Doyle
Decklists with this card

But what I want to point out is a remark about design : Zed 2.0 is the first destroyer that doesn't trash programs and the first Ice that trashes hardwares and have the destroyer subtype (let alone Enforcer 1.0 which trashes programs and consoles). It's interesting to see if that stretch of the destroyer role will be kept or if it's just a one-hit weirdness — that makes more sense than the observer subtype given to Bloom, though (unofficially spoiled at the time of this writing, it's an alike of Crick and Architect).

I hope it'll see play, I want to burn my Sharpshooters one last time before they leave. And feel we'll miss them if a significant hardware trashing ice is ever released.

(Daedalus Complex era)
Lupus Yonderboi 246
I will miss Sharpie, too. But I think a significant hardware trashing ice just has been released and it's called Zed 2.0. The rez-to-break-cost-ratio is okay for a sentry with significant boom (and the corp trashing your 5c console is significant!). If hit without breaker and only 3 leftover clicks (so you can't use the click breaking twice) it will always at least trash 1 hardware or fry your brain with 2 dmg. This bioroid is great because the 3rd sub completely negates the bioroid weakness. You want to break the 2 hardware trash subs with clicks? Eat 2 brain damage! You want to keep the 3rd sub harmless? Break the frist 2 with regular breakers! — Krams 27 Feb 2017
4

Homedude will eat your brains

Like Fairchild 3.0, this is a beefy mid-size piece of ice with a nasty facecheck. It most closely parallels Ichi 1.0 and should be compared to that when you're considering this for your deck:

EDIT: The MKU math was wrong because the last sub is blank if they can break. The correct math is 6 or 3 and a datasucker token, assuming they haven't clicked through another ice before this one. Still respectable, but not quite as strong.

The power of the facecheck here is relative to the hardware that the runner has. If they're on Astrolabe or Forger, it won't be that painful for them unless it screws up their . If they're running Obelus or Şifr, that's a pretty notable setback. If I had less than 10 and had to choose between trashing Sifr or taking 2 brain damage, I might take the damage. It's like, deeeyaaaamn...

Can't wait to see these in CD with Fenris, Enforced Curfew, and some splash of Snare! or Neural EMPs.

I also love this card in Weyland decks as a Plascrete/Hopper killer. Taking two brain damage against a deck is obscene, so it's a total lose/lose facecheck.

(Daedalus Complex era)
PureFlight 1047
Your math with MKUltra is off. If you are using breakers instead of clicking, you simply ignore the third sub completely. So it's either 6c or 3c + Sucker token. Using clicks to break it is almost never worth it, since it eliminates it's own bioroid weakness completely with it's own conditional third sub. That's the beauty in Zed 2.0. — Krams 28 Feb 2017
Krams's math of 3c+sucker only works for people who haven't already used a clock to break Eli for example. — Goldstep 1 Mar 2017
Yeah, you're right - fixed. — PureFlight 7 Mar 2017