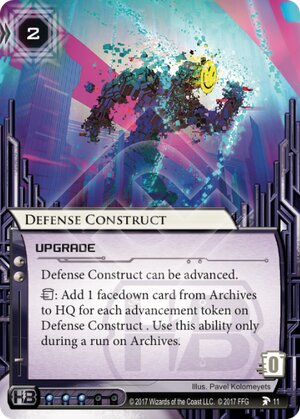 Defense Construct can be advanced.

trash: Add 1 facedown card from Archives to HQ for each advancement token on Defense Construct. Use this ability only during a run on Archives.

It's an advanceable upgrade. So what does that mean? Maybe you can install it in a server, advance it, and leave it there with the runner thinking it was a failed trap? So now you can install a 2/3 agenda (making it look like an upgrade) and score it. Congratulations! You just confused the runner a bit. And instead of having a 3/5 or an over advanced 2/3 you have this card primed and ready to go...

So what about the ability? Ok, it lets you recur cards in Archives. That's useful! But hold on, you need an advancement token for each card you want to recur? And you can only do it during a run on Archives (when they can still run HQ with their remaining clicks)? AND you can only recur FACEDOWN cards? That crap you discarded because you couldn't find what you really need right now? Maybe you can pull some agendas that were DLR'd, or Noise'd, or Maw'd back to safety, but boy do the stars have to align for this card to do even half of what Jackson Howard does.

(Daedalus Complex era)
Tozar 686
Would make for a (terribly) decent Power Shutdown sort of deck... Lol! — LynxMegaCorp 8 Mar 2017
Perhaps the best trick this card has: You put it on Archives and advance it, then you play Power Shutdown, but don't mill any agendas. When they run Archives, rez this and get back econ operations you milled. Now they'll run HQ thinking there are agendas in there, but there AREN'T! HAHAHA! — Netrunnerunner 9 Mar 2017
This card is a pile of garbage with a smiley patched onto it - and I'm not talking about the picture ;) — Krams 9 Mar 2017
Named "DEFENSE CONSTRUCT". Trash cost of 0. Way to go, FFG. The smiley is clearly to troll us. — LynxMegaCorp 9 Mar 2017
Susanoo-no-Mikoto. — H0tl1ne 11 Mar 2017
Putting down Edge of World or Psychic Field as fake upgrades and then putting this down and advancing it once in Jinteki is kind of fun but not successful very often and costs a lot of influence. — butzopower 29 Jul 2017
4

This feels like a pretty bad card. But let's look at the individual aspects of this card before making judgment calls.

It's an upgrade. That's a good thing as it can be installed in any server.

At 3 influence it's unlikely to see play outside of HB.

The trash cost is 0, so any runner will trash this unless you have some other form of protection (e.g. NBN: Controlling the Message).

It requires trashing to activate. That kinda sucks. But it doesn't require a click so you can do it during a run.

To actually do something it requires advancement, one click plus a credit per card.

To add to the downers it only works on facedown cards. So recurring used operations is out.

In terms of common inhibitors (Rumor Mill, Employee Strike, Interdiction) it's vulnerable to Interdiction but not Rumor Mill. That's still not great considering Interdiction is a pretty useful card.

Moving to analysis let's look at what it's good for. It's designed to bring facedown cards into HQ (not R&D like Jackson Howard). This allows for broadly two uses: saving cards from being accessed by the runner and using archives as an extension for HQ.

There are two major sources of facedown cards in archives: forced trash (Anarch speciality, Noise: Hacker Extraordinaire in particular) and overflow of cards in HQ. At the high cost for saving cards from archives you really want to use this for your most valuable cards only, that is of course agenda's. Comparing to the current baseline (Jackson) it's quite an investment (4 + 5) whereas Jackson is 1 + 0. Jackson however is also vulnerable to Rumor Mill and will of course cycle soon.

Other alternatives for card saving during a run are:

None of these are really all that great either. Only Jackson is much better for saving more than one card.

Another use is using archives as extension for HQ. That is, dumping cards you don't need right now and recurring them later. For this use Defense Construct is expensive and alternatives like the unreliable Bryan Stinson, the terminal Friends in High Places and the cheap but limited Archived Memories are probably better, though which one depends on your exact use case.

All in all this feels like one for the binder. There is one caveat to that conclusion however, if FFG adds ways to put counters on cards like Defense Constructs cheaply it could become a moderately useful card in the right deck. Since we're only at pack 1 of Red Sands and FFG likes to spread out combos over multiple packs this is defenitely something to keep in mind.

(Daedalus Complex era)
Silv 315
As a thought to the above, one could rez it in advance if one suspects Interdiction. Or to use dedication ceremony. — lp87 11 Mar 2017
Note that this is the only advanceable upgrade in the game right now, so if you put it on archives then you need the runner to run it while they know exactly what it is. — Absotively 5 Jul 2017