subroutine Move Sand Storm so that it is the outermost piece of ice protecting another server (the Runner continues the run from this new position and is now running on this new server). Trash Sand Storm.

By the time the data storm passed, the landscape was transformed, and she was hopelessly lost.
Jinteki • Liiga Smilshkalne • Crimson Dust 114
All sets:
Links: Decklists | ANCUR 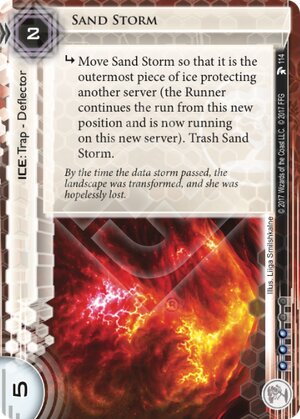 I like to think of Sand Storm as completing part of a deflector suite of ice, which includes Susanoo-no-Mikoto, Bullfrog, Mirāju, and Mind Game. Let's run down what these deflectors do:

All right. So putting aside various rez costs and strengths for the moment, you can see that each of these deflectors perform different versions of the same job: getting the Runner off the server they're running. So how does Darude ahem Sand Storm compare?

Sand Storm's subroutine combines Bullfrog's and Mind Game's server of choice option with Susanoo's and Mirāju's lack of a psi game. However, as a downside, Sand Storm is a Trap-type ICE and therefore trashes itself upon firing, leaving the server open like with Bullfrog. As an upside to the downside, as a Trap, Sand Storm is much more likely to fire against any Runner that isn't running AI.

Since you can choose the server Sand Storm redirects the Runner to, the obvious play is to shoot them to a server with a trap in it. But since Sand Storm has no penalty for jacking out, unlike Mind Game or Susanoo, the Runner can just do that - though if you really want to play mind games, you can send them to a server with an agenda and have them think it's a trap. Whirlpool, Ancestral Imager or Labyrinthine Servers can help dissuade them if you need to, but not having a jack-out penalty built in is a distinct disadvantage.

Sand Storm is a 2-to-rez, 5-strength Trap ICE. That's a great rez-to-strength ratio and pretty on-par with most Trap ICE, which benefit from being cheap to rez and hard to break, with the downside of being one-use. When you compare this to the rest of the ICE in the Jinteki deflector suite, Sand Storm comes out pretty favorably:

On rez-to-strength ratio alone, Sand Storm comes in second, just under Mind Game and above Bullfrog.

So Why Play This Song?

Mind Game is obviously the Big Cheese of deflector ICE, outshining essentially every other piece in the suite. So what we should ask is: why play Sand Storm over Mind Game?

And conversely, why should you play other deflectors instead of Sand Storm?

So having discussed Sand Storm's strengths and weaknesses, there's one final question: How should you play Sand Storm?

tl;dr - Sand Storm has some advantages but loses out to Mind Game in most respects. Would work if you slotted it alongside Mind Game to have more deflectors on hand.

(Crimson Dust era)
Agenarchi 76
Not quite as good as Mind Game, but if you think of this as a Trap ICE that Ends The Run, it's great against click 4 runners and whirlpool. — Handsome Jack 31 Aug 2017
0

Sand Storm, in combination with ice relocation like Mandatory Seed Replacement and Tenma Line, can effectively act as nisei marker for ending the run. This combo would be able to tax the runner massive amounts of credits on an expensive remote, opening a scoring window.