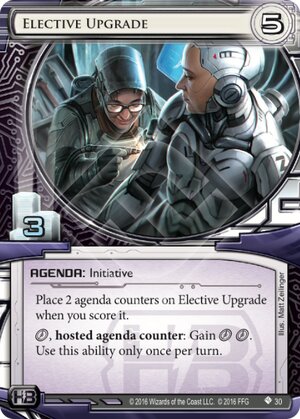 Place 2 agenda counters on Elective Upgrade when you score it.

click, hosted agenda counter: Gain clickclick. Use this ability only once per turn.

HAAS-BIOROID TO CLEAN UP THEIR ACT

In a surprise ruling by the Cybernetics Court this morning, Haas-Bioroid (HAAS) have decided to phase out mandatory upgrades for staff and service crew, citing grievances from the extensive employee strike last Friday. The megacorporation issued a public statement this afternoon on the controversial scandal that has has New Angeles reeling and Haas-Bioroid under heavy scrutiny:

"We believe the late Isabel McGuire to have tampered with her augmentations in such a way as to endanger her well-being, and ultimately her life. At Haas-Bioroid we maintain the highest degree of health and safety protocols for all our products, bioroid, augmentation, or otherwise. We offer our sincerest condolences to Miss McGuire's family. However, it can be shown that her golf swing improved by 4500% over the weeks leading up to her arms exploding, which demonstrates without a doubt the effectiveness of Haas-Bioroid products.

In either case, Haas-Bioroid will be making every effort to comply with the Court ruling, starting with rolling out a series of elective upgrades that employees may access on company credit. Our specialized committee believe this to be the most efficient way to move forward in these troubled times. Now more than ever we must hold, and be, stronger together."

When pressed for comment, Haas-Bioroid executive Estelle Moon added, "We understand many of the strike's concerns involved cronyism at the highest levels of the company. Haas-Bioroid would like to assure them that thanks to the Boggs Act, they shouldn't need to worry about people leveraging friends in high places for an unfair advantage anymore. The same goes for the controversial clone suffrage movement in Mumbad, which has been brought under control after much repeated effort."

It seems that for the moment, Haas-Bioroid is willing to step back and clean up in the wake of the Boggs Act. What this will mean for New Angeles, only the future can say.

As far as I can tell this isn't so much an FA card as it is something more specific: A win condition in and of itself. Note that once you score it, you can FA two 3/2 agendas using the ability and this is exactly 7 points. It's kind of like the HB AstroTrain, if that required a 5 cost Agenda to get going.

So the deck would contain these, a bunch of 3/2s, and supporting tech with which to score a 5/3. I'm actually legit rubbish at building Corp decks so I'll leave the exact formulation of this as an exercise for the reader.

(Terminal Directive Cards era)
LordRandomness 232
Since you only need to protect the scoring remote for 1 turn a setup with Howler and Awakening Center plus nasty ice might work. — Silv 9 May 2017
3

Seems like a great agenda for HB Fast Advance decks - if you manage to score this early, it's basically two Biotic Labors worth of extra benefit - so a gain of 8 credits and 2 cards / clicks worth, with the only disadvantage being you can't "play" both in the same turn - but you don't really need that. Score this, then every other 3/2 agenda you have in you deck, and you have at least 6, is scorable from hand. Score 2 out of those 6 and you win (be mindful of Clot though).

Alternatively, if the board state allows, you could install an Accelerated Beta Test and activate the Elective Upgrade token next turn, so you have a click left to install a Jackson Howard and / or play Archived Memories / Friends in High Places to fix any misfires. It also saves you the influence you previously had to spend on Global Food Initiatives, so perhaps now you can fit another half of a Caprice Nisei or a Tollbooth?

The downside is of course that now the runner can win stealing 3 agendas, since you're no longer running the GFIs.

(Terminal Directive Cards era)
Qris 47
The problem with 5/3's in a fast advance deck however is that by their very nature they don't advance very fast. So even if you get them at the right time (a big if) you're going to have them relatively exposed since fast advance decks typically are weak in the remote defense department. — Silv 2 May 2017
It could work out in a rush deck though, fast track for this behind some good gearchecks. HB generally got plenty of cash anyways. — HyenaMars 3 May 2017
Also Preemptive Action WRT misfired ABTs. Don't forget Jeeves. Jeeves+EU token = score Corporate Sales from hand (I've done this with Jeeves+Biotic a lot). Jeeves+Biotic+EU token = Score 5/3 from hand. Anyway, it's the first 5/3 for awhile (ever?) that makes me even think about taking out my GFIs. — CascadeHush 3 May 2017