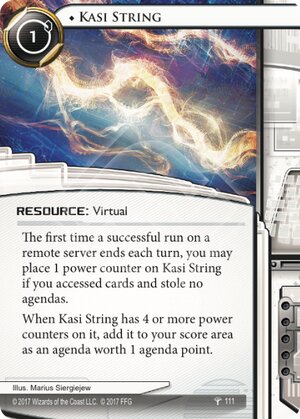 The first time each turn a successful run on a remote server ends, if you breached the server but stole no agendas, you may place 1 power counter on this resource.

When this resource has 4 or more hosted power counters, add it to your score area as an agenda worth 1 agenda point.

Kasi String is a really bizarre card. You have to make a successful run on a remote server and access cards without stealing an agenda. This is something that just won't happen four times over an entire game against most corporation decks, let alone happening four times over four different turns fast enough to "score" Kasi String should you draw it late in a game. But access to points in the runner card pool is pretty rare and always conditional, and in the right matchup Kasi String does compare favorably to Notoriety.

The matchup where you will regularly access remote servers without stealing agendas is against asset spam. Decks for IDs like Controlling the Message and at least some Asa Group and Replicating Perfection decks will leverage their identities to protect lots of assets that generate a strong drip economy, or else force you to burn your precious credits trashing all their stuff. Against these decks, Kasi String provides a good reward for running on all those agenda-less servers in the form of additional points. I think it is pretty pheasable to slot 2x Kasi String (or maybe 1x if you can dig for it with Gachapon) and expect to score that additional point in these matchups, accepting that your tech card will be dead against more conventional Corporations.

Just like Notoriety, Kasi String might let you close out a close game where you've run aggressively and stolen early agendas before the corp can fully establish their economy and safely score. This is certainly desirable against asset spam, as most runner decks are a bit faster and aggressive than they are, but that gap gets much closer when you're having to tread carefully around SEA Source or Hard-Hitting News. Given the existence of cards that can punish you so harshly for falling behind on credits, you are probably better off fighting asset spam on the same economic axis and playing a card that helps you trash their assets, such as Scrubber or Miss Bones, and this is definitely true if your runner deck also needs time to get its own drip economy going. You just can't run and trash an asset every single turn against these decks without heavy economic support - they're built to make that as difficult as possible - and so Kasi String ends up having to play second fiddle to cards like Scrubber. You could play both kinds of cards, and Scrubber definitely supports Kasi String well, but this is only viable against a meta with a lot of asset spam.

Still, I find myself appreciating the design of this card a lot. Netrunner has always had a back and forth between corp and runner with "silver bullet" cards that really challenge particular decks and shore up weak matchups, and Kasi String is a really interesting and novel card of this type. Maybe there's a home for it in the future, although hopefully not in a context with an excess of prison-style asset based decks.