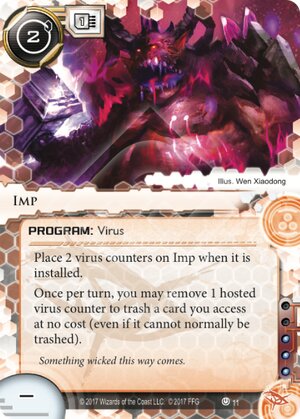 When you install this program, place 2 virus counters on it.

Access → Hosted virus counter: Trash the card you are accessing. Use this ability only once per turn.

Something wicked this way comes.
Illustrated by Wen Xiaodong
Decklists with this card

(Order and Chaos era)
Ber 2615
"As long as you don't use the last virus counter on an Imp, Virus Breeding Ground can be used to recharge it every turn" — NerdimusPrime 10 Mar 2015
Why is that? I don't see anything about Imp being trashed when the last virus counter is removed. — NerdimusPrime 10 Mar 2015
Never mind. I didn't read Virus Breeding Ground closely enough. — NerdimusPrime 10 Mar 2015
If my logic is correct, you could also use this to trash a card already in the archives. Sounds useless, but imagine the look on the corp's face when you trash that Director Haas they thought was safe in archives and score it. — TheBytemaster 10 Sep 2015
...nevermind, found the ruling on that. Dang. — TheBytemaster 10 Sep 2015
6

In addition to the straightforward uses of Imp (trashing expensive things for free and trashing operations), Imp can be used as a poor man's Film Critic. Against, for example, Obokata Protocol, you can trash it in the remote and pick it up later in Archives when you are ready for it. Against The Future Perfect, you can play the Psi game, lose, then trash it (or win and steal.) Against Punitive Counterstrike, you can delay the steal by trashing the agenda, waiting until you can beat the following trace or just straight win from points first. You can trash any agenda because the window to trash occurs before the window to steal.

Imp does not, however, avoid any on-access punishment just as trashing an ambush does not prevent its negative effects. Casting Call/TGTBT will still tag you, Quantum Predictive Model will still jump into the Corp's score area if you're tagged, City Works Project will still do meat damage, and Explode-a-palooza will still give the Corp credits, whereas Film Critic avoids these effects. And you still have to steal the agenda from Archives to take its points (assuming the Corp doesn't recur it back with Preemptive Action or Archived Memories.)

This card is about to become insane when Friday Chip becomes legal. Especially if you can install multiples of them. Trash something with a token off of Imp to place a token on Friday Chip, then replace it (or multiples, if you have multiple Friday Chips installed) at the start of your next turn. Wew! Progenitor support to keep the Corp from throwing their hands up and purging the paper-shredder you've put together.

(Crimson Dust era)
An0n3 27
you don't even need a Progenitor, almost all Corps will have something to trash once anyway, trash one for the iron price and go back to shreddering ;) — Sutlomatsch 11 Jan 2018
1

If you want to trash a corp card, Imp is the best for that, followed only by Stargate. Imp give you the option to trash the card, even if it does not have a trash cost (this last part is important).

This will deny the corp options for their game plan. It does not matter if the card is expensive to trash, like SanSan City Grid or Jeeves Model Bioroids.

This will also let you trash agenda. This is especially useful against Jinteki: Personal Evolution, since it avoid the cost of stealing the agenda. But it also avoid the problem of the corp using Punitive Counterstrike after you would have stolen the agenda. Since it was not stolen, it cannot be used against the runner. Note that recursion tool can be used by the corp to safeguard themselves against trashing effect (Spin Doctor, Genotyping, Preemptive Action).

This is nearly a mandatory card for René "Loup" Arcemont: Party Animal, since it enable the ID in a major way..

You can combine Imp with Friday Chip or Knobkierie to keep it relevant throughtout the game, since it will then never lack virus token.

Of course, like any virus, this will combine with Cookbook, to get more mileage from Imp.

At 3 influences, it is tough to use it out of faction, but it is often worth it. In the early game, Imp is devastating for the corp. 2 to trash 2 cards (no matter what), is a bargain. So much so that it is worth it for the corp to purge as soon as the card is on the board.