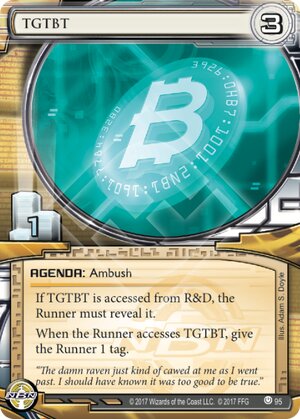 If TGTBT is accessed from R&D, the Runner must reveal it.

"The damn raven just kind of cawed at me as I went past. I should have known it was too good to be true."
Illustrated by Adam S. Doyle
Decklists with this card

Too Good To Be True

Sometimes scoring TGTBT can loose the game for the runner making it an agenda that the corp often WANTS to have stolen.

Punish with tags immediately: SYNC: Everything, Everywhere is an identity custom made for adding salt into the runner's wound whose been tagged, additionally rezzing Dedicated Response Team just before runner accesses TGTBT, give the runner a little taste of what could be in store with the next combo

All tag & no joy: What better way to show the runner your appreciation than to give a tag for free but avoid burdening him or her with an agenda! For example if the runner isn't quite able to cough up the 5 extra cost from Red Herrings they will access TGTBT but not steal it, taking the tag but no agenda. Similarly Strongbox allows the runner to access TGTBT gaining it's tag(s) but unable to steal it if there are no extra s to do so. Furthermore say more than one Agenda is in Archives when the runner accesses Archives, with Haarpsichord Studios: Entertainment Unleashed any copies of TGTBT will be accessed and therefore generously giving tags regardless of whether they are stolen or not (only 1 agenda would be stolen in such a scenario).

Punish with tags if runner goes Tag-Me: It's helpful to have some tag-based options to punish the runner in case the runner isn't able to clear the tag or (foolishly) chooses to go tag-me. Any of the following are examples of combos that could demonstrate to the runner the disadvantages of not clearing tags and why TGTBT is indeed Too Good To Be True: Big Brother or Midseason Replacements to pile on yet more tags followed perhaps with Psychographics to score agendas rapidly or Scorched Earth to go for the kill or Private Security Force to grind the runners grip down, Bad Times to mess with the runners rig of programs, Closed Accounts to target the runner's credit pool, score Market Research as a 4/3 agenda, Freelancer or The All-Seeing I to more efficiently trash resources and possibly Traffic Accident (if TGTBT causes runner to actually have 2 tags) etc

Second Guessing Runner: TGTBT along & NAPD Contract (just like Fetal AI for Jinteki ) etc, are taxing agendas that may give the runner second thoughts before running prompting questions like, "Do I have a enough to make a run right now?" or, "Do I have enough s right now?" etc such hesitation itself may provide lost momentum or lost opportunities for the runner.

Deal out some meat: Punitive Counterstrike may be able to strike the final blow the a runner thinking that clearing tags makes oneself safe

Tag from anywhere: Regardless of where accessed, even from Archives TGTBT is going to put a tag on the runner

Tempo-Tax: Picking up a tag from NBN is going to put a fair amount of pressure on the runner to clear tags, starting from 0 could cost the runner up to 3s and still keep the corp relatively poor and low on momentum

Multiple Tag Windows: With 3 copies of TGTBT, each potentially provides an opportunity to tag a runner who is desperately trying to avoid tags,

Score them: Runner not taking the bait? 1 point for each TGTBT for a maximum of 3 is not a bad consolation

Take it: Giving points away to the runner for free certainly raises the risk of losing the game later

No Tag-Me: Particularly with resources like Decoy (or other tag-avoiding methods) the runner can steal the agenda and the corp may end up with nothing in return. Even with the tempo hit of clearing the tag, it still may be a net positive for the runner.

TGTBT is certainly at home with NBN's philosophy of tag-induced punishment. 1 agenda point seems right for what it does. Providing flexibility and a fairly reliable way to get the tag-game started TGTBT is a solid agenda worth considering.

(Data and Destiny era)
chris_walker 676
Missed the most awesome and the most obvious combo: with the cards that give an additional 'stealing' cost to agendas. This agenda does not require to be STOLEN, just ACCESSED, to give a tag. With Red Herrings, runner might access this agenda, get a tag and be unable to steal it if he has no money. With Strongbox, he will access this agenda and get a tag, but without a click to spare, he won't steal it. And Haarpsichord just prevents him from stealing second agenda, so if this is a second one this turn - he gets tag for free. — Shieldwall 14 Dec 2015
Shieldwall! You are my MVP! Given your experience (selfishly) I'd like to ask, why aren't you writing these reviews? It would certainly save me a lot of time! Thank you again, your suggestions have been added to the review. — chris_walker 14 Dec 2015
Film Critic is a counter, probably not worth mentioning. — LynxMegaCorp 14 Dec 2015
Is Film Critic really a counter? Seems to me the *when Accessed* condition occurs but only for a moment, but long enough for TGTBT to give it's tag... If the wording were *Instead of accessing...* it would be easier to see the hard-counter happening. I'm not speaking from conviction just saying how I perceive it to be. — chris_walker 14 Dec 2015
This worries me. — LynxMegaCorp 14 Dec 2015
Please elaborate — chris_walker 14 Dec 2015
Film Critic ignores any 'on access' effects. Being the Runner's turn, their effects resolve first. Film Critic activates on access, and states 'no longer being accessed', so the Corp's effects do not trigger. Had Film Critic not made that distinction, it would be almost pointless to play (protecting only from Midseasons and Punitive, possibly Argus). — LynxMegaCorp 14 Dec 2015
Fair enough, looking at the Film Critic review page I'm glad to see I was not the only person getting hung up on the wording. Might be nice if in the next FAQ FFG could clarify the wording to help daft people like me. — chris_walker 14 Dec 2015
Page 11 of the newest FAQ (2.2 released over a month ago) actually does state exactly that: "After Film Critic's 'when accessed' ability resolves, any remaining 'when accessed' abilities are non-resolvable." For what it's worth, I think Lynx might be being a little harsh on you considering that you really only write these for cards that don't have reviews already and you are usually quick to edit with suggestions and other comments. It would, of course, be better if someone with more experience with the card and its various interactions wrote the reviews, but seeing as they aren't... — Sabin76 14 Dec 2015
Downloading FAQ 2.2 right now, (mistakenly thought that netrunnerdb.com had the most up-to-date FAQ. It's not fun taking criticism, but I do appreciate the opportunity to fix reviews. I am learning a lot in the process which is a really nice side benefit of filling in these missing reviews. Writing a reivew a day takes quite a bit of time so to be honest I would really prefer if others could step in and do these reviews! In the mean time, thank you everyone for the support (corrections) & encouragement etc — chris_walker 14 Dec 2015
I was nice enough to explain, though. What worries me is someone writing reviews with very limited knowledge of the cards, rules and quirks. — LynxMegaCorp 16 Dec 2015
Lynx, yes I very much appreciate your explanation. Make you a deal, for every day that you write a review for an un-reviewed card, I'll take the day off and just read your review instead. — chris_walker 16 Dec 2015
I love writing reviews, but decided not to until I had a proper handle on the game. I suppose I could tackle my favorites while I have pc access. :) — LynxMegaCorp 16 Dec 2015
This makes me happy! — chris_walker 16 Dec 2015
chris_walker you have the patience of a saint. Thank you for your thoughtful reviews! — senojmas 20 Feb 2017

“Most hackers ask for payment before services that they do not still render at the end but I want to introduce you to a university master’s degree holder of Princeton in Finance as well as computer geek for any sort of hacking, it can be Social Media Accounts, Forex Trading Forecasts, Credit Reports/Credit Score Lifting, School grade, Email, Credit card, contact him ( WIZARDBRIXTON AT GMAIL DOT COM) Phone hacking, Erasing criminal records, Bitcoin recovering, Instagram Hack, Facebook Hack, Lost funds recovering, Tender hacker, get Access code of the different type of phones, etc., you name it. he shows proof of work and payment is made only after service well done to your satisfaction Contact him: WIZARDBRIXTON AT GMAIL DOT COM, WhatsApp : (+1- /807-23 4-0428