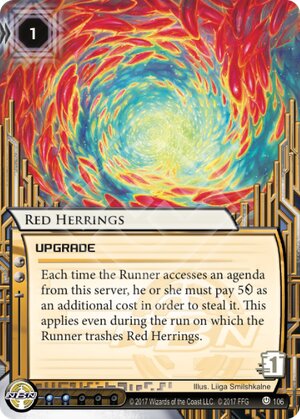 Persistent → As an additional cost to steal an agenda from this server, the Runner must pay 5credit. (If the Runner trashes this card while accessing it, this ability still applies for the remainder of this run.)

Red Herrings is NBN’s protection upgrade, like Caprice Nisei and Ash 2X3ZB9CY, but it has not seen nearly the same amount of use. Most likely this comes from its low trash cost and its inability to protect anything other than agendas. Caprice protects herself by stopping the run, Ash costs three to trash so its more of a tax, and can protect other cards (Such as Caprice) in the server.

Red Herrings might be a card that is worth recurring however. Combined with Predictive Algorithm and maybe encountering an NAPD Contract the costs are huge for the runner to steal. As more agenda protection such as this occurs, or with other agendas that protect themselves (such as Fetal AI) this card can become more important. It would be surprising at all to see this card making a return in Never Advance style decks, especially post Clot.

(Breaker Bay era)
lynkfox 380
It also only works on agendas, but you can do a 5-cred drain with explode-a-palooza — NobbyNobs 1 Feb 2016
At 2 influence, it's unlikely to be used outside of NBN, particularly with Ash also at 2 influence. Goes well with RSVP though. — EnderA 6 Aug 2016
2

This is written with the meta of the end of Flashpoint cycle, but my personal meta is more reduced since I play with more reduced pool of cards.

Well this is card that, as same as Ash 2X3ZB9CY or Caprice Nisei it makes the runner come again in order to steal agendas.

-Inmune to Rumor Mill since it's not unique.

-Since it's not unique it can stack, but it's only 1 or 2 to the runner to spare.

-You need the runner poor and/or clicless.

Ideas to make it work:

Nowadays it seems that it's impossible to have a runner poor with Temüjin Contract but apart from that card (that I don't have in my card pool yet so I haven't figure how to drive with it) you have several options.

-You take all the money down with a tag and a card. Good ol' Closed Accounts.

-You're Spark Agency: Worldswide Reach so you make him/her lose 1 credit per turn. (with the help of lots of ads)

-You're Gagarin Deep Space: Expanding the Horizon so they have to pay and pay not to destroy, but to access. (but 2 inf per card is quite too much, maybe)

-You're NBN: Controlling the Message so if they trash they have to pay to avoid the tag.

-You make them lose clics with Ronald Five (expensive in influence but worth it) so they can't run again.

-You may also have some Encryption Protocol to make it more expensive to thrash.

-You may forfeit False Lead. But maybe that card has better uses. (avoiding that the runner takes out a tag, f.e)

-You use biorroid ice, always taxing in clics (in early game)

-Ice that makes the runner lose money, such use Tollbooth or Financial Collapse, even DNA Tracker

-You can use Victoria Jenkins but wow. It's kind of risky.