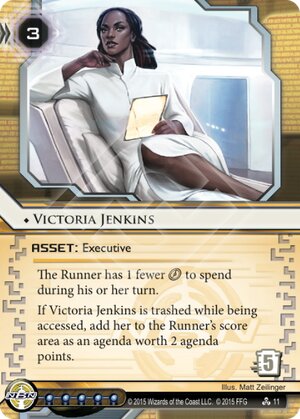 The Runner gets -1 allotted click for each of their turns.

When this asset is trashed from anywhere while being accessed, add it to the Runner's score area as an agenda worth 2 agenda points.

Having one less click would certainly be bad for the runner. Especially if they have a Wyldside or the like out with no Adjusted Chronotype. But realistically it probably wouldn't take the runner too long to get the credits/breakers they need in order to trash this card and net themselves 2 points. In the meantime, this card isn't going to make scoring agendas too much easier like Director Haas or bring them closer to a flatline like Chairman Hiro. Those are both game winning scenarios, whereas losing a click each turn is more of a temporary thorn in the runners side.

When combined though, with bioroid ice, Haas-Bioroid: Stronger Together, and Enhanced Login Protocol it would be especially effective; forcing the runner to pay through enhanced bioroid ice is pretty taxing. At 5 influence though, it would take up most of your space if you included even 2 of these.

I think I came up with another way to use this card though, and in faction. If you rez this card on the runners turn, they would immediately lose a click yes? I believe so. In that case, combine it with Heinlein Grid. As long as the runner has a spare click when running at your Heinlein server, you could rez both Heinlein and Victoria, forcing the runner to lose a click and all credits. Then hopefully they won't be able to trash your Heinlein or Victoria if she is in the same server. They won't be able to steal your NAPD Contract. Then with only 3 clicks per turn, it will take the runner more time to recover from losing all credits. I think this combo would be fun to try with Spark Agency: Worldswide Reach as your id. After losing all credits, you could help keep them poor with well timed advertisements. One other thing that would be great would be: when they finally have to money and they run again at your server, you could have a single advanced Test Ground ready. Midrun, you could use test ground to derez Victoria, then immediately rez her again. The runner would gain a click and then immediately lose one, again activating Heinlein. This would be super hilarious in my opinion.

Is this card competitive? Perhaps not. I only play casually though, and enjoy trying new cards and new strategies. I'm going to try her out.

(Data and Destiny era)
quailman2101 274
Heinlein won't work, as Victoria says "has 1 click fewer" and not "loses a click". Same with Test Ground. As for the bioroid combo you might consider including Strongbox along with ELP. — chom 28 Nov 2015
Are you certain? Say the runner makes a run on their second click, they have 2 clicks remaining. If you rez her during the run her ability becomes active. In order to have one less click for the turn, the runner would have to lose one; at least in effect. Perhaps that is not the same thing as "losing a click" for purposes of heinlein grid, but they would lose a click. — quailman2101 28 Nov 2015
Effect templating is very important. I imagine this will ultimately be answered in a future FAQ. — Sabin76 28 Nov 2015
I believe Heinlein activates on cards that either 1) say loses a click (such as Troll, Enigma or Hourglass) or 2) causes them to pay (bioroid breaking Strongbox, etc). Victoria simply removes the click, quite a distinction from lose / spend. Sad, because I got excited reading this! — LynxMegaCorp 29 Nov 2015
Without needing an FAQ I am confident the Victoria Jenkins / Heinlein theory is a no-go. As you guys are saying, wording is key, Victoria doesn't force the Runner to lose a click, they simply have three clicks to spend instead of four. — Mechanoise 18 Dec 2015
2

Tori Jenkins and the Clickless Clone or, The Jankiest of the Janky or, Why Would You Do This To Me or, How to Lose a Boyfriend in Three or Less

I'd like to share a story about Victoria Jenkins here - one that may or may not actually be useful, but sure as hell is interesting :P

Just for fun, I decided one day to put three copies of Vicky into a Jinteki: Replicating Perfection deck. Of course, this took up all fifteen influence points on poor Jinteki's identity, but that's of course beside the point. Now keen-eyed readers have spotted my potential game plan already: since a Runner needs to run once on a central server before any remotes can be accessed, if a certain savvy Corp were able to install and rez all three copies of Ms. Jenkins, you could theoretically reduce a Runner's 4 into a measly 1 , rendering them unable to run on any remote servers!

Of course, what about cards like Joshua B. or All-nighter? Early Bird or Amped Up? Hyperdriver or Doppelgänger? Hell, Temple of the Liberated Mind when it comes out? How do you defend against these pesky "gain " cards?

Adjusted Chronotype doesn't work here, as Tori is causing the runner to have "one fewer " as opposed to "lose 1 ".

The answer is that you can't! Realistically, this is a tactic to buy precious time. Saying that this slows the Runner's tempo down is like calling a car crash a minor inconvenience. The main power of doing something so utterly insane is in the surprise factor. If you catch the Runner unprepared (as I did in this particular game), being restricted to one a turn makes it nearly impossible for them to recover. Without any of those cards already on the board, my opponent was reduced to clicking for credits and drawing from their deck in the hope that 1) they would find something usable and 2) be able to afford it when it did come up. Meanwhile, I happily lined up my agendas in a row and piled a glacier of ICE on my centrals, until eventually my opponent pleaded for me to "just... just end it, please".

"If you pull this shit again we're breaking up."

(Salsette Island era)
Agenarchi 93
She's unique. You can only have one rezzed. — enk 11 May 2016
You are of course welcome to have all three installed but only one rezzed. Leading to your opponent potentially swooping in and garnering 6 agenda points with very little hassle. — Siaphes 11 May 2016
That... makes an alarming amount of sense, actually. Oh well. It was a fun game nonetheless :3 — Agenarchi 12 May 2016
It's nice when people learn the rules before playing. :) — LynxMegaCorp 13 May 2016