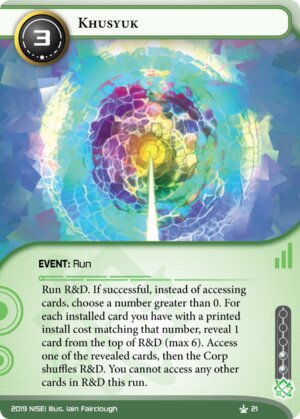 Run R&D. If successful, instead of accessing cards, choose a number greater than 0. For each installed card you have with a printed install cost matching that number, reveal 1 card from the top of R&D (max 6). Access one of the revealed cards, then the Corp shuffles R&D. You cannot access any other cards in R&D this run.

Illustrated by Iain Fairclough
Decklists with this card

As of Downfall, setting up 5 or 6 installed cards with the same cost is surprisingly difficult in practice. Realistically the cost must be 1, 2, or maybe 3. Otherwise it's too resource intensive to set up, and the number of cards of a given cost drops quickly beyond 3. Ideally there is a core installable (or more than one) that you intend to install multiple copies of. E.g. Tech Trader, Gang Sign, Akamatsu Mem Chip, Clone Chip, NetChip, and Power Tap are all cheap and can be central to the game plan. There are also some generic cards of those costs to throw in, like Astrolabe, Bankroll, Datasucker, "Baklan" Bochkin, Beth Kilrain-Chang, Hippo, Kati Jones, Rezeki, and The Turning Wheel.

However, if your deck happens to align with those constraints, it is an incredibly efficient R&D access card for mid-late game. Seeing up to 6 cards makes seeing a value target extremely likely even in a sparse R&D. Shuffling afterward means no need to wait for the seen cards to filter through HQ to see fresh ones, R&D remains just as porous afterward. A forced shuffle is a rare effect, which you can use strategically, such as immediately after a CBI Raid, akin to old Keyhole runs. And unlike Indexing, you only need to run once to access what you reveal (with no possibility of being interrupted.) It's only 2 influence a copy, which means it can easily find room in Anarch or Criminal.

Despite a few advantages, it's clearly not as powerful as Indexing was. Reliance on installed cards means you can't blitz R&D with it turn 1. Shuffling post-access means you're left with no information about what the corp will draw afterward. Accessing one card means that even if you reveal several agendas or crucial trash targets, you only get to access one, and if it has a steal-restriction then you can't try again later (this can be mitigated with Film Critic.) And there's the fact that it costs 3 credits.

Because of its restrictions, I find it unlikely that you can build a deck around it like you can Insight + Top Hat. And you don't need to, there are other options for R&D pressure. But if you're building a deck, take a peek at your install costs. If you're already close to critical mass, consider the pros and cons of tweaking it to allow for a powerful and efficient R&D access event.

(Downfall era)
EnderA 485
If i use Eater, do i still get to access the 1 card from the revealed pool ? Does Khusyuk's "instead of accessing cards" overwrite the Eater's "can't access more that 0 cards" section with a new reveal event, and at the end of it, i can access no more that 1 card ? — z3r0cul 9 Oct 2019
No, cannot effects usually supercede everything else. Using Eater during a run prevents you from accessing any cards, hence you can't access the card from Khusyuk's effect — Cpt_nice 9 Oct 2019