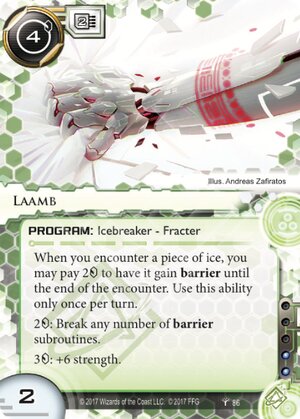 Whenever you encounter a piece of ice, you may pay 2credit. If you do, it gains barrier for the remainder of that encounter. Use this ability only once per turn.

I've been playing around with Laamb since it was released and found it to be quite the good fracter, so imagine my surprise when I discovered it's not Paperclip.

As a support breaker, it's fantastic. It's pretty much an AI without all the hate. Get this bad boy out early and you can contest any single-ICE'd server as long as you have 7 in the bank. Mid-to-late game and you don't have to worry about any pesky traps or other shenanigans.

That's less interesting, I think, than having Laamb as your only breaker. Unlike it's counterpart Engolo, this one can let you surf through any ICE protecting a server for 2 a piece. That's right, pile on the economy and make one beautiful glory run each turn. With the right set up, you can start making a profit on the weaker servers.

(Whispers in Nalubaale era)
Am 69
If i advance Changeling, via paid ability, assuming that runner has priority and applies double barrier, does the “looses barrier” effect activate ? — z3r0cul 5 Jun 2018
That's one hell of a janky question lol. I'm inclined to say yes, Laamb's ability would fizzle since Changeling has a perpetual condition on it as opposed to an on-encounter effect. — BlackCherries 5 Jun 2018
Changeling has the subtype "Barrier" to begin with. Advancing it via paid ability removes the innate "Barrier" subtype and replaces it with "Sentry". There's no limit to the number of subtypes a piece of ice can have, so if the runner has applied (or indeed subsequently applies) "Barrier" as a subtype via Laamb's ability, then Changling will have either Subtype: Barrier AND Sentry (odd # of advancements) or Barrier AND Barrier (even # of advancements). In either case, Laamb would be able to interact. — HandKing 6 Jun 2018
What ruling sets the precedent for that though? Why doesn't Changeling lose the "barrier" it gains from Laamb's ability as well? It seems like the condition is just "while Changeling has an odd # of advancements" which seems perpetual. The question could definitely use a UFAQ ruling. — BlackCherries 6 Jun 2018
Checked the UFAQ rules on "Gaining and Losing Subtypes" where it notes a running total of subtypes should be kept. So in this case, Changeling would start with +1 Barrier, then have +1 Sentry/-1 Barrier (after advancement) then Laamb would give it +1 Barrier. Contrary to what I said yesterday, Laamb WOULD work and Changeling would become a sentry/barrier until the end of the encounter. — BlackCherries 6 Jun 2018
But wouldn’t Laamb addition happen first since is the runner turn. My ruling would be having Changeling start with +barrier, Laamb apply +barrier and after advancement become -2 barrier +sentry. Or so i hope :) — z3r0cul 6 Jun 2018
Changeling doesn't say "lose all instances of barrier" just "loses barrier" so it's probably safe to assume that it's only -1 barrier. — BlackCherries 6 Jun 2018
1

Laamb has replaced both Battering Ram and Morning Star in my Modded Shaper deck, and it's been an absolute superstar.

First, it's a really strong fracter by itself. It has Morning Star's "break any number of subroutines" quality of life, but doesn't cost an arm and a leg. Its boost cost is high, but when paired with cards like Dinosaurus, you can both offset its cost and save money on how often you have to boost it.

Additionally, and I think this is its real strength, it's got a sort of "soft AI breaker" effect to it, where you can smash a non-barrier once per turn (without catching the attention of our stabby friend). It's a super strong effect that really shines in the earlygame where you don't have to plow through mountains of ice, and it sometimes forces the Corp to ice a bit harder than they'd like.

All in all it's a solid breaker, easily my favourite fracter in Modded so far.

(Whispers in Nalubaale era)
ladybunne 93
You know what else is popular in Modded because of Laamb? Wall of Static ;) — BlackCherries 21 May 2018