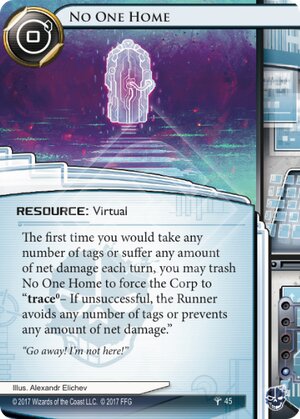 No One Home 0[credit]

"Go away! I'm not here!"
Illustrated by Alexandr Elichev
Decklists with this card

No doubt about it, this card is fantastic and you're going to be seeing it a lot before too long. If you're not sure why, then you're probably new to Netrunner, so allow me to explain:

Corps can win in two ways, agenda points or kill. When it comes to the latter, while there's three types of damage (meat, net, and brain), you'll really only ever see two of them in a serious competitive setting--Sorry brain, you're expensive and less useful than you immediately seem. When it comes to meat and net damage, they're dealt in two different ways. If meat, then the corp is going to land lots of tags, because that's the only way to turn on their ability to do so, at least to reliably threaten a kill. When it comes to net, they're likely to give you a ton of tiny cuts, with a few big ones here and there (or at the end of your deck) to try and finish you off, or at least create a tempo swing big enough to do something nasty, like score. There's exceptions abound of course, but once again, in a competitive setting that's what you're likely to see. It's reliable, it's established, it works.

Now, there's more than a few cards out already that help protect you from the dangers I just described. Misdirection and Deuces Wild are excellent at removing tags suddenly when the corp thought they had you right where they want you, and Sports Hopper and Jarogniew Mercs can either make your hand too big to frag or just plain take the hit for ya. When it comes to net damage, every Jinteki player alive already knows how awful it is to see a Feedback Filter or Caldera. So if there's already so many good solutions, why am I so confident No One Home will become popular? BECAUSE IT'S SO DANG GOOD, WOW.

Misdirection and the Mercs are good, but they're both specifically for meat and pretty silver bullet-y besides. Same for the Filter and Caldera with net damage, with the added problem of the both of those cards being pretty darn expensive to make use of; if you don't have the strong econ, good luck using those more than a handful of times.

No One Home has none of these problems. It's zero credits to play (and theoretically to activate as well), so it'll never be a tempo swing; if you've got the time and you suspect death, there's never any reason not to slap this down. It's only one influence too, which means that any runner of any stripe can make use of it. But most importantly, it doesn't just protect against one of those types of kill. It protects against both. Whether the corp is planning on giving you a hard hitting tag storm or annihilating you with a Ronin, No One Home protects you. Sure, they can circumvent it with a strong trace, but good luck with that corp, you just spent a ton of your credits and clicks trying to make it land in the first place!

Heck, they don't even have to be trying to kill you with meat damage. If they're just trying to tag and punish you, it stops that too! NBN: Controlling the Message got ya down because you just trashed a Mumbad Virtual Tour? Well you may not be able to avoid the ID tag, but you can avoid the two tags you'd get from AR-Enhanced Security, and that's undeniably valuable.

Now sure, it does have some downsides. It's a resource, and a zero cost one at that, so it's vulnerable to a fair amount of cards, cards you're likely to see at least one of at your local tournament. Plus, if the corp is at a 100 credits and you're at 10, it doesn't matter how many of these you've got slapped down--Say your prayers.

Still, do you want protection from tags, meat, and net, all in one place, that's easy to use and way less of a silver bullet than every other option? Just remember that when the corp comes knocking, there's No One Home.

(Council of the Crest era)
Gerrark 184
I'm glad you pointed out its downsides. Best Defense is already used a lot for SacCon and Tapwrm hate and this card just got added to the list. There was another downside that you forgot to mention and that is that the card is limited to "first time this turn". Aka the runner is put into a hard decision when the corp SEA Sources click 1. Use NOH right away? Or let it be trashed click 2 for the HHN click 3? — BlackCherries 1 Mar 2018
One thing this does differently than other tag hate is protecting you from tags on the corp's turn. Citadel Sanctuary, Crash Space, Deuces, Misdirection, all amazing cards. Buuuuut, they won't protect you from Sea Source into Exchange of Information or All-Seeing I. Before this we had On the Lam, but this card is strictly better because it prevents any amount of tags/net damage, unless you can't outmoney the corp. — Cpt_nice 2 Mar 2018
Oh also, this is absolutely nuts in Sunny — Cpt_nice 2 Mar 2018