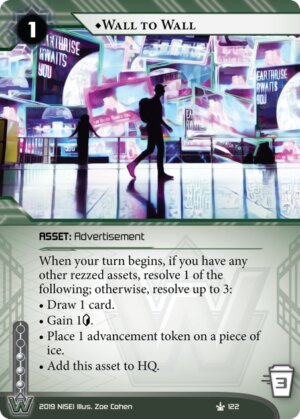 When your turn begins, if you have any other rezzed assets, resolve 1 of the following; otherwise, resolve up to 3:

I'm not sure if there are other cards that are basically a must-include in a particular Corp deck, but Wall to Wall is built for Earth Station. Note that it only activates three abilities if you only have one asset rezzed. Earth Station, no matter the side, only allows for one remote server. In fact, aside from Rashida, this was the only Asset I had in my "not-quite-GNK" Earth Station deck at my LGS.

So why is this built specifically for Earth Station? As I said, this only kicks in if there's no other rezzed Asset. Apart from Rashida, this was part of my Earth Station glacier (which was devastated by an Alice running Apocalypse round 1). That's beside the point. If there's only one server, you can fire off three abilities, so it's perfect for Earth Station. You can get a credit, draw a card, advance that Colossus so the poor Runner has to trash their Progenitor hosting Aumakua when they face-check it at 4 strength. Or, if you have an agenda you want to slap down, simply bounce it back with the fourth ability. This is a powerful Asset that becomes weaker in Asset Spam decks, but in single server decks, it is a terrifying thing to go against. Why? It gives you three clicks worth of things to do before you even do your mandatory draw. This is precisely why I feel it was made specifically for Earth Station: it benefits most from the limit of one remote server. Wall to Wall is unique, so you can't spam it; you're stuck with the one. Otherwise, it would be far too powerful.

Unless you're playing a single-server deck, find a better drip econ card, like PAD Campaign or Rashida. If you want advancements, play Tennin or run Cayambe Grid. This fits best in one-remote glacier decks, especially with its bounce ability allowing you to return it before you draw and then slapping down something else.

The thing is, discounting the influence outside of Weyland, this card just a completely superior version of CSR Campaign and an often better PAD Campaign in the same card when it fires ONE of the abilities. It's pretty good even if it's not your only asset.