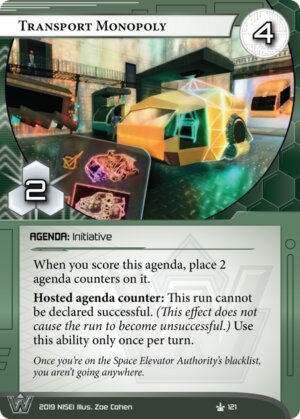 When you score this agenda, place 2 agenda counters on it.

Hosted agenda counter: This run cannot be declared successful. (This effect does not cause the run to become unsuccessful.) Use this ability only once per turn.

Once you're on the Space Elevator Authority's blacklist, you aren't going anywhere.
Illustrated by Zoe Cohen
Decklists with this card

It's more flexible than Crisium Grid and protects all servers against a variety of threats. Problem: it's a low-impact card in many matchups, and there are so many 4/2s and 5/3s you could have played instead. Offshore Office -- by no means a top-tier agenda -- is 7 credits upfront. How long will it take your Transport Monopoly to produce 7 credits worth of value?

For reference, as of ban list 21.06, here are the most commonly used cards in standard which check if a run is successful:

I've said this before, but I'm not the best at Netrunner. Now that that's out of the way...

Transport Monopoly honestly feels like a weaker version of Crisium Grid for two major reasons. First, it's an Agenda. Whereas Crisium would set the runner back 5 to dispose of it, the second they see it, they take it out of your hand and place it in their score area (unless they're running Film Critic as their restricted card). Furthermore, you can't spend influence to splash it elsewhere. Second, it has counters attached to it. Sure, Mark Yale lets you reap benefits from it, but unless you're placing it in Titan, it's a blank agenda after its second use.

That isn't to say this is a bad agenda; I just wanted to point out the glaring weaknesses before explaining why this agenda is good. Sure, it's not a hard end the run like Nisei MK II or Border Control. However, it does block some annoying card effects for the Corp. Khusyuk? Guess what, you're looking at the top card only. Dirty Laundry? Nope, you just wasted two credits for a run. The Maker's Eye becomes much weaker with one of these scored, and you can forget about fetching your killer lady with a Retrieval Run. Furthermore, this can be used in conjunction with Crisium Grid. You put a Crisium in the wrong server and the Runner's about to get those needed 9 credits from Hot Pursuit? Nope! Shut down with the Monopoly! And this Monopoly won't end friendships! Probably.

Final thoughts: Although a bit weaker than Crisium Grid, Transport Monopoly can be quite useful in a Weyland deck. It shuts down Runner cards that rely on successful runs, and can be fired on any server. Furthermore, although it's a once-per-turn ability, you can act like a classic thousand-cuts Jinteki and fire three off in a turn provided I'm not misreading that. If you need an extra two or four points in a Titan deck, this should benefit you greatly.

Great points. The only Weyland I'd be sure to run this in is Earth Station. Otherwise it's got tough competition from other green agendas.

I mostly agree with your assessment. I think what sets this apart from Crisium is that 1: it can't be turned off, except by Turntable. If the runner is rich, they can go into the server, trash your Crisium, and then go ham. This will always work against that. 2: this is essentially two Crisiums in one. But as you stated,as an agenda, this needs to be scored first, making it quite a but weaker. And it is a 4/2 on top of that,in a faction that struggles with 4/2's. So yeah, good but not great

Another special mention is how good this is at hosing Apocalypse. You can use it during their third run, meaning that they will always have to pay through all your ice. Crisum has to go on a specific server, so the runner can just run there first and trash it, and Apocalypse on the next turn, which costs them less.

You know, I keep forgetting Apocalypse is a thing...