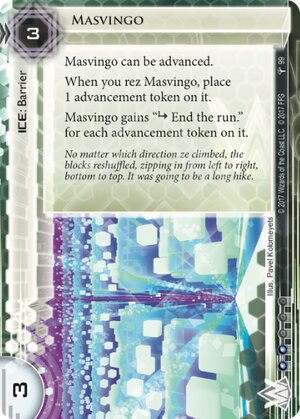 Masvingo can be advanced.

When you rez Masvingo, place 1 advancement token on it.

Masvingo gains "subroutine End the run." for each advancement token on it.

No matter which direction ze climbed, the blocks reshuffled, zipping in from left to right, bottom to top. It was going to be a long hike.
Illustrated by Pavel Kolomeyets
Decklists with this card

Random trivia: Masvingo is the only Netrunner card to date that uses neopronouns in its flavour text.

Masvingo joins the long history of advanceable Weyland ice that gets better the more advancement counters you pile onto it. Alone, with 3 strength and 1 ETR subroutine, it sits neatly between Ice Wall and Fire Wall as an afforable gearcheck that typically taxes more than 1 - exactly like Wall of Static. It is particularly taxing for a handful of breakers that boost awkwardly or break multiple subroutines at once, such as Demara and GS Sherman M3.

Unlike its predecessors, Mavingo gains additional ETR subroutines with advacement counters rather than gaining strength. Against the gold standard Corroder this is essentially equivalent, but for other breakers this is mixed news. Paperclip only starts paying more than 2 with at least 3 advancement counters, whereas the aforementioned Sherman will pay 4 for both 1 and 20 advancement counters. On the bright side, you can lock out Quetzal with a second counter, Boomerang with a third, and Spike with a fourth. Against the ever-popular Aumakua whether you prefer gaining strength versus subroutines depends on whether you want to lock the runner out or tax hir.

Masvingo hasn't really seen a great deal of love outside of Builder of Nations - where it shines from turning on your ID by having its first counter free - but with the newly released Akhet and Wall to Wall breathing new life into advanceable ice by charging them efficiently, we might be seeing it more often. I think all but the fastest Weyland decks will prefer Masvingo to Ice Wall because those counters start mattering sooner against most fracters (Corroder and Gauss). As for Fire Wall, I think these days if you're paying more than 4 for your ice it should probably come with a facecheck penalty and prevent Turning Wheel counter farming. Masvingo compares favourably to the old competition, and is probably your go-to dump for excess advancement counters.