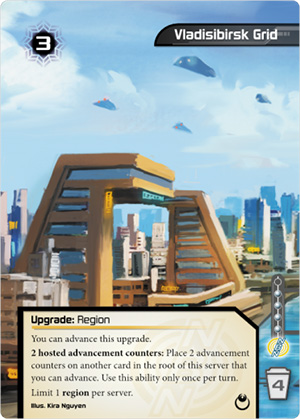 You can advance this upgrade.

Sound really inefficient, but at least you can score an agenda without any ices on remote server.

Except for Light the Fire!... also Because I Can... and also also our old friend SimulClot...

If you're trying to score 3/2s out of hand, SanSan City Grid is a lot more economically efficient. Vlad Grid makes it somewhat safer to score 4/2s out of hand, but the added install click and rez cost feels unwieldy for what it offers. 2 counters invested is a major commitment and most runners will trash it there. If you're looking for an advanceable semi-trap to bait runs, I guess it's okay. With NGO Front, you hope they check, with Vlad Grid, you're probably hoping they don't. Problem: against NBN they usually do.

I don't anticipate a lot of use for this card for fast-advance while SanSan is available; if your gameplan calls for scoring cards out of hand, 3/2s are much more reliable than 4/2s. With SanSan, you can score a 3/2 every turn. With Vlad City, you can score a 4/2 every two turns. You have to love your 4/2 effects for that to be worth building around. You also have to be SO tight on influence that the cheaper/safer Seamless Launch doesn't work.

If you have enough influence for Dedication Ceremony, but not for Reconstruction Contract, this might be a viable ReCo alternative for NBN players who care more about influence or reusability than efficency. Suppose you end a turn with a Vlad City Grid lurking on the board. Next turn, you could use Dedication Ceremony and score a 3/2. This leaves your Vlad City with one token on it, which allows you to threaten another 3/2 next turn. (Install agenda, advance the agenda, place a second token on Vlad City, and then move 2 tokens from Vlad City).

The building on the card image is a real place in the city of Novosibirsk. It is called "academpark". https://gelio.livejournal.com/254967.html: the 4th and the 5th photos here.

@GeneralGDA the heating bills on that building must be insane. I will help Light a Fire.

I had an opportunity to work for several companies in the building. The view from the top is spectacular. And yes, there is a glass floor in the "bridge" between building parts.

Fun and powerful card in NBN. Basically, it allow you to bait a run. If the runner take the bait, and after passing throught whatever ices you've put in place, the runner must then pay a whopping 4 to trash it (barring the use of Imp or other trash support). And if the runner does not run it, you can score a 2/3 or 2/4 next turn, from hand. That is a good value.

This upgrade is worth to have in multiple archetype. It can be used to fast advance anything. This can be an agenda, or Clearinghouse or Ronin to flatline the runner. But at 4 influences, it will be seldom splashed outside of faction.

Because this card exist alonside Drago Ivanov, any advanced card in NBN should be checked, unless the runner takes the risk of a nasty surprise.

Finally, the card has a great art and a nice tourist quote. Well made!