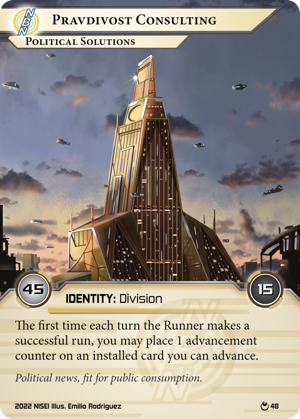 The first time each turn the Runner makes a successful run, you may place 1 advancement counter on an installed card you can advance.

If Okorina taught me anything, it's that Puppet Master is one of the coolest agendas in the game. Being able to have this ability right out of the gate led me down a rabbit hole of otherwise non-viable cards, cool deckbuilding and new win conditions. And now, we can do these kinds of shenanigans in Standard. Well, sort of. Puppet Master was not limited to once a turn, while Pravdivost is. But ofcourse, not having to score a 5/3 agenda is a big upside.

So how do we play this unusual ID? I think there are 3 options:

Boring, but a free advancement counter is still a free advancement counter. Build a monstrous remote (with some nasty defensive upgrades?), let the runner fish for points on centrals and they will advance your agendas/NGO/Vladisibirsk City Grid for you? There is also Ubiquitous Vig to keep charging. I don't know if this is really viable, but I am sure someone will make a list work. Maybe Embolus could help with this strategy?

Advancement counters can go on ice, advanceable ice can get pretty good. Tennin Institute showed that this CAN work outside of Weyland, you just need a good way to not waste precious clicks on advancing ice yourself. Pravdivost is probably better than Tennin too, since outside of the few install-runner turns at the start of the game, runners do want to run and pressure (nearly) every turn. But just like Tennin, most worthwhile advanceable ice will have to be imported. And with ice like Akhet or Mausolus costing 2/3 influence a pop, this will quickly become... untenable. Still, NBN already has some pretty amazing ice, and maybe an ice suite with yellow staples, Weyland ice and Vasilisa + Mestnichestvo for support, could work?

Master of Puppets, aka the Trap Strat

NOW we're talking. We have some truly nasty traps that care about the number of advancements on them. And since the run is declared succesfull right before the access, you can give the runner extra net damage, core damage or tags. Furthermore, you can also play mind games by including cards the runner WANTS to access before they get too many counters. I have gone on record as really disliking False Flag, but in this ID I could see it actually working? There are also the newly spoiled Drago, Reversed Accounts, Ronin and Gene Splicer. Will this be a super competitive deck? I seriously doubt it. Falsified Credentials is a card, and historically trap decks have never been a super strong force in the game. But I'll be damned if I am not gonna try to make this work.

"Advancement counters can go on ice, advanceable ice can get pretty good. Tennin Institute showed that this CAN work outside of Weyland, you just need a good way to not waste precious clicks on advancing ice yourself." I don't think Tennin can function without Mass Commercialization.

This feels like an identity that could get some serious use out of Clearinghouse. It's even (slightly) cheaper to import than Ronin!

Is there a cheaper way to do 3 net damage than a naked unadvanced Urtica Cipher put down, and then advanced thanks to this ID in the tiny "successful run conditional trigger" step RIGHT before access.