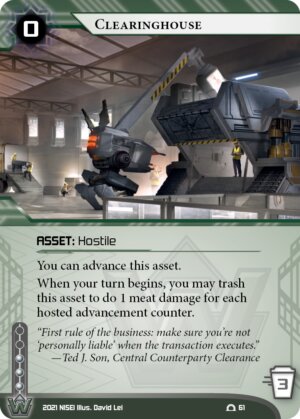 When your turn begins, you may trash this asset to do 1 meat damage for each hosted advancement counter.

"First rule of the business: make sure you're not 'personally liable' when the transaction executes."
—Ted J. Son, Central Counterparty Clearance
Illustrated by David Lei
Decklists with this card

This card is interesting, especially in the startup format.

Because in theory it represents an alternative win condition - Start the turn with 6 advancement tokens on this bad boy, and you've almost certainly won the game. You might not even need all 6, depending on the runner's grip size!

In practice, of course, it's not quite that easy. Getting 6 advancement counters on a card takes a significant investment of time and resources. That's at least 7 + 6 worth of effort. More than two turns! And during that time, the runner is going to be gleefully looting HQ and R&D, and very likely the Clearinghouse itself once you start to advance it. Or at the very least, building up enough cash to go catch it.

So trying to get a game-ending 6-point kill with this card is probably a trap, and should be reserved only for decks that go into it knowing that they are planning some serious jank. We'll talk more about that later. But that doesn't mean the card is bad!

But even in regular Weyland, it is probably an okay card. Weyland is good at advancing cards cheaply or automatically. It costs the runner 3 to trash, so if you throw it behind some ice that is even moderately taxing, the runner will probably feel like they need to go check it out, and take an econ hit. And if the runner happens to end their turn low on cards, maybe you get a lucky snipe!

In Jinteki, (particularly 1000-cuts Jinteki) I think it has some serious promise. It's got a lot of overlap with Ronin, but is generally more efficient. Also, runners are more likely to end their turns with less-than-full grips, so you might get a kill even if you only have 2-3 counters if you're lucky. And possibly most importantly, when dealing with Jinteki damage decks, runners are a bit more cautious about running on a facedown card with advancement tokens, so you might be able to slap Clearinghouse down on a La Costa Grid, and let it build up, while the runner fears an Urtica Cipher or Cerebral Overwriter. Trick of Light some counters off of it early to fast-advance something, and the runner will be SURE it s a trap.

Anyway, now that that's out of the way, let's talk about jank.

There are a few ways I can think of, to live the dream of getting a kill shot from this card.

You could just treat it as an agenda - drop it in a scoring server unadvanced, and maybe advance it once or twice. Second turn, if you think they can't get in, drop some Seamless Launch love on it or something, and hope for the best. But that's probably boring.

The best I've come up with (and by that I mean, probably the least likely to actually work in a real game) is to bring our old janky friend Jemison Astronautics into the picture. Because if you can sacrifice agendas on the runner's turn, you can quickly load up the Clearinghouse before they can react. There are a couple of effects that let you reliably forfeit agendas on the runner's turn, after they've taken their last action - rezzing Oberth Protocol, Quarantine System, or Corporate Town for example.

But the cleanest way is probably just to score out two False Leads, and then the next time you draw a Clearinghouse, you can just install-advance-advance, and then sacrifice both false leads to obliterate the runner's turn, while also adding four more advancement tokens for a grand total of six. And then boom.

I did indeed. Fixed, and thanks!

Or to ballsy by rezzing it, double Dedication Ceremony and waiting for the runner to react.