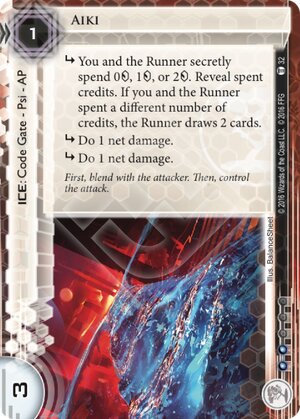 First, blend with the attacker. Then, control the attack.
Illustrated by BalanceSheet
Decklists with this card

This piece of ICE can seem like no big deal to a first observation.

A code gate with three strength? Any key can open that right? A psi-game to make the runner draw? Giving him options and possible valuable card draw? This ICE can be used as click compression by a savvy runner: an access and two cards? Please! And yes it inflicts two damages but that's no more than what the runner can draw. The damage is negligible.

However, understanding that ICE as something powerful that can stop upfront the career of an unprepared runner is a nonsense. That card is there for the long run, the very long run, and it starts having teeth really early in the game. Let's dive in.

First thing first: this card is insanely powerful in the early game. With a rez cost of 1, a runner might well think the corp is too broke to rez that on thin layer of protection in front of their HQ. Too bad for them Aiki is here, if they want to draw, they have to pay 1 credit, otherwise they will simply lose two cards. Moreover, cards in a runner's grip early in the game are the most valuable. Even if their hand size is not changed by going through Aiki, if they lose one of their icebreaker early, they can then have to lose a lot of time digging for the next one. And did I underlined that Aiki is a Code Gate and those pesky runners thinking hiding behind a mask can protect them will get really bad surprises?

So okay, Aiki can be a setback early but what about later on?

That Ice remains a code gate with strength 3 and 2 subroutines that need to be deactivated. That is one ghost credit and two true ones with a Refractor, 2 credits and one token with a Cerberus "Rex" H2 or 3 credits with a Gordian Blade. Considering this card cost you 1 credit and can be up and running turn one... prices add up and the swing get real really fast. The runner can also use the psi game to draw... but that can be to your advantage: in late game when their hand is full, more draw is not always good for them, so they will bet 0 which can mean: either they don't use the "disadvantage" of this card, or if they run last clic or with only one clic left, you can pay 1, let them draw and have to discard precious cards they won't be using against you.

So Aiki can be quite taxing and be a really good deal for the corp. Now question is, can Aiki get even better?

An obvious synergy Aiki have is with Pālanā Foods: Sustainable Growth: dealing damage and forcing the runner to draw which bring credits. But that is limiting your thinking. Aiki does wonder in front of a Harvester (let them draw 5 cards and discard to their hand size) a Komainu (who cares how many cards they have in hand?) or a Psychic Field. All those cards turn the "disadvantage" of Aiki into a strength.

However, the stronger synergy I have experimented with is with the yet un-released Jinteki: Potential Unleashed. That ICE becomes nuts with that ID. As PU, your goal is not to deplete the hand of the runner, but his deck. Experiencing on jinteki.net it is not rare to destroy and entire deck that include a Levy AR Lab Access in a few turns and Aiki contributes a lot to that. With PU, Aiki let the runner lose 4 cards of his card pool while diminishing his stack by 4 cards. Things can go really fast if the runner uses the psi game to draw too much, and if he is not, that card is still a 1 to rez, 3 strength, 2 subs ICE. What else do you need?

(Blood Money era)
InquisiteurArax 25
Per usual Yog is the bane of this ice, but for 1cr, can you really complain? Also plays well with Sandburg, moving it out of easy Yog range - and who's going to D4v1d it? — ninjaiguana 30 Aug 2016
Another synergy worth some thought is Chronos Protocol; even if they pass the psi, it just means you've got more cards to pick from. — Jashay 8 Sep 2016
4

This is a card where you need to pay close attention to the psi game text:

"If you and the runner spent a different number of credits, the runner draws two cards"

Unusually, possibly uniquely, the corp wants to tie this. I leave the betting strategy as an exercise for the reader.

Kind of a perplexing card at first, but a good one. You just need to look at the damage as utility rather than kill potential. For the dirt cheap price of 1, its 3 strength and 2 effective subroutines are pretty amazing, costing 3 to break with Gordian Blade for example. The other, more esoteric "draw 2" subroutine seems made for preemptive card sniping, but most of the time both players just spend 0 and it doesn't do anything. However, its presence does give the runner an out against surprise flatline, limiting the kinds of decks you'd want to use Aiki in. It is possible for the runner to exploit Aiki as a draw engine if it's on the outside, though it's not really any more common than it was for Little Engine, and you're not wasting much if you just install over it.

Aiki shines the most in Chronos Protocol: Selective Mind-mapping and Jinteki: Potential Unleashed, where the damage carries extra penalties and people are less willing to eat it. It wouldn't be bad in Nisei Division: The Next Generation either, making the runner either pay to break the extra subroutine or give you 1. Other than that, I'm not sure how much it'll get played, but the price is certainly right. It'll get even better if they keep printing mill cards, or if Yog.0 ever goes away.

Aiki creates excellent long-term value. Currently 80% of tournament runners use decoders that cost 3-4 to break the two net damage subroutines, and a 3-4 credit swing is spectacular for a 1-cost ice.