While the Runner is accessing this card from R&D, they must reveal it.

When the Runner accesses this card, you may trash it to force the Runner to encounter a rezzed piece of ice protecting this server. 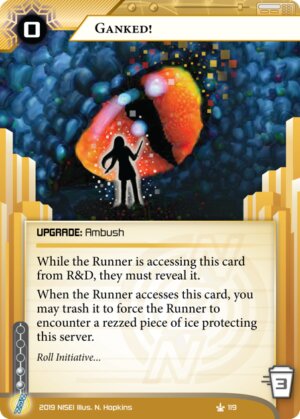 Týr, Tithonium, Anansi, Thoth... The list of powerful, expensive, and painful to facecheck ice goes on. Each corp has access to at least a few, while a couple of them just can't get enough of the things. So what's the caveat with ice like this? Well, as mentioned above, the stuff can be expensive; even worse, it might be unique. And while that's all understandable for "balance reasons" or whatever, who wouldn't love to have the money and ability to put two Týrs in the same remote server?

Well, Ganked! doesn't completely solve that problem, but it sure helps. You know what's almost as good as two Týrs on the same remote server? Making the runner hit that single Týr a second time after they touch the Ganked! they thought was a Project Vitruvius. Or having Ganked! in there with an actual Project Vitruvius, and laughing to yourself as they trade an agenda score for 2 brain damage, you getting to wreck an integral piece of their board state, and three credits. Depending on how much they paid to get into your server in the first place, that's the kind of tempo loss that'll seal a game.

Doesn't have to involve your remote, either. Give them a second dose of the DNA Tracker that's protecting R&D during a deep dig, or slam into multiple Afshars when they Legwork. Make the Sneakdoor Beta run that they thought would be ice free Not So. Make them encounter Komainu a second time, with twice as many subs (I smell net deeeeeath~). Combining it with Konjin allows you to force the runner to encounter a piece of ice in a different server twice, all in the same painful run. There's so many possibilities, almost as many as there are ice, unsurprisingly enough.

So at only two influence and with no actual credit cost (Outside of the cost of rezzing ice you were going to rez anyway, right?), keep this little ambush in mind for your next glacier deck. Depending on your ice spread, this thing could be nasty. Of course, getting Ganked! often is.

This card is too strong. Every other card that does something similar has huge requirements / drawbacks and this doesn't even need to be installed...

Sure but a vast majority of times, it only fires after your agenda has been stolen - assuming the big ice haven't already stopped the Runner from getting inside in the first place. Compared to Code Replicator which fires on the Corp's discretion but allows for a jack out.