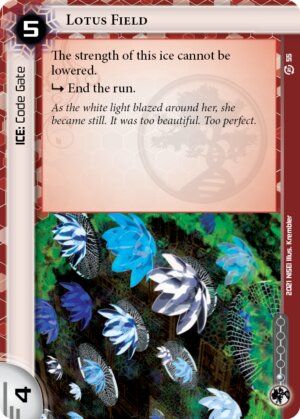 The strength of this ice cannot be lowered.

As the white light blazed around her, she became still. It was too beautiful. Too perfect.
Illustrated by Krembler
Decklists with this card

It's an interesting time for Lotus Field. Once the best ice for improving a deck's match-up against anarchs in general and Yog.0 specifically, there are now a couple of solid solutions to it. Net-Ready Eyes will get your Yog up to the correct strength, but unlike its cousin The Personal Touch will also support other breakers, elevating it above 'silver bullet' status. It also has the advantage that it's not hosted. In faction, Faust breaks Lotus Field for a couple of cards - a totally reasonable cost for a runner with a bit of redundancy in their deck, like the WyldCakes combo for instance.

Given the existence of these new tools, is Lotus field still a good card? I'd say yes. Both of the solutions mentioned above require installing another card to be able to get in. An extra gear check is still a valuable effect, even if the gear has improved. Immunity to Parasite is also a giant upside that shouldn't be underestimated. Its numbers look very similar to Bastion, a mediocre but playable ice. It costs an extra , but then its a code gate, so it will often cost more to break (If you compare breakers with similar costs, like ZU.13 Key Master to Corroder or Gordian Blade to Cerberus "Lady" H1).

Lastly, at a low, low cost of one influence Lotus Field is an easy splash. This is especially important for Weyland, who infamously lack decent in-faction code gates. It's cost makes it the middle of the road option between neutral codegates like Enigma and monsters like Tollbooth. Crucially, it demands the installation of a breaker (Enigma and its cousins are parasite fodder). Blue Sun: Powering the Future particularly likes it, because Wormhole is worthless when you don't have any other ice rezzed.

In conclusion, I think Lotus Field will continue to be a big deal in most metas. It's a good thing that anarchs won't have to swear quite as much when they see it, but it was strong enough in the first place that it's still a solid choice, despite having been weakened.

The role of Lotus Field has changed with the release of Şifr as the combo with Parasite to Trash ICE immediately is not working anymore and as long as Anrach remains the dominating faction.
It's resilient and currently the cutlery (Forked, Knifed & Spooned) is falling out of favor as you can do the same with Parasite (& recursion). It's imported into all other faction as an ICE that can't be destroyed so easy and it's out of D4v1d range, but weak against Faust (2 cards). With Black Orchestra it's 3 creds to break to much to do that repeatedly as the current Anarchs try to do when hammering R&D. And Yog.0 needs support cards such as The Personal Touch or Net-Ready Eyes which are currently rarely seen.
But it will rotated somewhere in the second half of 2017. It teams well together with Magnet and Architect the only 2 other ICE that are kind of immune to the ParaSifr combo and as long as it's played Lotus Field will remain an important card.

(Daedalus Complex era)
5N00P1 665
Spoilers from upcoming packs: There is a spoiled barrier coming out in Station One that cannot have it's strength lowered as well (Self-Adapting Code Wall) — Oooer 27 Feb 2017
@Oooer I don't think you can really compare it to Louts Field... It's rez/str ratio is even worse and it has only 1 str, so it can't be lowered, but it is always low. Inti breaks it for 1. Lotus Field is a problem for Yog.0, which is important to keep this powerful breaker in check. Nobody really uses fixed strength fracters (Mornig Star, Nfr) and even if someone did, 1 str is never a problem for any breaker. A ParaSifr deck is not prepared to pay through a taxing ICE again and again. Lotus Field forces it to do that. A Str 1 barrier simply taxes 1c, so it's even cheaper NOT to parasite it. — Krams 27 Feb 2017
Lotus field is in the Lunar cycle so it's not going to cycle for a while - it's Genesis and Spin that are for the chop — DGB123 7 May 2017
2

A strong code gate with a unique and powerful ability. With 4 strength and no way to lower it, Anarchs (or anyone, really ) running Yog.0 cannot ever get past this. No Parasite or Wyrm can touch these pristine petals, and it can't be rudely cut by an Ice Carver.

However, it is expensive and only has one subroutine to end the run. If you need a strong defensive code gate and don't want to shell out for Tollbooth, at one influence you could do worse than this. Have one ready against Anarchs and let peace of mind flow.