PICTURED: The corp trying to do anything through a three server lock.

Gather round fellow Netrunners and let me tell you the tale of what I consider to be the most potent Shaper deck since Prepaid Kate. However, I think since corps are weaker now than they were then, this deck is effectively stronger than Prepaid Kate.

This deck was part of a tie for first at a GNK that on SoS gave me third, it is also 36 and 7 (83%) on Jnet in this current iteration. Previous versions from Nov and Dec were in that same mid 80s area.

Nothing about this deck would be possible without our pawnbroker Aesop and a little help from our fans. 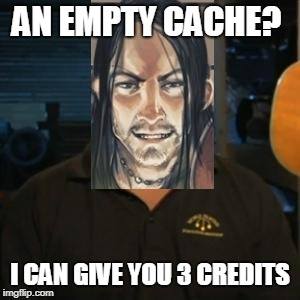 I have Diesel as well as Professional Contacts in this deck because sometimes you need burst draw against RP, Obokata, and Argus to be able to have enough cards to win. Also, you need to run three times to install Crowdfunding from the trash. So it is handy to have a one click card that can overdraw so you can pitch and install them after making your runs.

I waffled between "Freedom Through Equality" and Interdiction as my single current but decided that with the agenda suites common right now, Interdiction was more game changing. I can catch out NGOs, Marcus Batty and ASH. Avoiding Batty especially is important to giving the corp no luck based outs against your lock. It is also good against Mwanza grid.

Modded is a card I have been waiting to use gain. The return of R&D Interface and the Shaper lock makes Modded a strong choice. Due to this, other cards that utilize modded go from being B cards to A cards. This includes Cyberdelia, The Gauntlet, Feedback Filter, and it also makes out late program installs less expensive.

Sure Gamble 10/10 would cheat at cards again.

Clone Chip is exceptional in any Aesops based deck but it really shines in Hayley. The ability to recover lost breakers allows you to facecheck early, putting more pressure on the corp. The ability to pull unseen cards from hand by installing a Cache or Kyuban from the heap is the reason to play Hayley. Come for the click compression, stay for the game winning surprises.

The inclusion of a Cyberdelia is because we are exceptionally MU hungry. Also, this deck is all about making the runs on RD and the remote as efficient and cheap as possible. Delia works into this plan well, especially when paired with Takobi. The combo of these two cards will often lead to Corps overwriting Thimblerigs, Ice Walls, and Vanillas when they realize I can farm them for profit and ICE breaking power.

Feedback Filter is here because too many people are playing attrition based Jinteki decks and I have Modded anyway. Against those decks this card outright wins you the game, and we draw our whole deck so we always see it.

My favorite piece of Shaper multi-access has returned. R&D Interface is ready to party and it is good for what ails big rig shaper. Previously, we relied on The Maker's Eye and Indexing which often come up dry. Due to this, big rig shaper didn't get good returns on its efficiency because The Turning Wheel is slow and you could always wiff on your events. R&D Interface gives you a hard lock of permanent accesses and when paired with Crowdfunding gives you a strong incentive to run 3x a turn. It also makes Psych Mike a reliable, playable card.

Running through iced servers three times is a talent of this deck not shared by other runners. We have the tools to be the most efficient non-stealth runner and the cards that best reward us for doing so.

The Gauntlet is probably the most contentious choice I made in this deck. A lot of people find my love of this card charming and quaint because they doubt it's game winning power. The ability to have an HQ interface or a Legwork that is permanent would be strong on its own, but it also provides two MU.

"but what if they don't rez HQ ice?" you ask, well then we will probably win because we have free runs to HQ to reinstall Crowdfunding and get accesses. Gauntlet is a great fork card that has won me many a game.

Aesop's Pawnshop is a fucking incredible card and continues to be my favorite Shaper econ. It is the key element of this deck. In addition to the normal tricks of pawning Cache and the last tick of Daily Casts you can pawn Crowdfunding over and over for a source of permanent economy in these trying times.

After every Crowdfunding triple install you can pawn them for a drip of 6, then 5, then 4 credits for no install cost.

Beth Kilrain-Chang is a good card when you are not doing any cred denial. It helps you catch up since you have setup and tempo hits along the way.

Crowdfunding is a card that promotes running, checking servers, getting central accesses and provides stable economy like Temüjin Contract without the game breaking burst. It is a well designed card that costs a lot of influence and makes you pay for your power with runs.

Daily Casts is a money card that is click efficient and you can pawn the last hit of it for additional funds. Live your best drip life.

You draw a lot in the hopes of overdrawing into Crowdfunding so Professional Contacts is an obvious choice. You are big rig, you have pieces to draw and you might as well make money while doing so.

Psych Mike makes holding the RD lock easier by returning 4 credits at the end of the first run each turn. It may seem like a lot of the cards are win more cards. however, when you add them up they make the runs cheap enough to reliably run three times a turn.

Corroder is efficient both in breaking and in influence. It also pairs well with Takobi.

Engolo is the most efficient decoder we have and makes our runs efficient. Boosting 4 for 2c makes Takobi even better.

Na'Not'K Is the weakest link in our breaker suite. That is why the secret sauce of this deck is Takobi. It enables us to boost this breaker without using its printed cost.

2x Cache is for money, Hayley triggers, and pawn bucks.

Kyuban is a solid choice for RD. Again, reducing the real cost of maintaining the RD lock. It also gives you a use for Clone Chip that you didn't have to use while setting up the lock. It can also be good early on the one ice they put on archives or HQ for your Crowdfunding runs.

Misdirection is for the devotees of Weyland and NBN. This means with pawnshop and drips, tags never stick. It is also a card to piggy back and pawn in other matchups.

Self-modifying Code is the reason to play Shaper. The ultimate anti-rush and lock tech card in netrunner.

Takobi is so good in this deck it cannot be understated. In almost all my matchups, the first time people see it they chuckle. As the game goes on, however, this dread sets in as they realize how powerful it is and how much it reduces the taxing value of their ice. In many games, my opponents reluctantly agree that Takobi and not understanding what ICE they should rez cost them the game.

Take it for a spin, it is the best.