Jesminder Can't Juggle: 5th out of 34th at Early Bird 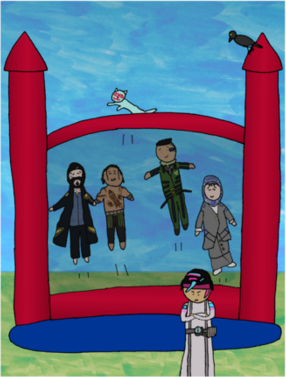 Jesminder might be feeling disrespected that she can't enter the Funhouse, but don't let that distract you from all the amazing things she's gained from Gateway:

These things all are real boons to Jesminder, and I'm excited to see what is possible for her.

Me going 2-1 with my runner and placing modestly well at an event is not proof that Jesminder is the top shaper in the game. Of course. Far from it. But it is proof that if you are excited to play some Jesminder, you shouldn't let Funhouse scare you off it. Two Hunting Grounds is more than enough to keep you safe from the scary fear of being totally locked out by nested costs you can't pay.

There's a lot of unsolved stuff for Jesminder deckbuilding. Are these breakers right? As nice as Pennyshaver is, is that the right influence expenditure? What's the best decoder here? Can we get away with not having Paperclip?

I don't know! But the future is bright, and no matter how many setbacks you throw at Jesminder, you can't stop the Girl Behind the Curtain.

Unless, of course, you ask her to juggle.