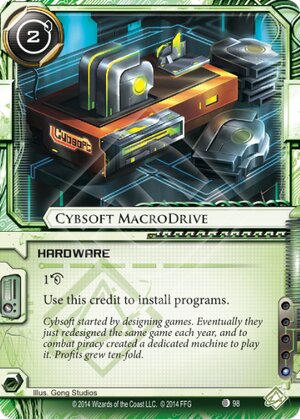 Use this credit to install programs.

Cybsoft started by designing games. Eventually they just redesigned the same game each year, and to combat piracy created a dedicated machine to play it. Profits grew ten-fold.
Illustrated by Gong Studios
Decklists with this card

Prepaid VoicePAD costs 2 to install and gives 1 recurring credit for Events; Cybsoft's product does much the same for the same cost, but for Programs. If PPVP is good, CMD may be as well, right? Perhaps not so much: PPVP empowers events that don't normally persist so you're often playing more of them. Programs in general aren't being installed every turn, so you'll theoretically see less use out of that recurring credit.

• Unlike Sahasrara, this hardware consumes no MU.

• Unlike Ice Analyzer, the recurring credit isn't conditional on the Corp doing something.

• Unlike Cyberfeeder, the credit isn't dedicated to installing virus Programs.

• The MacroDrive does "force multiply" and as Hardware can be Replicatored.

• Where PPVP gives you credits for Events that, among other things, can make money, few Programs boost your economy.

• Unlike Net Celebrity (which doesn't stack, though) you can't use the credit to power Icebreakers (ditto Cyberfeeder).

• Hardware, barring Trade-In, isn't searchable and if you are going to tutor for Hardware it will likely be something more game changing than this.

• Nasir Meidan might like recurring credits hosted on cards that don't vanish in the face of a Pop-up Window.

Oh wait what this exists?

Sahasrara is the closest comparison. It costs you 1 at the benefit of being twice as good as MacroDrive. Generally, cards with higher power level are more popular if they don't cost too much. In this case, Rara is stronger and has the same install cost. Therefore, you'd only choose MacroDrive if:

3 uses breaks even. You'd have to use this about 6 times to make it better than Easy Mark. With that in mind, there's a few combos this fits with nicely:

There's also a few decks I wouldn't include MacroDrive in, despite possible synergy:

MacroDrive, like many recurring credit cards, is slightly overcosted, which makes it hard to use. It definitely requires a very specific build to make it good enough. The only reason Prepaid VoicePAD was considered strong was because it was combined with Kate's discount to only cost 1, AND it allowed you to play econ cards for cheap. This is similar, where outside of Kate it will be tricky to make this viable.

This card could be what the Cloud Breaking & Entering Breakers (Spike, Crowbar, Shiv) need to be even more economical. Will also help with support programs such as Crescentus and Sneakdoor Beta in faction.

(Chrome City era)
hi_impact 1713
I'd like to note that this could be a cute little support card for Chameleon once its out, whether used in Kate (with 1 CMD) or Hayley (additional install), if you desired that sort of rig. :) — LynxMegaCorp 17 Jun 2015