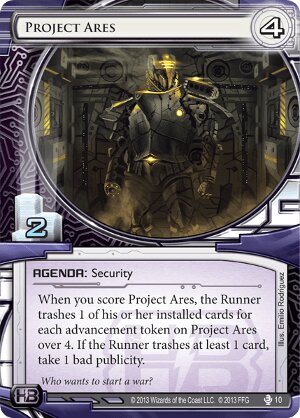 Who wants to start a war?
Illustrated by Emilio Rodriguez
Decklists with this card

Project Ares is usually quite bad. As tiedyedvortex explains, a blank 4/2 is absolutely terrible given lots of other options, a 5/2 with 1 trash effect is still very bad, and Mandatory Upgrades is better as a 6/2. It starts becoming playable if you expect to take it up to at least 8, though.

Generally that means traps and Mandatory Upgrades in the deck as well. HB has two great advanceable ambushes in faction, and can easily import a third if it wants. The key is that these agendas are worth a mere 2 points when stolen, but when scored for ridiculous values they have a massive impact on the board state. That asymmetry is the reason to play them. You can expand this by also including Project Vitruvius as another over-advance target. Your deck could easily include 9 overadvance agendas and 9 ambushes. Project Ares means that when you take it to 8 counters and pass the turn, they consider the possibility of losing the game from flatline, or losing their rig. And in a deck built on ambushes, the single bad publicity pales in comparison to wiping their rig. The real cost here is having the resources and patience to advance it that many times, and the deck's commitment to a particular style of play.

Compare it to Government Takeover and Vanity Project, where the gain from the steal is basically the same as the gain from the score. You're risking a lot more by putting them out there. Granted, Project Beale would be amazing if overadvanced to 11 (then worth a full 6 points), but its the only agenda available to the faction to overadvance, and it only has Ghost Branch as a native advanceable trap.

So, no, I don't think it's the worst agenda in the game. It's just very niche, with only a very specific deck type that can pull it off.

This is, in my opinion, the worst agenda in the game.

Firstly, it's a 4/2, in a faction with two 3/2s (Accelerated Beta Test and Project Vitruvius). If you aren't planning on over-scoring Ares, then it's a blank 4/2, which makes it strictly inferior to Project Vitruvius, or another in-faction 4/2, Efficiency Committee, which at least gives you 3 extra clicks.

So you would have to over-score it to make it worthwhile. It's not too difficult to overadvance it by one: you're effectively scoring a 5-advance agenda and getting one less point, which is justifiable if you are getting enough value.

But if you only over-score by one, then the result is simply "The runner trashes 1 of his or her installed cards and you take one bad publicity". That's a terrible deal. Consider this: one of the best runner cards in the game is Desperado, because it gives you a credit after every successful run. A bad publicity gives you a free credit before every run, whether or not it is successful, meaning that a bad publicity is more valuable than the best console in the game and the runner would gladly make that trade. Especially since you are never going to hit their Desperado--it's the runner's choice, so they're just going to trash a spare Clone Chip or Datasucker or Symmetrical Visage or something else they don't really need and can easily replace.

So scoring Project Ares as a 4/2 is bad, and scoring it as a 5/2 is actively worse. But, you only ever take one bad publicity: maybe it could be efficient if you go for 6 advancements?

But again, if you're going to try to score an agenda for 6 points, you could score a Mandatory Upgrades or a Vanity Project. Scoring a 4-point agenda, or getting an extra click every turn, is vastly superior to telling the runner to trash two cards and taking a bad publicity. So Ares is still bad with 6 credits.

Let's take it up to 11--eleven advancements, that is, give or take. If you can pull it off, you can utterly destroy the runner's entire rig. With no breakers and no economy, you are basically assured victory. This is the optimal play for this card, giving you the best return for that bad publicity.

But even at it's best, Ares falls short of other agendas. Any technique to score something with 9 points or more could be better applied to Government Takeover or Project Beale, likely winning you the game outright.

The fact is, this is simply not a good card. And I don't foresee that ever changing.

[Story time with H0tl1ne! After a brief hiatus, we're back in the saddle. As it shows, some habits prove really hard to kick.]

I can't help but notice how rapidly has the overall feeling of the game changed over the last five years.

Yes, Android always was a future cybernoir dystopia, although despite all the corporate struggle over human lives and minds, the societal struggle to push back the economy shift caused by the android revolution, the scheming and backstabbing, it still felt somewhat... marvelous to me. Yes, we're still a bunch of pricks that find it hard to live on the same planet together, but look, somehow we're in space now! And we've built the Beanstalk up to the sky, a dream shared with our most distant ancestors! Hell is other people, yes, but look at us, making new, synthetic people out of scrap metal and/or biomass! And they are sentient enough to ask what does it mean to have a soul! We've got flying cars! And holographic television! And geothermal ener... You know what, never mind that one. The point being, the future is dark, but it is also brilliant. And, to me, this sole notion was somehow light-hearted, optimistic even!

Now that I think of it, it's all caused by the first impression this game made on me. In the good old Core Set, you might have stolen some secrets, yes, but what secrets were those? Some corporate mumbo-jumbo about requisitioning things? Job openings for people good with guns? Buyout of some rival company? Or perhaps was that some beta testing schedule or the biggest ad banner to ever light up the sky? Underwhelming, isn't it? It's almost like those people were doing legitimate business instead of shady deals you assumed. Does your breaking and entering feel meaningful to you already? Black hat - more like dunce hat, eh?

(There was a Minority Report-based exception to the rule, but it only serves to prove me right. Corprations five years ago had next to no dirty secrets to begin with. And this... feels pretty crucial in a game revolving around stealing or protecting dirty secrets. Right?)

Take a look at this one. Bioroids are advertised (and thus commonly believed) to be completely harmless. They've got these sweet built-in directives that prohibit the machines from hurting a human being - or even allowing one to be hurt at all. Metal men are your biggest friends! They are programmed to love you! Wouldn't that be horrific if any single one of these ever had an ability to, out of the blue, change their mind and murder the crap out of you? Whew, good thing that's never come to pass!

"Who wants to start a war?" What war? That's pretty obvious - our new additions are called Ares, like the ancient greek god of war (not Kratos). With Project Ares you're not only giving your bioroids guns. You're doing something so much more meaningful - you're lifting their restrictions to kill. Contradicting your own status quo. Whatever the Runner has in their rig, you really gotta hate it to do something like this.

That war you're starting? It will be waged in the media. The sole idea of fiddling with the three directives is enough to cause people to panic, given how little love they already have for tin men taking their jobs. They will crap all over you if you don't do it gently - "we lifted his restrictions and he demolished a pawnshop, it was fun but let's never do it again ever pinky promise (until Aesop gets his arm back in the socket)" probably won't cut it either. I imagine this is why you have to advance this agenda four times: making bioroids kill stuff seems easy, it's preventing the outrage that could prove difficult. There always will be voices of dissent - that one bad publicity you get for turning Ares on the cybercriminals at the gate - but that's not much compared to what happens if somebody gets his hands on the unfinished project...

Because then, the public is going to know you're in your basement, cooking up an army of murderbots. Nobody is going to listen to you explaining this was done for the good of science (and bane of pawnshop owners to Heinlein and beyond). Good show, Runner. Two points for you and thanks for being such a badass hero of the far future. Now if you'll excuse me, I have to sharpen my pitchfork.

Again, who wants to start a war? Because you certainly don't. Get this Ares scandal under control and do it right now. Maybe if you spend enough time on this, we could get away with a shot or two before we lock it up, never speak of it again.

This might be a weak (or niche) piece, but damn me if it's not thrilling to put it on the table. With Project Ares, you really are doing the forbidden thing. "But the runner gets to pick what gets trashed and what not!" Yes, I know. That is the point. For example, do you remember that time in Darkest Dungeon when a certain eldritch abomination forced you to choose which one of your beloved heroes is going to die next?

It's all about this thrill, this pressure. When you get to pick the target, it's clear as day - poof, Gerbil lady gone, console gone, breakers gone. No drama. When they do... Do I trash this? Or that? Which part of my extremely valuable combo rig I could part with and still be able to do anything? Sometimes it's plain, like with a one-credit Bank Job kept purposefully for this occasion (or these stupid frickin' breakers that keep reinstalling over and over again until you puke)... But then, sometimes it is not. And this is when Project Ares turns out to be a really, really fun card.

(Sovereign Sight era)
H0tl1ne 414
Glad you're back! I think your flavor/fluff reviews are really fantastic, and help with the game's sense of immersion. — bashwell 26 Jan 2018
Thanks. Glad to know somebody cares about the flavor in the brave new post-rotation world! — H0tl1ne 27 Jan 2018
I just started playing Netrunner a few weeks ago, so your reviews are some of the first immersion I’m getting in the lore. Thanks again! — bashwell 28 Jan 2018
Nice reading from you = D Your reviews are still very cool. Thank you for doing them = ) — valerian32 28 Jan 2018
Also glad to see your writing again. Keep it up, please! — micahbales 30 Jan 2018
I love these; but I’d like to point out that Astroscript was the test program for advertising on the moon; not. a pilot show. — .wil 25 Feb 2018
Alright, that sounds a little more ominous. But it's just an another exception - the point still stands. Thanks for pointing that out. — H0tl1ne 26 Feb 2018