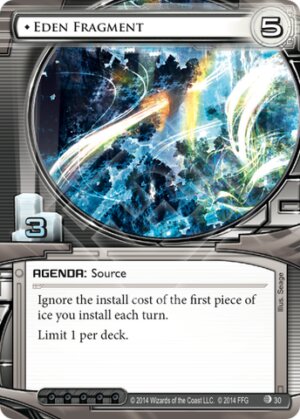 Ignore the install cost of the first piece of ice you install each turn.

A little piece of paradise with a high AP total. This card sees play for two reasons, its effect and its point value.

1) Utilizing its great effect to bury servers in ICE and make glacier decks much more economical. Since it is a neutral agenda, it doesn't matter what faction you want to make into an unbreachable sheet of ICE, this will help you drift into a favorable position. The effect is stronger the earlier in the game you score it, however, which is a major drawback with its 1 per deck rule. If you build a deck around this, absolutely bring Fast Track (or potentially Aggressive Negotiation)for consistency. If you pull this later in the deck, its effect is wasted. Which brings me to:

2) This is a 5/3 agenda, suitable for any deck that wants low agenda density. With the addition of Vanity Project, using the Fragments to fill neutral space might fall out of favor, but that still requires influence.

Consider this card if you are using Haas-Bioroid: Engineering the Future to keep earning the credits for installation instead of losing value as the game goes on. This is also strong for Jinteki: Replicating Perfection if you want to stack your centrals with horrors.

(The Universe of Tomorrow era)
Steamwood 302
It's also great in Blue Sun who likes to bounce and reinstall ice throughout the game. — Phoenix 3 Sep 2015
4

Eden Fragment is a useful 3/5 agenda for both Glacier and Rush decks. Rush decks will be able to push it out early behind two types of ETR Ice and Glacier decks can just put it in the scoring server like any other agenda.

In Glaciers it will save you significant economy when it comes to building up highly taxing servers. In Rush decks the cheap ice that is less taxing in the late game can be stacked extremely deep, using quantity to make up for lower quality.