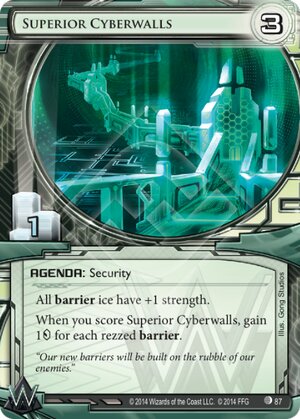 All barrier ice have +1 strength.

When you score Superior Cyberwalls, gain 1credit for each rezzed barrier.

"Our new barriers will be built on the rubble of our enemies".
Illustrated by Gong Studios
Decklists with this card

Note:
At the time of this review, Weyland has 11 of the 31 Barriers... Check here for updates not including Wendigo or anything you have Sub Boosted.

So with Weyland Consortium: Building a Better World having a rep as the Money faction via cards like Beanstalk Royalties, Paywall Implementation, and Caduceus and a reputation as the Barrier faction with cards like Ice Wall, Hadrian's Wall, or Spiderweb, of course this Agenda makes sense, right?

So, if you are new and look at this you might think, This is what Weyland should be doing! Except... no.
So why not?

1 Barriers are often feel weak. Yeah, that's why I want to give them a +1, right? Not exactly. Lets use the "fixed strength breakers to show why. Mimic means that making a Sentry Str 4 takes a Datasucker token, or similar methods, to break. Yog.0 is stronger than mimic, in the sense that breaking a subroutine is free, but still needs those tokens. Morning Star is more expensive to install, but even if Weyland has score three of this Agenda, Spider web costs 1 to get through.

2 Same idea but from the most efficient breakers you can find... Torch is expensive in influence and installation, but is only slightly less expensive than Corroder against ice with higher Str than 2. Garrote is still more costly than Corroder, but costs exactly the same to use. That means Corroder is going to be seen more -- simply put it's more efficient for runners to break a barrier.

3 But the money, I mean isn't that worth it? How many barriers do you want rezzed in a game? Unless you are playing a deep glacier, the kind where you want to use 5/3's of 9/6's, you don't want a lot of 3/1's laying around. If you are playing those big boys, then likely you have better agenda sources of money... like those same agendas. So you want 4 or 5 for a risky one pop that only works that well if you have waited at least to mid game, or do you want some serious bank? And if you are playing with smaller agendas, you aren't going to make your money back here. It's a red herring. And not one out of NBN.

4 OK so it's not as good as the Jinteki one... uh what was it called? Yeah Portals is junk too. That's why you don't see it either. But you are right It's better than this!

Now, the card isn't worthless. It's just that for all the agendas you can use there are currently 12 1-point agenda's you could be using, and simply put that means this one has to have something more than, "Eh, it's ok." to beat out Posted Bounty, Profiteering, and Gila Hands Arcology.