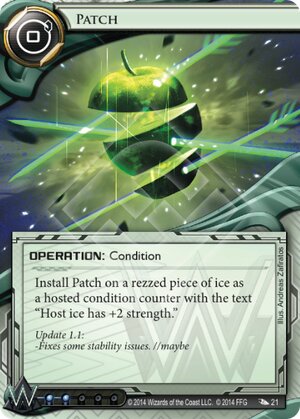 Install Patch on a rezzed piece of ice as a hosted condition counter with the text "Host ice has +2 strength."

I have a feeling this card will get lots of "meh", because of the influence and for it having to take up a card slot, but not from me. True, I suspect this will stay for the most part in Weyland, but what can you bring in? Splashing for Lotus Field just got that much sweeter. Being able to put Architect out of Mimic range is some pretty serious business. Rototurret won't vaporize to Parasite and Enigma can finally get one over on Yog.0. All of this at 0 cost ...yeah...this card is not "meh"

(All That Remains era)
ADHiDef 52
I have seen many reviews passing up this card. However with everyone valuing Net Ready eyes, why not value this card. So many otherwise solid 2 or 3 strength cards and so many runners using Yog.0 and Mimic. People ask for answers but this helps to combat the very weakness. — Zail 16 Jun 2015
@ADHiDef - Totally agree. Patch is a very nice card in a Weyland deck that love Lotus Field and Architect. I've used it many times before, and it's been wonderful to shut Net Ready Yog out of a server forever! — Mechanoise 6 Oct 2015
5

Patch was a sleeper card on release, and one I almost never see played. But, I think like fine wine, its status has only improved with time, and it's one card that has definitely grown on me. What I love about it is its flexibility, and that it grants the corp unparalleled counterplay. Let's look at some popular runner cards to figure out why.

So why isn't this in every single deck? Well, there's a catch—it's in Weyland, and it costs 2 influence. Weyland, the one corp with an undisputed monopoly on advanceable-for-strength ice, gets a card to, shockingly, do the equivalent of just that on other ice, albeit in a more limited fashion. Sadly, at two influence, it's really hard to justify exporting this into other factions. That said, I like to do just the reverse—import ice from other factions into my Weyland deck, and then drop Patch on them.

Should you use this in faction? Yes, or at least, I do, and it's now a staple in my Weyland decks. Out of faction, it's a tougher sell. But, I still drop it in a deck when I've got faction to burn, usually Jinteki, where a few strength on a single piece of ice can be the difference between victory and defeat. So try it out, and remember to watch the runner's play like a hawk to get the maximum effect from Patch. Don't drop it prematurely either; it usually serves you best when played in a reactive capacity.

(The Universe of Tomorrow era)
Pikeman 279
One thing you have to watch out for is that Patching a strength 3-4 ice puts it within D4v1d range. Most anarchs using fixed strength breakers will also run one or two copies of D4v1d as well, so keep that in mind. If it is something like Spiderweb or Enigma with multiple subs though, you are good. — WayneMcPain 5 Oct 2015
Crazy good card with a few pieces of ICE. HAs seen competitive play in some decks running Changeling and Lotus Field. Archer is great with it too, if their answer to Archer is Atman. — hi_impact 5 Oct 2015
Yeah, I have it in one of my Jinteki decks that also run a couple Chums--the Chum can be broken, but it's 1 credit to rez, Patch is 0 to install, and the strength can be leveraged in more scenarios than it at first seems, I feel. And +1 to the reactive play--don't be afraid to hang on to 'em! — urlGrey 21 Aug 2016