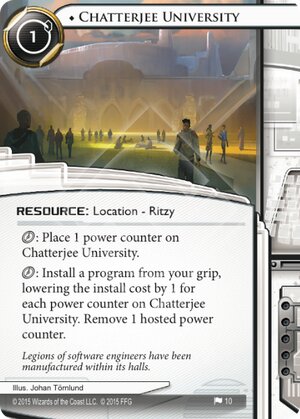 click: Install a program from your grip, lowering the install cost by 1 for each power counter on Chatterjee University. Remove 1 hosted power counter.

Legions of software engineers have been manufactured within its halls.
Illustrated by Johan Törnlund
Decklists with this card

Chatterjee University is a new, single-card economic engine. And its simple surface belies an unbelievable amount of mathematical complexity.

(Here's a quick review for the math-phobic: it's probably not as good as Armitage Codebusting in your deck. Play that one instead. Review over, stop reading.)

But, when you install that first card, you are left with X-1 counters. This could potentially save you up to another X-1 credits, for no additional investment. Suddenly you've spent X clicks charging up, and saved 2X-1 credits. That's a pretty good payout; but Armitage Codebusting offers you an even 2X credits for X clicks (so long as X is six or less), and those credits can be used for anything, not just installing programs.

So for Chatterjee to have a greater payout, you need to either be installing at least two REALLY BIG programs (Femme Fatale, Garrote, Torch, Morning Star, Alpha, or Omega), or you need to install at least three programs.

But as you start increasing the number of programs you intend to use it for, we run into a problem. Sure, if you click it to 5, and then install Shrike, followed by Striker, followed by Sherman, you're getting a return of 12 credits on your 5-click chargeup, which is slightly better than the 10 credits you would have gotten on Armitage. But order matters. If you click to five, and then install Sherman then Striker then Shrike, you're only saving 3+4+3=10 credits, meaning you're back into Armitage range.

Your best case scenario starts to look really, REALLY good. Getting 4 credits per click, for seven clicks, on an initial investment of only a 1 resource, is disgustingly efficient. It makes Liberated Account look foolish, and Magnum Opus cries a little. But too pull that off, you need to install seven programs, with your most expensive programs being played first and your cheap programs being played last.

Most decks don't want to play seven programs. Even fewer decks want to be playing giant programs like Torch. Even fewer decks want to spend the first 2 or 3 turns of the game doing nothing but clicking up the University. Chatterjee U also doesn't synergize with either Modded or Self-modifying Code, two staples in the Shaper arsenal. And on top of that, the mental energy required to pilot a CU deck will burn out most players as they fight through three or more rounds of Swiss.

So, in conclusion: Armitage Codebusting is easier to include, more versatile, gives roughly equivalent returns, and won't fry your brain like an egg. But for the truly ambitious, Chatterjee University will be waiting, with promises of untold riches in its eyes.

(Kala Ghoda era)
tiedyedvortex 4694
Now, what if you say, click CU 5 times for 5 counters, install Shrike, click CU again, install Femme, click CU again, install...I dunno, Torch. Those last 3 clicks on CU were each worth a lot, and didn't require installing those programs in a certain order. Aren't you approaching a recurring Modded at that point? That's kind of cool. I suppose I would most closely compare this to Kati in terms of drip-click-investment. — PureFlight 31 Jan 2016
...another reason to run Armitage? It'd be worth the bad pub (assuming this wasn't splashed into Valencia) for Liz Mills to bulldoze your fully loaded CU, turning your invested tempo loss into a real one. — GrantZilla1979 1 Feb 2016
NBN is gonna Breaking News-tag-kill this after you just finished clicking it up. — JahRood 11 Feb 2016
There might be some limited usefulness with the criminal icebreaker Golden. A significant drawback for Golden is that the cost of installing it, breaking ice, de-rezzing ice, and reinstalling it is so high that there are few sentries worth derezzing. — jiriku 23 Sep 2016
@jiriku try derezzing Archer. I've done it twice and it is pure pleasure. — byjarke 25 Oct 2016