2credit: Break all subroutines. Use this ability only by spending credits from stealth cards.

In running, as in reality, all elements are connected.
Shaper • 23 Seconds 6
All sets:
Links: Decklists | ANCUR 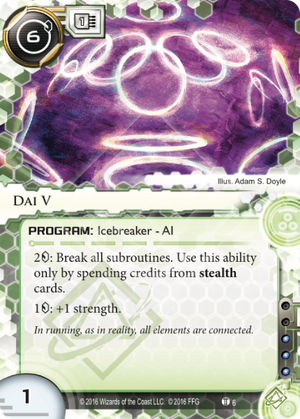 Oh man, is this a tempting card. Stealth has always had a place in the meta, and with the recent nerf to Faust people are looking for a strong AI alternative.

But stealth has always had two big problems, both of which are amplified in Dai V, and mean that this is going to struggle as a primary breaker.

First, stealth requires that you get both your breakers and your stealth-powering cards down before you can safely run. The more stealth credits a card needs, the more you need to set up to use it effectively. This slows you down, and puts you at risk of losing to a faster deck.

For a standard breaker (i.e. Refractor or Dagger), the slowdown is pretty small. These cards only need one stealth credit to be functional against any piece of ice with 5 or less strength, and with a deck stocked with Cloaks, Ghost Runners, Lockpicks and Silencers it is pretty easy to find a stealth credit by turn 2 or 3.

But Dai V needs not one, but two stealth credits to function. You can burn through a Ghost Runner in a pinch, but usually you're going to want to have two Cloaks up and running. And it must be Cloaks--it's not a fracter, decoder, or killer, so unlike Switchblade, you cannot use Silencer (or Lockpick or DFG). This limit on stealth sources makes the 2 credit requirement a significant hurdle.

Which brings me to the second limitation. Stealth puts a cap on how many pieces of ice you can break in a single turn. If you have 4 stealth credits at your disposal, and a server has 5 pieces of ice that each require a stealth credit to get through, you're locked out. Even if they haven't managed to stack a server that deep, there are many cases when you might want to make multiple runs in one turn, and once servers have been double- or triple-iced that starts to get real taxing. Ghost Runners is a temporary solution, but only temporary. Mirror gives you a boost if the first run is on R&D but otherwise is just a discounted CyberSolutions Mem Chip.

And Dai V makes this even harder. If Dai V is your only breaker, it's going to cost 4 stealth credits to get through a server consisting of a Vanilla in front of a Quandary. Even if you have all three Cloaks out, you're still going to need a Ghost Runner to support it or you will not get in. That's a huge rig to break two tiny pieces of ice--if that's your only gameplan, you're not going to do so well.

On top of that, Dai V isn't even that efficient of a breaker once you do get your stealth on. A base strength of 1 with one-for-one boosting gets to be a real problem on larger pieces of ice--that's Zu levels, and anyone who has ever had to break a Wormhole with Zu knows how unpleasant that can be. And for the privilege of using this breaker, you paid 6 to install it.

Dai V is begging to be used to fill in gaps in a stealth rig--if you can't find your Refractor, Dai V will let you threaten the corp while you dig for it...but only if you can get the right mix of Cloaks and Ghost Runners first, and that's a pretty big if.

Speculation time, though--the console in this same pack, Mirror, is clearly the console of the runner Ele "Smoke" Scovak (smoke and mirror, get it?) who has been quoted in flavor text before. A stealth console suggests a runner with a stealth ability. If that ability provides any way to get additional stealth credits, that could potentially make Dai V viable as an early game threat. We'll have to wait and see.

(23 Seconds era)
tiedyedvortex 4544
I'm going to guess the Runner isn't happening, primarily because recent cycles have paired Runner / Consoles in data packs, and this one is missing. — LynxMegaCorp 19 Jul 2016
Dai V fits an interesting niche where it is great against low str multi-sub ice. Stuff that Dagger and sometimes Refracter struggle with. Really interested to see how people use it to flesh out their breaker suite. — PureFlight 19 Jul 2016
It's kind of like the Sunny AI breaker (low starting power, high install cost, breaks all subroutines), so it's a good fit if your primary suite struggles against multisub ICE or if you've just facechecked one too many Komainu and are sick of it. — LordRandomness 20 Jul 2016
Re-reads start of review..."Strong AI"...goddamit :v — LordRandomness 20 Jul 2016
I'm curious about the wording on the card, however. I've never seen the wording of "Break all subroutines" plus the cost of installing and the fact it can only be used with stealth credits.... it makes me wonder if you are making a run on a server with multiple pieces of ice protecting it could you use Dai V, boost the strength up high enough to handle all the ice and then use the stealth credit ability to break all subroutines across all the ice? Naturally this wouldn't work on Turing but....I don't know. — Pravikun 1 Aug 2016
Icebreakers only interact with the peice of ice being encountered. So it certainly would not break the subroutines on all ice on a server. Such an icebreaker would be ludicrously overpowered — Robotoast 9 Aug 2016
This is the cycle where we are already seeing 2 anarch runners in the same cycle and the potential for PSK to at least pop up given her picture on #Rumor Mill I don't know that another pairing isn't possible but we've already seen 2 anarchs and a criminal so I think the likelyhood of a shaper at this point is slightly less than 1 in 6. Still, printing consoles and runners in separate packs isn't unheard of, look at #wizard and #grimoire, or #Noise and #Turntable. — killj0y 11 Aug 2016
I just saw on fantasyflightgames.com that Ele "Smoke" is indeed happening. She is in the forth data pack her ID comes with a stealth credit. — quailman2101 15 Aug 2016
5

When you happen to run into Littlefinger. GS striker M1 user can harvest 5 credit while Dai V user can't.

When you run into Shiro. GS striker M1 user can see top card of R&D or cause credit leak. while Dai V user can't.

When you run into Aiki. GS striker M1 user can hope for card drawing. while Dai V user can't.

I think this is intended by designer to make this harder to use to make decision.