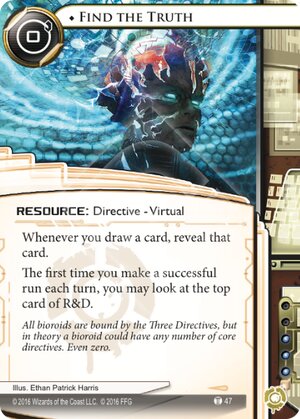 Whenever you draw a card, reveal that card.

The first time each turn you make a successful run, you may look at the top card of R&D.

All bioroids are bound by the Three Directives, but in theory a bioroid could have any number of core directives. Even zero.
Illustrated by Ethan Patrick Harris
Decklists with this card

So I agree with H0tl1ne in his/her review about Laramy Fisk, that is a pretty neat interaction. I would however like to expand the review to include the Criminal faction in general.

My occasional efforts at Adam decks are usually fun but somewhat lacking (disclaimer: I have not tried Adam with this new directive at this time). The issue I continually come up against in his faction is Economy, especially when you're already spending influence on breakers.

This new directive got me thinking along these lines of run-based synergy in general, and who does that best? Well, they are fairly unpopular for quite some time now, but I think nobody would disagree that Crim does econ best, especially in light of the recently released Temüjin Contract.

You know what else Criminal has been struggling with, and that is having a persistent R&D threat. The Spy Camera is a neat idea, but even in Geist the card has proven to be less potent than in Shaper decks.

Combine these two questions, and find your answer in this card. You know what looks especially appetizing? Play this alongside an Enhanced Vision in Silhouette. In a single Security Testing run on HQ you can expose any installed card of your choice, see what's on top of R&D, and have the Corp give you a sneak peek at HQ all at once.

This much information would give Agent Mulder all the validation he might need in his weakest moments. The truth is out there, and this card will help you find it.

The in-depth analysis of this card has already been done. I have but one thing to add.

I know three influence is a bitch, but listen to me -

This is far beyond your regular jank, but walk this path with me -

Basically, you can choose the order in which the triggers take place. So - FtT allows you to see the card before you decide to either force the draw or not.

And now to answer the ultimate question: is this the card we were all...

Is this the card that some of us...

Is this the card that I have waited for? Or rather, does it make Fisk viable?

Obviously not. Nothing ever could make Fisk viable. But good effort's good.

(Escalation era)
H0tl1ne 414
Surely you can combo these effects with Equivocation (coming in Martial Law) and create a crazy 2-card Look/Dig effect on RnD run success that... is pretty damn insane in magical Netrunner Christmas land. The influence will bankrupt Laramy quickly however. — umbralAeronaut 18 Oct 2016
Try drug dealer + dr.lovegood + the source in laramy. All 3 are tutorable by Hostage. DrLove can either negate the cost of drug dealer, becoming blue pancakes, or negate the extra cost and self destruct of the source. You could go even further with traffic jam or chetana or film critic or clot. Establish remote lock, make all the corps agendas extremely difficult to score, make them draw cards, use rumor mill so they can't be jackson'ed away, then use turning wheel/legwork/HQI/nerve agent to dive into an HQ guaranteed to be flooded. — ChairmanHiro 27 Oct 2016
I've happened to utilize the tactics you described, but in Iain Stirling deck. Putting it in Fisk seems fun though. — H0tl1ne 27 Oct 2016
...I've just typed in that "putting it in Fisk seems fun". I'm currently completely out of any self-respect. — H0tl1ne 27 Oct 2016
4

So the obvious point here is that now that there's a fourth distinct Directive, Adam can choose one of the four to not have to start with. I'm going to be uncontroversial and suggest the best option to skip is probably Safety First, simply because it ironically makes early game runs against Jinteki (and some Weyland/HB builds) a lot more dangerous. You should probably still run Safety First though, because once you've got some other way to shore up your hand size up and running (Brain Chip?) the free draw is really strong. So the main value is in DELAYING Safety First until you're ready to deal with the downside, not getting rid of it entirely.

Now, the card itself. The effect is strong by itself (it's easy to see this from what other things that reveal the top card of R&D like Deep Thought require of you), and I honestly think the downside gets less nasty the better you and your opponent are at Netrunner. If your opponent is good, they'll be able to roughly guess what they need to be defending against ANYWAY based on cues in your initial turns. It's the same reason Expose is often considered a "newbie" thing: Once you get a feel for the game, you can gauge what ICE you need to be prepared to faceplant into without needing it. It does mean you can't pack any nasty surprises into your deck though, unless you work around it with "tutors" like Self-modifying Code. Or by ending the game really quickly.

The other good news is that it synergizes well with Always Be Running and Neutralize All Threats to produce insane levels of early game pressure. You can hit HQ pretty reliably on your first turn (clicking through the ICE if necessary), score a double access, and reveal the top card of R&D to see if you ALSO want to hit that. This is before even considering any cards that you might have in your deck proper! Plus, this card lets you pitch your mandatory run into Archives without feeling too bad if the situation demands it. These two things together put the Corp into a nasty situation on their first turn. They can:

There are answers to this (any multi-ETR early game ICE like Spiderweb, the usual "get Agendas out of HQ" suspects, NAPD Contract and Fetal AI, etc) but most of them require investment on the corp's part which means they're setting themselves back to counter something you're doing for essentially free. This can do one of two things:

In summary, I think the main reason not to start with this card installed instead of Safety First will be if you want to surprise your opponent with something or you're playing a certain type of event-heavy deck (where the clickless draw from Safety First is so valuable that it's worth giving up the R&D pressure on offer here). Since Adam's signature console lets him snowball games (i.e. KEEP winning if he STARTS winning), a free tool to help you start winning is powerful. You COULD replace other Directives instead and in some cases this is important (Industrial Genomics: Growing Solutions makes Neutralize All Threats a huge liability, for example), but you can make this decision after seeing what your opponent's ID is! This also means you can take Safety First instead if you judge that it will be safe enough.

Now what about using it in other factions? Eh, probably not. It's too much influence and it loses a lot of its appeal if you're not starting with it installed (meaning you have to find it and it essentially costs a click to draw)

(Escalation era)
LordRandomness 236
This card also works nicely with Omar Keung (though at a high cost to his precious 12 influence) as you can use his click ability and then see if the top card of R&D is worth accessing before choosing whether or not to access cards from that server. — YourGo 12 Oct 2016
Statement from Damon : you choose your installed directives before drawing your hand, after knowing the ID of your opponent. — Lupus Yonderboi 12 Oct 2016
Oh good, that's what I was assuming, Lupus. It's really helpful for preventing Adam from falling prey to flatline decks without necessarily giving up Safety First in every matchup — LordRandomness 12 Oct 2016
Just played my first build with Finding the Truth (using few events + Street Peddler to hide my options) and wow, does it enable the laziest aggression, ever. 3/5 of my agendas came from Finding the Truth triggers, and this was in Jinteki. I almost never feared running anything because I still knew what card was coming up. 7 / 5 would play again. — LynxMegaCorp 13 Oct 2016
I'm actually a bit surprised by that ruling. I'd of thought you would have to pick your three directives as part of your deck just like any other cards. The fact that you can choose which three after seeing your opponents ID is pretty big. And any new directives released are a huge addition to Adam, giving him a lot of different building options. — quailman2101 16 Oct 2016
Well the obvious parallel is with Jinteki Biotech: Life Imagined...although it does specifically say that you can swap it before taking your first turn. Still, it suggests the direction they want to take with these sorts of abilities. — LordRandomness 18 Oct 2016
because Omar is a constant ability and Find the Truth is a conditional ability, the decision of which server the run is on is made before the top card reveal. — Manticore 6 Feb 2018
The first part of Find the Truth is certainly conditional, but it looks like the second part is constant. http://ancur.wikia.com/wiki/Abilities_Explanation_Ruling (Qs 2, 4, & 14) — KingMerrygold 6 Mar 2018
And isn't Omar's ability a paid ability? Which would mean it gets resolved after constant abilities AND conditional abilities? So wouldn't find the truth interrupt it? Or am I reading that wrong — KingMerrygold 6 Mar 2018
@KingMerrygold: The Rules Reference, which is both much newer and more official than that ANCUR page, has the following under "Conditional Abilities": "Some conditional abilities use ordinal events as trigger conditions (e.g. “The first time each turn…”)." So the second part of FtT is definitely conditional. As for Omar, his ability as a whole is clearly paid, but I think the middle sentence kind of breaks free and becomes a separate, temporary, constant ability while the overall paid ability is being resolved. — Absotively 26 Mar 2018