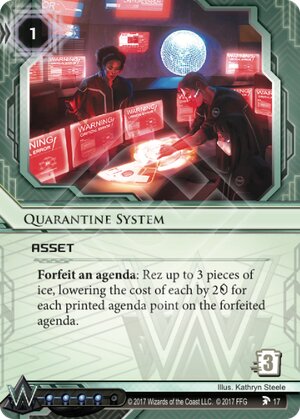 Forfeit an agenda: Rez up to 3 pieces of ice, lowering the cost of each by 2credit for each printed agenda point on the forfeited agenda.

Illustrated by Kathryn Steele
Decklists with this card

This is essentially a support card for Jemison Astronautics: Sacrifice. Audacity. Success.. Without Jemison the cost of forfeiting an agenda is absurdly high as it massively delays your victory. With Jemison that same cost becomes the prime benefit of Quarantine System. If you don't understand this, please read up on Jemison Astronautics: Sacrifice. Audacity. Success. first. I'm going to review this card assuming you use it with Jemison.

Looking at the basic numbers it's 1 to rez, which is easy. 3 is a problem since Quarantine System is the most reliable way to trash agenda's (see my review under Jemison Astronautics: Sacrifice. Audacity. Success. for more details), though to be fair even if it was 5 it wouldn't matter much, this is a card that the runner is gunning for or going to leave alone, not one that will be opportunistically trashed. At 4 influence Quarantine System is not going to see play outside of Weyland, but due to being tied to Jemison it wouldn't be anyway.

Since Quarantine System is an non-unique agenda it's not vulnerable to Rumor Mill, since it only makes sense to rez on your turn Interdiction is also not a problem. Employee Strike is a major issue, but that's a problem with Jemison rather than Quarantine System.

An important thing to note with Quarantine System is that, as I understand the relevant ruling, you do not have the option to rez 0 pieces of ice, it's 1-3. If you would rez 0 pieces of ice the effect wouldn't change the game state. This means you need to have ice available to rez and be able to rez it with the discount applied.

So what ice works well with Quarantine System. Unlike the more limited but otherwise similar effect of Haas-Bioroid: Architects of Tomorrow the list is kind of long. Still, there are a few highlights.

Assuming you forfeit a 3/2, 4/2 or 5/2 agenda, which is the highest number of agenda points you will generally forfeit:

If only only forfeit one agenda point:

Whatever you choose though it's important to protect Quarantine System itself as any savvy runner will try to trash it. There are ways to compensate, mainly including 3 Quarantine System and 3 Oberth Protocol for emergency forfeiting, but it's still a major threat to your game plan.

All in all Quarantine System is an important part of any Jemison Astronautics: Sacrifice. Audacity. Success. deck but unlikely to see play outside that particular identity.

(Daedalus Complex era)
Silv 334
Archer is only four to rez in addition to the forfeited agenda. — quailman2101 19 Mar 2017
There needs to be more ways to rez ICE outside of runs. There are precious few ways to do that right now and many of them are ID or faction specific (like this is for Jemison and Beta Test is for Haas). Having more ways to rez ICE on command would put a stop or a real monkey wrench at least into several of the most broken runner cards/combos. It would hurt the DdOS, False Echo, Hyperdriver combo. Dido for the Turning Wheel, Au Revoir, Snitch combo. It would help versus the stupid, stupid blackmail decks. And it would be helpful versus Leela, who is quite overpowered against 90 percent of corporation decks. I'd like to see more ways to rez ICE on command. See my decklist, Some New Card Ideas for one such possibility. — quailman2101 19 Mar 2017
Err, whoops, thanks. Confused strength and cost. Will edit. — Silv 19 Mar 2017
big wall of text - no content — Dr.Evil 19 Mar 2017
Hold on. CAN you use this to rez ICE as the runner approaches it? If so, would it ever be worthwhile to use this as a suprise against an opposing run by rezzing something for cheap? (Hell, you can even slap advancement counters on an advanceable ICE this way...) — LordRandomness 19 Mar 2017
Yeah, definitely looks like you can use this mid-run. It would be funny to rez and immediately put three counters on a Woodcutter. I don't think this would usually be worth it though. But if you got a win that way, I'm sure it would feel pretty good! — quailman2101 19 Mar 2017
It's a paid ability so it can indeed be used in the Timing Structure of a Run 2.3 window, just in time to rez the ice. A bit of a hail mary play but if you have a way to move the advancement tokens afterwards (I believe one is coming up in the Red Sands cycle) it — Silv 20 Mar 2017
... (hit enter accidentally) is not as crazy as it sounds. — Silv 20 Mar 2017
Space ICE is a bit interesting with this. You can rez an unadvanced Wormhole by sacrificing a Hostile Takeover advancing Wormhole and paying a single credit. You could rez an unadvanced Orion for a 2 point agenda and 2 credits. — butzopower 8 Apr 2017
Jemison's ability is to place advancement tokens, not to advance them, so simply forfeiting won't trigger Oberth Protocol. — Agenarchi 10 Aug 2017