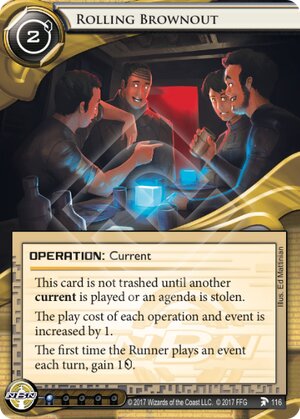 The play cost of each operation and event is increased by 1.

The first time the Runner plays an event each turn, gain 1credit.

What's that you say? "Who's Donut?" "I've never seen that card before?" "Why would anyone play that card?"

The third question answers the first two. The fact is, operations and events are pretty dang important. Very few decks make their economies work without any form of burst econ, or sneaky one-use tricks.

Of course, the runner could simply not play an event until they bust the current, in which case you are just down 2 credits. And to make that happen you had to run a deck with very few operations, a risky proposition against any runner who likes to hit HQ and trash stuff.

But it's one influence, I guess? In case you wanted to play this bad card somewhere else?

(Revised Core Set era)
tiedyedvortex 4694
I think my biggest problem with this card is that it's competing for the "econ denial current" slot with Scarcity, Service Outage, and Manhunt. I'm only going to pick one for my deck, ya know? — PureFlight 21 Dec 2017
1

I think people are underselling this card. I agree that it doesn't work in most decks, such as Sol, but I think this card is pretty scary in one deck: Spark Agency: Worldswide Reach.

Let's get the disadvantage right out of the way: Your operations cost 1 more to play. This seems daunting, but there ARE ways to dance around the weakness. At first glance it seems to be, "Don't play operations at all" but I think this is a mistake. I think a better strategy is to cherry-pick your operations for maximum effect.

Raw Economy: Hedge Fund, IPO, Beanstalk Royalties, etc. If you use those with this current, you're doing it wrong. This makes your profit one less from all of these cards, making them way less efficient. Running something like Biased Reporting might be okay because it has a huge potential profit, but otherwise, you should steer clear from these.

Trace Cards: Hard-Hitting News, SEA Source, Hellion Beta Test, et al. The basic formula for MOST trace cards is trace=cost+1. With RB out, it becomes trace=cost. This pretty much sucks unless you have Primary Transmission Dish or the runner is so down on money that it doesn't matter anyway.

With about 50% of regular NBN operations disqualified, what's left?

Operations You Do want

Gotcha cards: Basically, operations that don't rely on an economic advantage to make full use of, or use efficiently, their effect. Hunter Seeker, Salem's Hospitality, Ad Blitz, Casting Call, etc. Sure, paying an extra credit to use your tech is kind of bad, but using Salem's Hospitality for 3 credits instead of 2 doesn't significantly affect the card in any terms of its ability.

So, what do you fill up your deck with now that you have 12+ slots open?

Well, if you're playing Spark Agency: Worldswide Reach, you fill up on as many Advertisements as you can. PAD Campaigns, Launch Campaigns, and CPC Generators will become your economy while actively draining theirs. Imagine an opening turn consisting of an Ad, CPC Generator, and Rolling Brownout. You rez one of them on your turn, then the next on the runner's. In order to play a measly Sure Gamble, the runner will have to click for credits 3 times and play it on their fourth click, while probably you gain a credit from CPC Generator. This is pretty great. If you want to go the FA root, you can trade your Biotics for Calibration Testings.

Overall, I think this current fils a great niche in Spark, even if it might not make it into other decks.

(Sovereign Sight era)
Handsome Jack 1600
"PAD Campaigns, Launch Campaigns, and CPC Generators will become your economy while actively draining yours." Typo at the end of that sentence? — lunchmoney 9 Jan 2018
Fixed! — Handsome Jack 9 Jan 2018
Newbie here, this was an interesting read, thanks. Also realized the implications with the agenda Rebranding Team (all assets gain advertisement). ... Looks like I've got a deck to build. — breakingpoint 10 Jan 2018
Having played with this, I can confirm that this is better than it looks. It plays out in two ways: they throw an event into this and you recoup the cost of playing it right away, or they steal an agenda and then you are in the hole. I think this works well in glacier with spark so that their steal is going to cost them. It is a neat complement to Spark's tax. — Severijn 26 Jan 2018
0

This card is probably too situational to be good. It isn't bad, but are you gonna get value out of this? Probably not.

Let's first address the elephant in the room and talk about the ID which gets the most use out of currents, New Angeles Sol. With them, a current usually keeps coming back, meaning even if the runner steals an agenda, the tax will remain. The problem with this agenda is twofold though. First off, Sol is an operation based ID. They don't do asset spam, or they don't do it well at least. Secondly, they love cheap currents, ones they don't have to bankrupt themselves for every time it has to be played again. Nothing feels quite as bad as paying 3 credits to replay a Door to Door, only to have to replay it AGAIN after the runner steals another agenda.

For this reason, Sol has historically been a huge fan of three currents: Paywall Implementation, Targeted Marketing and Scarcity of Resources. How do these stack up against Rolling Brownout? While PI does cost 2 influence, it is free and can give the corp a huge tempo gain as the runner needs to run and steal an agenda to get rid of this, most of the time. Targetted Marketing is also free and puts the runner in a tough spot. Do I play that card I really need and give the corp a whopping 10 credits, or do I play sub-optimally?

The obvious comparison is with Scarcity and the fact that this card is only 1 credit vs 2 for RB is already a huge advantage. Not only that, it makes resources 2 credits more expensive to install, while not making your assets more expensive. Even if you go out of your way to not play operations and the runner foolishly plays events while this is out (maybe you are facing one of the few event-heavy-resource-low decks such as PVP Kate), this takes two turns to make you break even. The math gets better after that, but wouldn't you rather give the runner a tempo hit by making them pay 6 for a Temüjin Contract or 4 for a NACH? They will just keep on to their Dirty Laundry until they snipe an agenda, at which point you either pay 2 AGAIN for this (as Sol) or it is gone forever.

How about other ID's? NBN decks like Controlling the Message could maybe use this. It only costs 1 influence, so playing it out of faction is really easy as well. But does that make it playable? I guess, but who would go out of their way to add this to their deck?

I love seeing new NBN currents, since Sol is my favorite ID. But this is not one I will likely play.

(Crimson Dust era)
Cpt_nice 1549
I don't think this is a Sol Current. I see this in Spark AdSpam to shut down Event Economy. Spark doesn't play operations anyway and this can be used in tandem with Scarcity to bleed the runner out. — Handsome Jack 31 Aug 2017