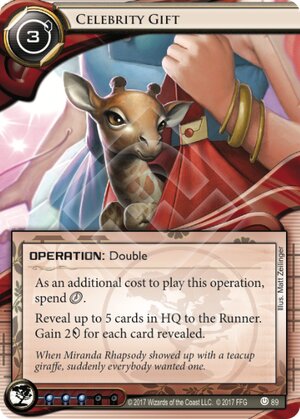 Reveal up to 5 cards in HQ. Gain 2credit for each card you revealed this way.

When Miranda Rhapsody showed up with a teacup giraffe, suddenly everybody wanted one.
Illustrated by Matt Zeilinger
Decklists with this card

"Looks pretty good... but it's not edgy enough,"

"But it's a cute tiny giraffe, it's not supposed to-"

"Put some wires or something in her other arm."

I love this card for several reasons. First, as already mentioned, it's a solid econ card for Jinteki, something they don't get all that often.

Secondly, and most people consider this a downside, you have to reveal your entire hand to make it the most effective. And while it's true that this can be awkward for Jinteki, it also opens up a lot of great plays that exploit the information given to the runner. The obvious one is to show a hand full of nasty traps. The runner won't be going there any time soon, so you have a bit of breathing room when you do get some agendas in HQ.

The other, I think, has the potential to be even more powerful, albeit somewhat janky/risky.

Show them a hand full of agendas.

"STONE THE BLASPHEMER", you say. That's stupid! And most of the time, you would be right. But when the runner goes for a Legwork, you have a nicely advanced Allele Repression the runner thinks is an abanonded Project Junebug, and you also have 3x Snare! in Archives...

(Or I guess you could try to lure them into some kind of horrible Whirlpool/The Twins/Komainu/Cell Portal/Janus 1.0 jank.)

(Kala Ghoda era)
TheBytemaster 49
Or you could run it in Weyland, showing the runner your hand full of Punative Counterstrikes as you drop down Government Takeover. — taneru 31 Jan 2016
Muhahahahaha, I like the way you think. I'm going to have to try that now. — TheBytemaster 31 Jan 2016
So after reading one of the Android novels I think that the wire(s) in Miranda Rhapsody's arm(s) indicates that either she IS a bioroid or has modified herself to look like one as some kind of fashion statement. — Zakalwe 13 Apr 2016
She's a clone, not a bioroid. — Pink 25 Nov 2017

it's more funny now that the art is different =)

With Celebrity Gift you're basically selling information to the Runner for , which might sound a bit questionable at first due to Netrunner being all about information, but that would be ignoring how much Netrunner is just as much about misinformation. This is one of my favourite cards in the game because it is just useful, intelligently designed, game-changing fun. And, with it now being implemented into the Revised Core Set, anyone will be able to use this cheeky sod right out of the gate.

Looking at the basic fundamentals of the card, Celebrity Gift costs 3 s and takes two s to install; as a in its lowest form is a , let's go with the idea that Celebrity Gift is going to cost you 5 s. Because of this, you're going to need to reveal at least 3 cards from your hand in order for this card to be worth playing, although, realistically, you're probably going to reveal your entire hand because, well, why wouldn't you? If you do this, you will gain 10 s from 2 s, which is crazy.

This allows for Celebrity Gift to be a big economic benefit to Jinteki -- it's home faction -- as well as whatever other faction you're likely to shove it into, although this is probably much less worthwhile due to the influence cost and your option for other, cheaper alternatives such as Hedge Fund, Successful Demonstration, or Medical Research Fundraiser, even though I would recommend Celebrity Gift for more than just its economic benefit.

Celebrity Gift's best feature is that it allows you to seriously mess with the mind of your opponent, making them wonder what the hell you're actually planning to do with all that crap in your hand.

Show them a hand full of traps? They'll avoid your HQ, which is good; allowing you to guard it safely or bung them wherever you like, making the Runner think twice before they run anything, which is really good.

Show them a hand full of agendas? They'll rush your HQ, which is bad; unless you booby trap your HQ beforehand, which is good.

Show them a mixture of both? They'll be considering either of the above, which is great; until you then install one of those revealed cards into a remote server, tearing their mind in two, which is fantastic.

Celebrity Gift is all about screwing with your opponent and getting paid, two things that should never go underappreciated in Android: Netrunner. You're dangling a carrot in front of the Runner to get them to give chase, and when they do, you pull the carrot away and kick them in the face.

Also, the artwork is adorable, goddamn.

(Sovereign Sight era)
CrimsonLobstrosity 14
This can pair well with [Cerebral Imaging: Infinite Frontiers](/en/card/03001) as you have more control on the information you sell. You can filter out your agendas for cash. — amanning 30 Jun 2018
8

One of my favourite bits of design in the whole game, for several reasons.

Gift isn't as common as it was outside of CI these days, but it still stands up as a lovely card on its own merits, and worth thinking about for most Jinteki decks.

(Order and Chaos era)
DavyRam 9
It has particularly good synergy with Subliminal Messaging. — umchoyka 13 Feb 2015
For added fun, reveal four cards from a five card HQ and watch the Runner fret about what specific card you didn't want them to know about... — LordRandomness 22 Jan 2016
5

After playing with Celebrity Gift for awhile out of Chronos Protocol: Selective Mind-mapping and Jinteki: Potential Unleashed, first reluctantly and then wholeheartedly, I've come to some conclusions:

Now that this card has returned in SU, it’s worth taking another look at it. Celebrity Gift is an enormous operation-speed credit machine with a huge downside. You almost always reveal the entire 5 cards, netting 7 credits, or rather 3.5 credits per click. That’s an obscene rate.

However, in recent times, we all realized the painful truth: Don’t mind game people with this card. Revealing traps is bad. Revealing that you don’t have traps in hand is bad. Revealing that you do or don’t have agendas in hand is bad. You’re not mind gaming, you’re just giving the runner information. Any deck that plays this needs a way around its downside of giving the runner information, or you it can lose you the game. The clearest way to lose is to reveal an agenda flooded hand. The runner can fetch singles on HQ and slaughter you.

In other words, Jinteki glacier decks are great gift vehicles. It’s no secret that you’re putting an agenda into the remote at some point, and you usually run no weird combos or tricks that you must keep hidden. With SG’s new filtering tools, and also the jammy gameplay, it’s unlikely you privy the runner to a flooded HQ.

Overall, this is a very strong card. It’s basically two economy cards in one. However, its downside makes it much worse in trap decks.

As someone who loves trap decks, I still hate this card. Even in glacier decks.

I don't like to use it. But my partner shows 4 cards out of 5. It's less money. But more mind games and it works

Revealing traps isn´t that bad, at least if your oponent plays Legwork