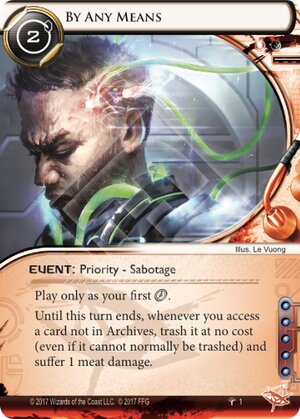 By Any Means 2[credit]

For the remainder of the turn, whenever you access a card not in Archives, trash it and suffer 1 meat damage.

Illustrated by Le Vuong
Decklists with this card

By Any Means is a potentially powerful event. Being a priority event, you'll need it in hand when your turn begins (no Same Old Thing). After spending a and 2 to play it, you have 3 or possibly more s to make it worth the investment. Ideally then, you'll want to use all remaining s to make runs. This could be worth it against an asset spam deck. You may end up saving a lot of s if you can access certain assets/upgrades. But as you do "trash" the cards, CTM and Hostile Infrastructure still trigger. And you have to pay the Gagarin tax. You'll probably trash 3 or 4 cards max.

This card seems to be better utilized against central servers with multi-access support. You can build your deck around this concept, but you never know if you will be facing an asset-spam deck. So, lets say we hammer the centrals. one, By Any Means, 2, Legwork, 3, The Maker's Eye, 4, another plain old run against R&D or HQ. This will net you 7 trashed corporation cards, including that costly Jeeves, and those un-trashable ICE and Operations. That seems very worth it. But you need to have the correct cards in hand, in play, and the credits to get into the servers; a tall order. And worth noting is the fact that this card can kill you. You have to trash any cards you access. So access too many cards and you could flatline yourself. At least the corporation doesn't have the ability to spring ambushes. But you'll probably need damage protection in the form of I've Had Worse or Guru Davinder (expensive). And those agendas you access? Trashed. Maybe have a Film Critic installed to help with that.

Anyway, I'm out of work in five minutes so... A potentially good card, but it needs a lot of support cards to make it worth it.

So what about this with God of War, Counter Surveillance, and Jarogniew Mercs for protection?

So as Nullun suggested, Deep Data Mining is probably the best bet. Trash 5 cards in one run.

By Any Means us a bad card, disguised as a good card.

Timmy had no success in Netrunner, because piloting always counters him.

Having I've had worse in hand is rolling a dice to prevent the draw cost.

In the end, the card needs at least a clic or two of support, to trash one card from the corp. You're better with Maw, since that trash is random.

Avoid by any means, when played in a non-combo. Other than that, well, it's a card.

So this card may boost Anarchs back up to degenerate tier 1 status.

As of writing this, the Counter Surveillance/God of War deck archetype is real and played, if not top-tier stuff.

And by using its patented multiaccess combo with 20+ tags (obtainable by installing multiple God of War's) in conjunction with By Any Means you win the game. Immediately.

It looks like a Runner equivalent to old CI7 builds, whereby if the opponent has not won on turn 10, they lose, in this case by being decked out.

With some of my testing, it was actually very easy to pull off, (but not out of MaxX: Maximum Punk Rock as she trashes the combo pieces) Jarogniew Mercs with 20+ tokens to protect you from the meat damage, Dean Lister to boost your breakers' strength cheaply, Obelus to ensure hand size and a draw option...

Back up plan includes regular heap breakers, Hades Shard and Clan Vengeance for some regular accesses out of archives, regularly.

In classic Anarch fashion, you don't mind much about what gets hit, but if you do, Titanium Ribs is there to help.

Unless this gets changed between now and Store Champ season proper, I can say that I'll be bringing it - although only to events where I don't mind making enemies...

If for whatever reason, be it skillful counter play from your opponent/not enough time for infinite tags due to pressure, you don't manage to trash absolutely everything, use Hades to access their entire heap. You probably win.

Disclaimer: This was all written before events could legally use Sovereign Sight, so most of this is conjecture.

(Sovereign Sight era)
Brightsides 115
Tl;dr: Netrunner is broken again. — LynxMegaCorp 1 Jan 2018
Seems like a nonbo to me. CS decks don't tend to be particularly rich and have the added struggle that the turn they need to win requires 4 clicks - play MFM, install Dean, install CS, run. By playing this card you make your combo needlessly more difficult to pull off as you now need to ensure prior to the combo turn that you have enough money to pay for CS at the end of the turn before you combo, you need to have Dean or the Mercs already on the board and the corp needs to not trash them (because one of your clicks has to be spent installing one or the other, you don't have the clicks for both and tbh its probably the mercs you install which gives you another tag so makes the combo cost 1 more). This makes the combo harder to pull off and only really improves your matchup against Jinteki where you don't really want to access a bunch of traps in your big CS run as you can flatline before you win. Frankly, if you have got to the point where you can pull off the combo in this way, it would have been easier to just win with the regular combo the turn before. Given that CS decks have hardly been the scourge of the meta, I don't expect this card to provide a meaningful boost to their power level. — TR1S 1 Jan 2018
How do you not die? — AkAnderson 3 Jan 2018
Oh, my bad, you mentioned mercs. — AkAnderson 3 Jan 2018
This crying over a card is stupid. Why would I bother using counter survailence with this to trash 30 cards when I can just access 30 cards and win anyway, without killing myself in the process? — stevensonson 8 Jan 2018