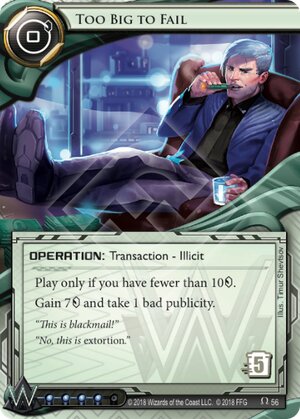 Too Big to Fail 0[credit]

Play only if you have fewer than 10credit.

"This is blackmail!"
"No, this is <em>extortion.</em>"
Illustrated by Timur Shevtsov
Decklists with this card

I'm going to keep up the noble tradition of reviewing cards that have none! It's perhaps not surprising the card's not been reviewed yet, though; it's easy to see what it's about at first glance. 1 for 7 (8 in BABW or 10 in Outfit) is head and shoulders above the efficiency of just about every other card in the game - even the venerable Hedge Fund only gives you 4. It doesn't even ask for any money up front, so you can play this immediately after a Diversion of Funds to get back in the game even if you're completely broke. In terms of "I need money and I need it now", this card has no equal.

That said, there's some notable drawbacks. It does have a trash cost, unusual for Operations, but at 5 it's rarely going to actually come into play unless the Runner is desperately digging R&D or has so much money they were winning anyway. The rider of a bad publicity means this is more of an advance loan than a pure economy card; every run after this is played is going to come with a built-in 1 discount, and if the Runner runs seven or more times after this you're actually losing the money race. While cards that remove bad publicity do exist, I'd argue they're not really worth the effort to counteract this card. So - you need to leverage the loan before the consequences start to bite.

That means glacier and asset spam are probably out of the question, especially since you can't sit back and pile up money due to the "fewer than 10" condition - you have to actually be spending cash. 4 influence also means you're almost certainly not playing this outside of Weyland, which means the only real home for it is rush decks looking to cash in the loan for an early Bulwark, Trebuchet or Tithonium to slam agendas behind ASAP into an Audacity finish before the Runner is fully set up.

Play smaller ICE and the bad publicity makes breaking it trivial; go any slower and that same bad publicity lets the runner grind value out of it to overtake you. This perfect storm (as well as much of Weyland's appropriate "big ICE" giving even more bad publicity) means it's basically ID-locked to Outfit at time of writing, especially since Argus Security has been and gone. Keep an eye on it if bad publicity becomes easier to remove, though!

For decks that want huge cash swings but don't need to keep their foot on the gas quite so hard, Regolith Mining License goes +13 over a few turns, but costs clicks. Government Subsidy and Hansei Review are similarly big money without needing to worry about giving the Runner drip economy, but Subsidy demands you get up the hill of 10 and Review asks for a card. So, to quote No Free Lunch - consider all your options.

Let me introduce you into a world of free stress where you can get your bad credit score fixed,clear criminal records (database) ,you can also spy on your cheating spouse and so on all you have to do is contact Brillianthackers800 AT gmail Dot com and they will solve all your hacking problems leaving you stress free you can also contact them via Whatsapp +14106350697 ......... Mind you i got them to spy on my cheating spouse and they did a good job where i could access her phone remotely without her noticing you can do the same too just follow the process.