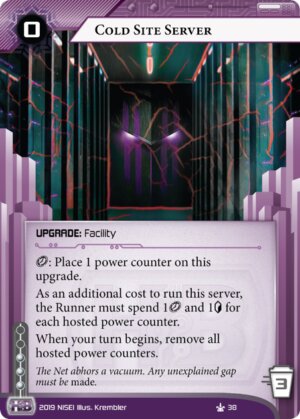 As an additional cost to run this server, the Runner must spend 1click and 1credit for each hosted power counter.

When your turn begins, remove all hosted power counters.

The Net abhors a vacuum. Any unexplained gap must be <em>made.</em>
Illustrated by Krembler
Decklists with this card

Sorta mediocre in most decks, since you are basically just trading your clicks for your opponent clicks with an additional credit on top. You could just play Border Control, which costs you influence and more credits, but will cost the runner A LOT more since they will have to break all ice on a server, get flicked out, and they spend a click to run through it again. HB specifically also has Enhanced Login Protocol, which sticks around till an agenda is stolen and works on any server.

However, this is very obviously meant for MirrorMorph, who ideally will also have 4 clicks to work with. They need ways to trigger their ability, and this is a perfect way to accomplish that. For example, install Architect Deployment Test, advance, click Nanoetching Matrix for money, trigger ID, click Cold Site Servers. Now you essentially taxed the runner a click and credit for free.

I think it is a great card for one ID, but that's fine. Plenty of cards like that. Gold standard rez/trash cost as well.

(Uprising Booster Pack era)
Cpt_nice 1714
The prevalent combo with Cold Site Server so far has been Efficiency Committee - as soon as EffCom rotates out later this year, Cold Site Server will see even less play than it sees now. — BlackCherries 1 Oct 2019
Ah yeah, that is a synergy I forgot to mention — Cpt_nice 1 Oct 2019
It also combos with etr effects like Border Control, because each time the Runner initiates the run they must pay the cost. Although it would rarely happen, you can install an agenda and click this twice to make a server unassailable if you have Border Control in front of it. — dnddmdb 1 Oct 2019
1

Forms a neat combo (as most things do) with Anoetic Void. If you put a single click into Cold Site Server, the runner will have to spend the click to run the front end multiple times to get in, frequently capping them at just two runs to enter. If you click Cold Site twice, a runner who gets bounced by Anoetic once literally can't get back in, unless they are somehow getting extra clicks. Admittedly, this does use a lot of corp clicks to function, but with something like MirrorMorph: Endless Iteration, as mentioned in Cpt_nice's review, you can make a pretty darn chunky server! Usually, though, Anoetic Void + Manegarm Skunkworks is tough enough to break as-is. and doesn't require such consistent upkeep.