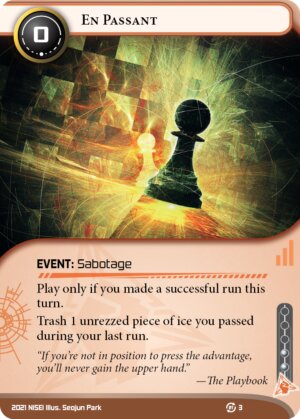 Play only if you made a successful run this turn.

Trash 1 unrezzed piece of ice you passed during your last run.

"If you're not in position to press the advantage, you'll never gain the upper hand."
—The Playbook
Illustrated by Seojun Park
Decklists with this card

This card is extremely elegant from a flavor perspective. It works on a few levels:

Level 2: En passant is French for "in passing". So of course it works on passed ICE.

Level 3: En passant is a special chess move that allows you to capture a pawn. It gets a piece off the board. This card gets an ICE off the board.

Level 4: Pawns usually plod forth one space at a time (just like the program of the same name). But they have a special ability where the first time they move, they can move forward two paces. Without the en passant rule, this would allow a pawn to avoid an interaction with an opposing pawn. Even though the pawn moved two, the en passant rule lets the opponent capure the pawn as if it moved one.

What does this have to do with the mechanics of Android: Netrunner? I will tell you. When a runner approaches a piece of ICE, the corp has the choice to rez it, and have the runner encounter it, or not rez it, and then the runner does not encounter it. Not rezzing it is avoiding confrontation.

En Passant, the card, allows the runner to interact with an opposing card after the corp opted to avoid a confrontation.

I am excited for what this means for future Reina cards. Very happy with Queen's Gambit. More chess terminology to follow? Will we see Castling? Forks? Pins? Fischerandom?!

If we do, think of me, because I will be excited.

(Intervention era)
Sanjay 3532
I did not know about that chess rule. Pretty cool. — quailman2101 1 Dec 2016
Hate to break it to you, but I don't think Reina's going to make it out alive from the upcoming rotation... I mean, it's GRNDL she was up against. — H0tl1ne 1 Dec 2016
Although I admit - that was a really good catch and a good review. Have my like! — H0tl1ne 1 Dec 2016
I saw Whizzard survive Boom! in the final at Worlds this year (thanks to Obelus and I think Plascrete). Maybe Reina will be fine? — Sanjay 2 Dec 2016
I was thinking something along the lines of Zugzwang, a runner card that made the corp choose between two not ideal situations. — Alist1 20 Jun 2017
Does swapping an ICE via Surfer count as passing it? — Vortilion 19 Oct 2018
7

Another ice destruction card for Anarch, nice! That wasn't sarcasm by the way, I genuinely love that that's one of the big Anarch "things," and I think this card is an excellent iteration of said thing. Because of the conditions necessary for its use, it costs zero creds, which is wild, considering those conditions are not hard to fulfill. You need to make a successful run this turn to use it? Big deal, you're a runner. You don't really have a choice. The only difficulty is making sure ice stay unrezzed, and there's plenty of ways to do that:

DDoS, installed the turn before, allows you to trash two, TWO ice for a three credit buy in. And you got some successful runs out of it to boot. Good stuff.

Run Amok and En Passant is a hilarious combo. Run Amok into their one iced server for free access (or the ice kill, either way is a win for you), and next click kill that same ice they were so keen on keeping installed. Talk about a one-two punch.

Emergency Shutdown and En Passant. Not the most graceful combo, but in case there's a big piece of ice you really need to destroy, this does the job very well. If said ice is installed on HQ, it gets even better, and requires one less run. I could definitely see some runners who don't care about tags using Account Siphon, then Emergency Shutdown, and then En Passant, which is a one-two punch with a sucker punch to the groin thrown in for good measure (the true Anarch way).

One thing to note, which only makes this card even stronger, is that the successful run you have to make DOES NOT need to be the same run in which you passed the unrezzed ice you want to destroy. So you can definitely get a free, easy run on Archives, then pass an ice on R&D, bounce off the ETR ice after that, and then En Passant. There's a lot of cool possibilities with this card.

(Intervention era)
Gerrark 187
How are you getting two ICE trashed in your DDoS example? En Passant only trashes one ICE, DDOS simply stops one being rezzed. . . . — The Broken Meeple 7 Nov 2016
Crescentus, anyone? — PureFlight 7 Nov 2016
@The Broken Meeple - DDOS turn 1, turn two make two runs on two different single iced servers, En Passanting after each run. — Gerrark 8 Nov 2016
Im confused as well Gerrark, the card says — TrungusWungus 9 Nov 2016
Sorry my comment cut off, I meant to say the card says "...during the last run you made this turn." So it would only apply to the LAST run? That means one ice right? If you made two runs on two different servers, it would only trash whichever one was the last one right? Not each run, but the last one. — TrungusWungus 9 Nov 2016
Assume you installed DDoS on a previous turn. At the start of your turn, you pop it. Click 1- Run. Click 2 - En Passant. Click 3 - Run. Click 4 - En Passant. 2 ICE for 1 DDoS, though it depends on you having 2 En Passant in hand. — Income Tax 9 Nov 2016
Ah right that's a bit misleading then if it requires you to have two copies in hand. Every card is "doubly good" if you have two copies. — The Broken Meeple 14 Nov 2016
1- get a bad pub 2- Wait for a big stacked server. 3-play : blackmail, en passant, en passant, en passant — Him 15 Nov 2016
This review skipped yet another powerful combo seen in a lot of runner decks. Valencia-Blackmail — iBreatheBullets 19 Nov 2016
4

Attack of the Birbs! Peck those sysops' eyes out!

I think that if a deck built around the Birds' derez abilities crops up (which from some of the Red Sands Cycle spoilers, looks like it might... assuming that people care about ice again at that point) then this would be a rather reasonable splash to make; as you can de-rez and trash a piece of ice with this, without giving them the opportunity to rez it again.

But to be honest, it's probably going to see more play with things like Blackmail and DDoS instead.

Flavorful card and fun to use. This card combine well with Run Amok and Tread Lightly, because those cards encourage the corp to not rez ices. You can then trash the unrezzed card right after.

At 2 influences, this can be used in any deck without too much problems. But, is it worth it?

For the corp, En Passant will cost them the and maybe the cost of placement (if the ice was stacked). For the runner, it cost only the use of the card (total of 2). Thus, this is not economic warfare, but rather a opportunity cost. Because it will lower the defense of the corp, especially if the corp has few ices.

This consideration is important. If you have a deck with less efficient breaker (Black Orchestra, MKUltra, Marjanah) being able to reduce the number of ices is important, since it cost you more to run through the ice than it cost the corp to rez the ice. If you want to penalise the corp, trashing a rezzed ice is better, because on top of the opportunity cost, you add the rez cost of the ice (by it you have to break that ice).

Best scenario : use Run Amok and face check the second ice of the server. Stop the run, trash that ice and then trash the first unrezzed ice.

En Passant is a fun trick to use because it often catch the corp by surprise and penalise the corp for not rezzing everything.

Art, name and quote are all in sync and wonderful. Fun card.

Note that En Passant requires a successful run to use; that makes it a bit harder to fire. However, the successful run doesn't have to be on the same server as the ICE you're trashing (you can make a successful run on Archives or somewhere, then a failed run, then trash unrezzed ICE you passed on the failed run).

The card is certainly fun and flavourfull. One thing kind of missing from the analysis is the kind of ICE you are trashing. Most corp players put only a limited copy of expensive ICE in their deck. In this regard you can use a low credit window to snipe a powerfull piece of ICE that the corp has to dig for an adequate replacement. If you are brave with facechecks (which you should be if the corp is low on credits) you can test the waters and get rid of a Tollbooth, DNA tracker or Anansi. Even the if it is replaced with another ICE after the chances of it being another scary one is lowered. I have found that one ICE centrals tend to be a good indication of a worthy target.

Thank you @callforjudgement, that nuance escaped me. Also, @Aterriblesound, therein lie the drawback of En Passant, you do not know what you are trashing, unless you use Deuces Wild or Spot the Prey. It is possible to make an educated guess, according to which card we see in HQ, R&D and ices that have been rezzed, but that is all. Trashing a Tollbooth is much more valuable than trashing a Tithe, for sure. You are completely correct about once ice centrals. Thanks for the comments.