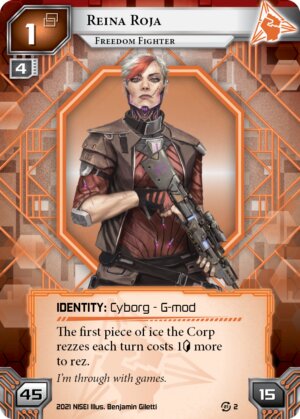 The first piece of ice the Corp rezzes each turn costs 1credit more to rez.

I'm through with games.
Illustrated by Benjamin Giletti
Decklists with this card

Red Queen of the IRS

Reina Roja: Freedom Fighter (NOTE: Reina Roja in Spanish it means the "Red Queen") reigns supreme as the most directly corp-taxing ID currently available. As an Anarch she has quite a few tools at her disposal (perhaps with some help from the criminals) to mess with the corps servers and credit pool. Let's take a look!

Tax by using corp's ice with Reina Roja: Freedom Fighter's ability adding 1 to an ice-rez each turn, with a strategy to bankrupt the corp, the cost of each rez-ing ice in itself is a combo that bears note

Tag-Me Tax: Account Siphon (borrowed from Criminals) combos are commonly included in many Anarch decks because it helps in two important ways: 1 it taxes the corp up to 5 each time it is used, secondly it can provide significant economy to the runner which is often an Anarch weakness anyway. Such synergy often comes at a price, in this case it comes in the form of tags. Putting pressure on the runner to pursue a tag-me strategy, where the gamble is to keep the corp poor so as to minimize whatever damage the tags can cause. One option to turn that tag into a benefit is to Data Leak Reversal where a poor corp may feel the pressure to trash Data Leak Reversal rather than pursue other options with such limited & resources.

Lamprey tax: make those runs on HQ punish the corp even more

Chess Tax: What's better than a 1 tax? Even more! With 3 copies of Rook installed on a server in combo with Reina Roja: Freedom Fighter can potentially tax the corp 7 extra in a single run on top of the stated rez cost for each of the 3 pieces of ice. One strategy is to run on remotes encouraging the corp to rez such ice at a greater cost bankrupting the corp, then having free reign in the central servers protected by un-rezzed ice pumping up Medium Datasucker Nerve Agent, and/or using Keyhole & Imp etc etc.

Vamp tax: Having an ice-breaker suite that can reliably get through HQ in combo with Vamp provides yet more opportunities for the runner to keep the corps economy at or near 0

Taxing by trashing/de-rezzing ice: similarly once the corp has invested in a piece of ice it hurts tempo & economy to subsequently loose that investment through trashing or de-rezing. The following are examples of cards that offer such an opportunity: Parasite, Emergency Shutdown, Immolation Script, Crescentus etc

Tax assisted by ice-breakers A number of the combos above depend on the runner being able to get through ice when the corp is able to rez it (albeit at a higher price), for this reason AI ice-breakers like Eater for example, making a successful run can sometimes be more important (for virus pumping or enabling taxing combos) than accessing cards. (Note: many other AI icebreakers can potentially be useful too like Knight, Crypsis, Overmind etc)

Recursion assisted tax: many of the combos above can have even more life when assisted by recursion events such as Déjà Vu or Same Old Thing etc

Can potentially allow runner to tax corp from turn 1 and each turn for the rest of the game throwing off the corp off financially potentially giving Reina Roja: Freedom Fighter free reign through servers

Many corp taxing combos available including

+1 also taxes corp during each trace

Focusing on taxing the corp can possible incur tags which in turn open the runner up to a host of trouble chiefly Closed Accounts, Scorched Earth & Psychographics etc.

Unlike some ID's which concur a clear economic edge, adding to corp rez-cost doesn't necessarily add anything to the runner's bottom line. As an Anarch Reina Roja: Freedom Fighter has a bit more of a challenge putting an economy together.

I like Reina Roja: Freedom Fighter, putting her in a deck that taxes the corp mercilessly can certainly be fun, but with fun there is always risk! See Anatomy of Anarchy for a really nice write-up on how to build a heavy-corp tax deck that has seen success.

(Data and Destiny era)
chris_walker 650
At one point (around the release of O&C, Reina lock decks had Lamprey as a way to keep the Corp poor after Account Siphon. Very brutal if the Corp lacks Beanstalk or some other low startup econ. — LynxMegaCorp 6 Dec 2015
Thanks Lynx Kuroneko, Lamprey has been added! — chris_walker 6 Dec 2015
2

Since the excellent review of chris_walker is now 5 years old, I will revisit this ID.

Reina Roja is a mid tier ID. The link and the ability will always be of use. You will not have to do anything special to get it to fire. Reina will allow the runner to put early pressure on the corp. After the corp rez the first ice, it will be unlikely that the corp can rez the second ice.

The reason to use Reina is to do some econ warfare. With Anarch tools, it generally involve using ice trashing tools, like Run Amok and Hippo. The corp will rez, paying +1 cred and then get their ice trashed, making it matter only once. If you wish to make matter worse, go for Xanadu and make the corp pay +2 creds.

There are 3 additional tools for econ pressure in Anarch : Lamprey, Hijacked Router and Mining Accident.

Reina synergize well with Criminal tools. Diversion of Fund put a great pressure on the econ of the corp. Hernando Cortez will make the cost of rezzing an ice even worse. For example, it would cost 8 creds to rez Spiderweb, instead of 4!

If you play criminal, it will be worth it to use Reina on DJ Fenris, to get a link and to make the corp pay +1 cred to rez an ice.

Another tool that pairs well with Reina is Flip Switch. Letting you facecheck, costing the corp an additional cred and not facing any consequences.

Only Edward Kim, in Anarch, has 1 link. That link can be used for many many things. It is very good to have that link. Making trace less hurtful and letting you use trace tools in a more efficient way.

And finally, let face it, in every variation of the art for Reina Roja, she is always the most iconic runner of Netrunner.

I don't think DJ Fenris can give you link.