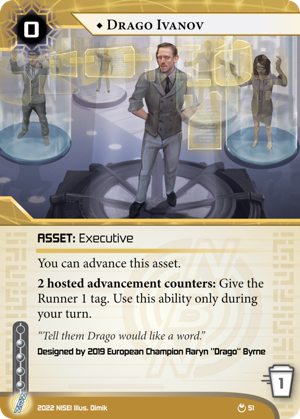 2 hosted advancement counters: Give the Runner 1 tag. Use this ability only during your turn.

"Tell them Drago would like a word."
<strong>Designed by 2019 European Champion Aaryn "Drago" Byrne</strong>
Illustrated by Dimik
Decklists with this card

This cards reminds me the good old days VS Bio Ethics Prison decks.

Back then, draw, draw, cant do anything. Concede.

Well yes you can still draw or remove a tag for turns again and again to find a chance against them...

But it's just still too boring.

So, caveat: I haven't had a chance to pop this guy into a deck and play with him yet. But just at first blush, this card looks really interesting, and I want to talk a little about why I think that. And wow, as I proofread before posting, apparently I had a lot to talk about! Sorry in advance for the wall of text. Let's dig in to Drago, and some of his implications!

So first - the big one: Drago makes a whole lot of tag-punishment cards a whole lot more playable. Normally, if the runner plays carefully, they can be safe. Tag punishment is often more about the threat - the punishment never actually lands, but the danger forces the runner to play more slowly and carefully, which gives the corp more time and breathing room. It's usually pretty binary - as long as the runner avoids ending their turn with tags, they are safe. And if they ever DO end their turn with tags, it's usually ruinous enough to end the game. So it's almost more of a tax - the runner just has to be extra super careful once they know the corp has tags, and make sure they have enough cash around to beat Hard-Hitting News, or keep a Misdirection on hand, etc.

Not so when Drago is in da house! It used to be that tags only happened during runs, or sometimes from corp events that could only be played after runs. Runners who stayed home and worked on their econ or rig were safe! But not any more. Now, the corp can just force tags into the game, whenever they like!

Obviously the dream is getting enough advancement to give the runner two tags, and BOOM! to end the game. Possible, but challenging. Since BOOM! requires to play, you need to start your turn with at least 3 advancement tokens on Drago for this to work. (So you can advance, apply tags, and then BOOM.) Tempting, but probably not practical. But without the big killshot, the other possibilities are impressive.

Unlike BOOM!, there are a lot of punishment cards that only require one tag. They didn't used to see much play, because again, runners are usually pretty good at clearing tags, and it wasn't worth putting in cards that required difficult conditions and didn't win the game outright.

But now, as corp, if you can start a turn with Drago installed, you can spend two clicks advancing him, give the runner a tag, and then play something nasty. Some potential options:

Retribution in particular seems especially promising, since it gives you the option to snipe some key pieces from the runner's rig, potentially blocking them from getting in to trash Drago next turn. (Which they'll probably want to, now that he's rezzed and threatening them with more unavoidable tags+punishment.) Simulchip means that program trashing may not be as devastating as we'd like, but trashing an expensive console can be almost as good, especially if it runs them out of memory. And it would probably make the runner very sad, for example, if something unexpected happened to their nice shiny new boat...

I started out thinking this card was amazing-good, but the more I think about it, the more I like the design. The fact that he takes two advancement tokens per tag makes a lot of the math work out nicely. You can't install, tag the runner, and play tag punishment in one turn, since you have to spend loading him up. So he has to spend at least one turn on the board. On the other hand, if he survives a turn on the board, you can advance him enough to play tag punishment in one turn. (and play it) And, of course, NBN has been getting some nice ways to advance things without spending clicks lately, like Pravdivost Consulting: Political Solutions, or Vasilisa. (Yes I know she's just a reprinted Matrix Analyzer, but she's a slightly upgraded Matrix Analyzer that no longer requires a trace!)

The biggest downside of Drago is, of course, his influence. (Or alternately, that a lot of the good tag-punishment cards are in Weyland, and also have high influence.) The more I look through cards, the more I think he might do better there. In addition to good tag-punishment options, they have some of the best ways to load up a card with advancement tokens quickly. We just lost Dedication Ceremony to rotation, (which would have obviously been amazing (read: broken) on Drago) but we still have our good janky friend Jemison Astronautics, if we want to chase that seductive dream of a surprise BOOM! out of nowhere...

One last thing. Can anyone tell me what's going on with the art in this card? Are those like, holographic images, while he goes over peoples' psychographic profiles? Are those his coworkers? Or does he just decorate his office/work environment with live people trapped in mad-science tubes?

I expect this guy will be banned very soon.

Glad to see tagging being powerful again, but this card seems pretty overtuned, and I imagine some decks will even build around it out-of-faction.

It's 1 credit to trash. I think Bwob is right that the math works out. It encourages runners to play more aggressive and/or run clickless tag removal.

This with Seamless Launch and BOOM! is pretty evil if you pull it of. Which can be as early as turn three in the right circumstances.

The power of this asset is amazing. Probably the most powerful NBN asset.

In NBN: Reality Plus, it is just phenomenal, because you gain back the credit you put for advancing it, while still having a click to use cards like The All-Seeing I or Backroom Machinations.

This combo well with BOOM!, since it does not require an inteaction with the runner.

It makes any tag punishment card much more playable. Rig shooting, with Retribution, become much more easy to pull off. Even Market Forces becomes a viable tag punishment.

Of course, there are cards to help protect against it, No Free Lunch, No One Home and On the Lam can directly protect from the out of turn tag. And Pinhole Threading can help the runner get to it more easily. But all those tech are in the Criminal faction.

The power of the card comes from the fact that it require no interaction with the corp. Like Clearinghouse, it incentize runner to go and check the remote, unless they be faced with a card that can cause them a lot of grief. In this aspect, it is a great card for the game.

If the corp is playing any tag punishment cards, it should probably have Drago Ivanov.

The art is a bit strange, but still evocative. The quote is the best and goes very well with what the card does. Drago would like a word with you, tag! Haha!