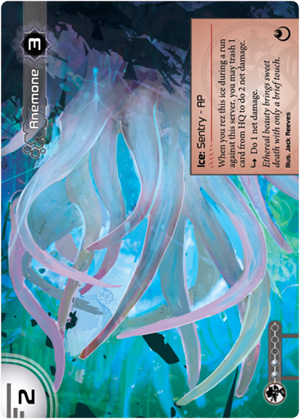 When you rez this ice during a run against this server, you may trash 1 card from HQ to do 2 net damage.

Ethereal beauty brings sweet death with only a brief touch.
Illustrated by Jack Reeves
Decklists with this card

I think this card is likely underrated. Granted it isn't a powerhouse by any means, and NISEI has said that they plan to generally reduce the power of ice from here on out.

But I think this card has an effect that is very rarely seen: guaranteed net damage mid-run. Aside from specific damage prevention cards like Caldera or padding like Aniccam (note we are losing I've Had Worse, Sports Hopper, and Guru Davinder when Midnight Sun is released), the runner is guaranteed to take 2 net damage when this card is rezzed, no matter how many credits or breakers they have.

Other common cards that can cause damage mid-run (outside of accessing an Urtica Cipher or Snare!) are Ben Musashi and Hokusai Grid. But Anemone adds another layer of calculus to how safe a server is, outside of the server's root. If there is an unrezzed ice in front of a remote, it could now require SIX cards to steal Obokata Protocol, or stealing a Sting! could now be part of a run that deals up to 5 non-optional damage at once, just from one unrezzed ice.

When to rez Anemone is an interesting decision for the Corp, I think, and also presents some interesting decisions to the Runner. If the Corp suddenly chooses to rez an Anenome, what are they thinking? Is this advanced card actually an Urtica Cipher and not a Nisei MK II? Should I jack out?

I think it will be interesting to see how Jinteki evolves when Midnight Sun is released in full, and if they get some of the pep back in their step that they very much need. I hope that in the meantime, Anemone will be a fun addition to their mind-game arsenal.

Here to confirm as an update: it is fairly common that a runner with tons of cash and all their breakers out runs with one card in hand and just loses the game. Fun card!

Terrible. If you're not already playing Mganga, I'd leave this one in the jankpile.

Jinteki: "We remember failed ideas, but do not carry them forward." Also Jinteki: "Let's carry forward Mganga's one-time ~2 net damage into an overpriced version of Tithe most runners will break for $1 and Bukhgalter will break for $0."

To start with: this ice has virtually zero long-term value in most matchups. Aside from Anarchs, every other killer and Amaukua break this for $0-1. Without the ability, this would be a bad ice at a cost of $0. (Ignoring its net damage for a moment, $0 Pop-Up Window causes a larger credit swing than this ice in most matchups). If you're thinking about this ice, its role is mostly the short-term net damage. It's a costly way of dealing 2 net damage, but you have to wait for a tight window of opportunity where they're running on the server and the net damage would actually be meaningful. The timing on using this ice is going to be super-funky, Anemone is usually a one-shot ice which virtually ignores whether the runner has a breaker, so Anemone will probably be a weak option early compared to Aiki/Saisentan/etc and 2-3 net damage is unlikely to set up early kills. It could be useful late-game for getting a few net damage in after your other ices can reliably be broken. If your Kakugos and Aikis have successfully wrecked their stack and they're low on cards, 2 net damage might be very meaningful. It is a very cumbersome way of closing out a game and a sad early draw though. Jinteki is the least able to afford inefficient ice and cards which you have to sit on forever, and this card is nothing but inefficient on a good day and VERY sensitive on when it can be used effectively.

This ice is not very promising in low commitment setups. Including a few of these in your deck in the hopes they might screw up a run on Obokata, well, you could have used a much better card like Anoetic Void and ended any run with some upshot around threatening to end a second run later. The only economically viable reason to use an ice with a rez:break cost ratio this terrible is to set up funky kills. This exists in the Brainstorm space where you're only using this high-commitment, something you're building around as a win condition. Like Brainstorm, it's not a good win condition but it will be memorable when it happens. Surat City Grid could generate 6 net damage suddenly if the runner runs into a server with 3 unrezzed Anemones. Surat might be able to generate some kills with 2 Anemones (possibly after a Kakugo) but this is a lot of variables. In imports, if you were building around net damage, I could see this working as a way to kill a runner who's already taken multiple brain damage, but that's a really hard condition to pull off in the current card pool. (If HB gets a viable brain damage agenda, like one that requires a brain damage as a cost to steal or a 3/2 which causes a brain damage upon being scored, maybe revisit Anemone then).

Jinteki ice urgently needs a rework. We're flooded in forgettable net damage at this point. Can we try anything else? For example, maybe showing the corp the top few cards of R+D (maybe with an Anansi-like rearranging), turning a runner card facedown for a turn, destroying a non-virtual resource (probably not the first time someone coded a bioweapon for DJ Fenris, let's be honest), or trashing a non-program card out of the runner's faction or moving a card to the top of the stack. Steve has a cool ID ability where the runner picks 2 cards from the heap and the corp picks which one the runner gets to keep. Maybe a Jinteki ice could have the runner choose 2 or 3 cards from their hand and the corp chooses 1 to trash? (The Steve-like selection helps reduce the chance that a runner takes a devastating hit like losing a breaker and is more strategically interesting than random net damage).

Well, you have that with Engram Flus. And I don't think this is that bad

Engram Flush can snipe critical cards like a breaker or Apocalypse. In the spirit of encouraging runners to run early, the Steve-like version is less likely to hit a crippling card.

This ice will be a favorite for the grinder archetype (usually with Jinteki: Personal Evolution).

Unlike Chrysalis, it is not an ambush. BUT, it nearly always work! Giving 2 net damage will make any runners jack-out, if they did not have a full hand. It will also protect the corp from getting its Obokata Protocol stole (usually).

While it cost a bit more than Mganga (on same cost, if you bidded 2), it will do its damage, because it is a rez effect that cannot be avoided by breaking the ice with an AI breaker or by bypassing the ice.

Out of faction, it can cause a surprise kill (unlikely). At 2 influence, it will pull its weight in a grinder ID like Weyland Consortium: Builder of Nations.

A good ice in faction, because of Obokata Protocol.

The art is well done, but rather tame, for what the ice does. The quote, however, is amazing.