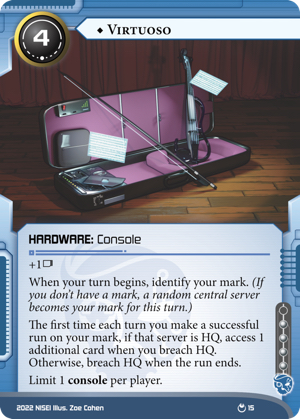 When your turn begins, identify your mark. (If you don’t have a mark, a random central server becomes your mark for this turn.)

The first time each turn you make a successful run on your mark, if that server is HQ, access 1 additional card when you breach HQ. Otherwise, breach HQ when the run ends.

Cool card thematically, and it theoretically provides a mark-based wincon by giving you extra central accesses. How sick is it that we have a violin console? Unfortunately, for how fun the card is, Virtuoso is equally, at least in my humble opinion, really damn bad. So bad in fact that I have believed, and still believe, that Virtuoso is the worst runner card in Midnight Sun. Nonetheless, it's worth discussing the card's strengths and weaknesses.

Basically, the appeal of Virtuoso is that it applies bonus pressure on all central servers, including archives. The corp will have to respect the built-in Sneakdoor Beta, and they will have to be aware that singles off R&D may also snipe some key cards out of HQ. This pressure certainly isn't nothing.

However, the strengths of Virtuoso end there. The first weakness is that these advantages aren't even strong. Although we may fantasize about getting archives mark, then smacking HQ in the liver, the reality is that with mark being random, and the triggers being once per turn, the effects are so inconsistent, and the single accesses so inconsequential that you essentially have no pressure at all. I'd go as far as to say that this weakness of mark dependency alone kills the card. This weakness is just not defensible on a 4 credit console.

The second critical weakness of Virtuoso is that it kills your aggression. It's a very common misconception that central accesses=aggression, when in reality it's only a fraction of the pie. The more important part of aggression is that you keep up in econ against the corp in doing so. Maybe you have an Aumakua that's charging up. Oh boy, the corp has to deal with your central pressure now. What about Paragon? Every run they let through is value they're giving you. What about Virtuoso? Well, you just spent 4 credits on something that cannot deal with ice or win in the econ war, so the corp can freely handle the situation however they want. As a corp, in 80% of cases I'd be fine giving the runner a free Virtuoso run on archives, because it simply doesn't help them. A myth we should probably stop telling new players is "run early, run often." Getting singles, or even doubles in the early game without getting econ in the meanwhile is really, really bad for the runner and a very common reason for runner losses, particularly in startup. You may think this problem applies to The Twinning as well, which is currently a meta-defining card, but Twinning does not share Virtuoso's other weaknesses.

Incidental HQ accesses simply suck. Mass HQ accessing can be strong to immediately give you information on the state of the game while also seeing any agendas there. However, if we're getting incidental HQ accesses, the corp has flexibility in controlling the value of anything Virtuoso does. Again, you spent 4 credits on an inconsistent Docklands Pass+worse Sneakdoor Beta, so you're putting yourself behind and giving the corp initiative. If they just jam the remote, it's harder for you to contest because you lost out on 4 credits and also any other money you lost by making Virtuoso runs. Virtuoso also gives very little if agendas have been filtered from HQ. This is not to mention losing Pennyshaver money.

And that's the other weakness. Virtuoso is a console. That means you're not playing Pennyshaver or Paragon, and why on Earth would you put Virtuoso in the same deck as these other consoles? A non-console, no MU Virtuoso at a discount would be more enticing. A card like Docklands Pass simply isn't something you want to install every game. If Docklands Pass was a 3 credit console with 1 MU, it would be unplayable. You don't want to tie down your console slot with something like Virtuoso.

Finally, Virtuoso is absolutely horrid in situations where you need to pull through the most. You lose out on something like 15 Pennyshaver credits on average. You better hope that these credits you don't have are saving you, but Virtuoso really can't pull this weight. Corp has Audacity in hand? Well, screw you, you have Virtuoso. You're going to be seeing some random ice they don't plan on installing for the next 3 turns. Need to trash Boom? Screw you, you have Virtuoso. You only get to see 1 extra card. Have fun dying. Maybe if you had 16 more credits, you'd be able to run HQ more times and trash the Boom. Maybe you wouldn't even have gotten HHN'd. You expect a 4 credit console like Virtuoso, that has no economic output, to be able to do something when it matters. It doesn't. Even Carnivore, which is rightfully called out for being bad, has better odds of saving the game. If you need to trash something from HQ, it will do it, no matter if you get purged or not. If you need to trash SanSan City Grid but have no credits, Carnivore will save you. Even with these benefits, Carnivore is at least as bad as Virtuoso, because, like Virtuoso, it's just not useful in most situations.

Look, maybe this reads as unfair, but Virtuoso really is this weak. The console slot is the most contested slot in the deck. Virtuoso can't keep you in the game because it's not Pennyshaver, and it can't close the game either. Virtuoso is carried more by criminal being strong than itself being a useful card at all. So why are you playing it? Truthfully, some cards are very bad for winning the game, but are fun because they're flashy and unique. It is for this reason that I like to play Virtuoso myself: Simply no other card is an instrument, or incentivizes you so much to run specifically your mark. If you just want to play with mark, Virtuoso is the only place to look, and I can't help but love it for that.

No, the run is only considered successful for the marked server. You will skip to the breach phase of HQ meaning it will not count as being successful run. You would need to also run HQ in order to play Deep Dive.

This is a fun console, but not by itself. It is a combo console. Otherwise, it is rather weak.

Considering that is breach HQ, it should combo with Docklands Pass. For Sable, this means getting a clickless access to HQ just by running her mark. This makes the mechanics related to the mark much more valuable.

But other ID might get value from it. Zahya will make 1 at least for even a run on Archive and Steve can trigger his ID from a run on any centrals. I'm not sure if a breach on HQ constitute a run on HQ. If it does, then this console would combo well with PAN-Weave also.

But it gets better. When using multiaccess cards, like Jailbreak, you can now see even more cards (but always in HQ). Seeing this console force the corp to protect every centrals.

Of course, the price for this is 4, which is rather steep. When you compare this to Paragon or Pennyshaver, it is hard to rate Virtuoso very high. However, it is a console that gives you the opportunity to see more cards than you would normally, and you win the game by getting access to as much corp cards as possible. So while it might not be the best console (mainly because of its price), it is a console that could go in any criminal deck.

Criminals makes runs as often as possible. Often, they can make their runs cheap by using tools like Inside Job and Boomerang. Getting a simple multiaccess tools that gives them +1 MU is good. It has the price of a Docklands Pass coupled with T400 Memory Diamond. If you want the great combo, try it out with The Twinning.

Finally, violin music is my favorite and this is a fine violin. The art is well drawn and well constrasted.

I think it doesn't combo with Steve since also this breach occurs when the run ends. With Zahya I'm not sure but I think it does count as an extra access either in HQ or R&D if you did run there. (both Virtuoso and Zahya triggers at the same time, so you can trigger first Virtuoso and then Zahya since Zahya doesn't care where are the cards that you access from)