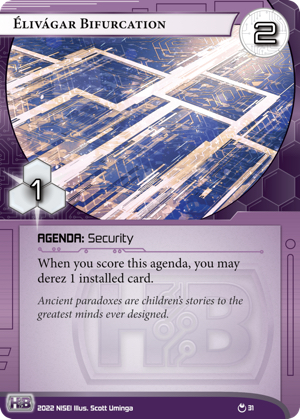 When you score this agenda, you may derez 1 installed card.

Ancient paradoxes are children's stories to the greatest minds ever designed.
Illustrated by Scott Uminga
Decklists with this card

I think this card is very shrewd. Derezzing doesn't create a lot of value, and this card is priced accordingly. Bifurcation is a 2/1 agenda very playable even if you don't plan on using the derez effect. In contrast, a card like Hakarl is completely unplayable unless you value derez effects highly.

If you were going to print HB's first 2/1 agenda this is probably the best way to test the waters. A blank 2/1 will probably be better than a low-impact 3/1 like Hyperloop Extension, and those are either currently (or at least recently) tournament-viable in Sportsmetal.

(If an operation was printed for derezzing a single card, I think a $0 card "Derez an installed card and gain $2" is fairly priced).

Think of the Magnet value! Or maybe other ice that has an on-rez effect. Otherwise just neat to see de-rez getting some focus. And as far as 2/1 agendas go there are certainly ones with more downsides.

Something not touched on in the other reviews is how a 2/1 in purple helps fire HB's "When an agenda is scored" IDs, Precision Design and Sportsmetal.

In Precision Design this agenda is 3 & 2 to recur a card from archives and score 1 point. That's pretty good - in rush decks that want to recur combo pieces like Biotic Labor, this is slower and more expensive than an Archived Memories, but keeps pressure on the runner by increasing the corp's score and is generally quite tempo-positive. It is worth considering that whatever you just recurred from archives is open to being Imp'd from your hand before you get a chance to actually use it (unlike a 1st- Archived Memories) - but this is a minor drawback and combo decks that are already running Archived Memories would likely benefit from the additional recursion.

In a Sportsmetal rush deck, this is arguably even better. 3 & 2 for 1 point and 2 cards is akin to a bite-size version of the huge tempo boost offered by the ubiquitous Offworld Office, largely reinvesting the clicks spent scoring the card out. If you were planning to spend 2 drawing cards already (something that rush decks might do when assembling combo pieces) this now equates to ",2: gain 1 point" in Sports. Sports also already want to run lots of 1-point-or-less agendas as food for cards like Fast Break, Giordano Memorial Field and the late Game Changer, so this is right at home.

Of course, these effects are nothing new - they apply to any agenda played in the above Identities... but the possibility of being able to score Élivágar Bifurcation from hand with no combo pieces or setup required makes these effects a lot more reliable... barring any blocked datafeeds. I can see this becoming an auto-include in PD and Sports decks of the future.

In Weyland this is a common pattern for corps on SDS Drone Deployment. Their plan is usually to score one Hostile Takeover and jam SDS.

A difference though is, Haas Bioroid already has a lot of access to fast advance tools -- it's not like they couldn't easily score 1 point from hand if they really wanted to before. But, maybe they can use the Biotic Labor and Bass CH1R180G4 slots in some other way now.

There were a lot of comments on Hákarl 1.0 about how to use the derez effect profitably:

Those comments considered the midnight sun booster pack. But in the full midnight sun, there are a few other interactions worth noting:

The way I imagine this agenda being useful is something like:

The Élivágar Bifurcation is helpful because, even if they steal both, the runner steal needs to steal at least two 3 pointers to win. And you don't need to pack Biotic Labor or spend money on Biotic Labor, you can use those slots for Big Deal instead.