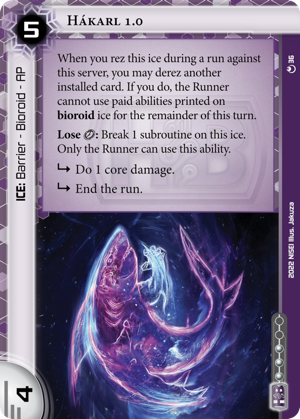 When you rez this ice during a run against this server, you may derez another installed card. If you do, the Runner cannot use paid abilities printed on bioroid ice for the remainder of this turn.

Illustrated by Jakuza
Decklists with this card

You better have a good target to derez. If you compare this to Eli 1.0, you are paying an extra 2 credits for its rez ability, and that's not a small fee. Sure, you have a better chance to land a brain damage and end a run, but if that's your main reason to play Hákarl, there's a few problem with it:

So therefore, you are not playing Hákarl for its subroutines; you are playing for its wombo-combo potential. For example, you can derez:

But the big question is: Is this worth an extra 2 credits over Eli 1.0? So far, there's not a lot of good use of this card, so I'm hoping this will change once the entire Midnight Sun set is released.

Hmm. So on the face of it, it's a more expensive Eli 1.0, that is nastier to face check. Not great, but sure, whatever. And it comes with a free way to renew your Nico Campaign. Great. Sometimes you might be able to use the ability to prevent the runner from clicking through something, if you know in advance that they're planning to click through. But mostly, it seems only really useful as one more bioroid if you need to pad out the numbers in your Architects of Tomorrow deck.

That's the basic review, and that's how this card is going to be for most decks. The end.

Now let's talk about the few decks where it can be something more.

So again. By itself this card is pretty boring. But where it gets interesting, is when you consider it along side another card from the same set, Trieste Model Bioroids. Consider the following scenario:

Janky? Yes. A two-card combo to score out agendas. I mean, it's not awful, but there are some holes in it. But we can do better!

First off, we probably want a second piece of ice past Hákarl 1.0, to catch Inside Job. If it's a bioroid ice, (and we're using Architects of Tomorrow) then we even get a discount on rezzing Hákarl 1.0. (Which we probably want, since 5 is a lot!)

Since Hákarl 1.0 can only use it's "cool" ability when rezzed, we could also benefit from some ways to derez our own stuff. Élivágar Bifurcation might actually be useful here, for incidental points as well as reusing Hákarl 1.0. And of course, Hákarl 1.0 itself can derez, so if we want to get super janky (read: probably never happen in a real game) we can have two servers with Hákarl 1.0, and alternate between them, letting them derez each other. (Slightly more practical, you could try scoring in a server that Trieste is not protecting, and then use Hákarl 1.0 to derez Trieste so you can retarget her at the Hákarl 1.0 as a surprise!

Is this practical? Probably not. You'd basically need to dedicate a fair amount of deckspace to this combo. And HB has other, more reliable ways to score agendas. And really, I think Trieste Model Bioroids is doing most of the heavy lifting - A lot of times you wouldn't even need Hákarl 1.0, and it's just overkill. Trieste Model Bioroids is also the vulnerable point in this combo - you need a different server to host Trieste, and if they go trash her, your combo is over.

The other thing you'd need to watch out for would be ICE destruction. That's one of the few ways I can think of that the runner could get around it once the full combo is online. Also bypass of course, but Inside Job can be blocked via extra ICE, and Femme Fatale is pretty expensive and not so common these days.

Anyway! A fun new option for glacier builds. I don't think they will be tournament winners, but I bet we see at least a few fun combos with this! And if you're not building ridiculously impractical combos, what is even the point of netrunner?

This card is a $2 premium over an already mediocre Eli 1.0. The only on-rez effects which might be worth considering at a $2 premium are Regolith Mining License and super-janky Anemone, but nobody is less able to spend $5 and 3 influence on flimsy ice than an Anemone player.

Even if there were an on-rez effect worth a $2 premium, the timing for when you might want to derez something is very limited and an ice will never be the most reliable way to deliver a derez on demand. If derezzing ever becomes a thing, Divert Power does it a lot better than Hakarl. Divert Power can derez multiple cards, it can give you a powerful ice at a discount, and is much more efficient on $ and influence.

It is hilarious to me, seeing the words " an already mediocre Eli 1.0", when Eli had such a huge effect on the meta for so long. It was one of the founding members of the MWL restricted cards list, for goodness sake, and even with modern fracters, it's still one of the most taxing pieces of ice for its rez cost.

Eli used to be very good! But it's only the 30th most used ice according to Know the Meta (in 6% of corp decks). Mediocre sounds about right to me. Sometimes cards change in context, for example an expensive 0-strength ice like Endless EULA has seen periods where it was extremely hard to slot (e.g. it died instantly to Parasite). But this previously-not-very-good EULA is now used 2x as often as Eli presumably because it holds up well against Endurance. It is theoretically possible that some magnificently powerful on-rez effect will be printed which makes Hakarl playable, but if Eli is rarely used at $3 for a 4-strength 2-sub barrier, Hakarl needs a LOT of environmental help to compensate for its grim numbers.