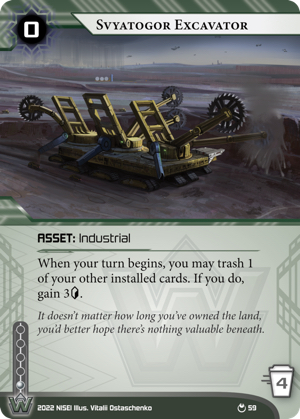 It doesn't matter how long you've owned the land, you'd better hope there's nothing valuable beneath.
Illustrated by Vitalii Ostaschenko
Decklists with this card

Anyway, I really wanted to talk about this card, because in Ob, it's far more than corp Aesop's Pawnshop. The amount of value this card allows you to tap into and the number of wild things it allows you to do is simply unreal.

Pawnshop is usually going to give you 3 credits per card. In Ob, this is not the case. Sometimes, you will have a gearcheck such as Afshar outlive its usefulness on your remote server. Instead of allowing Amina to tax you a credit every turn, you can blow up your own Afshar and pull out a value card like Marilyn Campaign. We spent 3 credits on Afshar, got 3 credits from Excavator, and we will now get a bonus 9 credits if Excavator blows up Marilyn before the last 2 credits are taken. This is before the second Ob trigger enters the equation, so it's likely that this act of Afshar mining nets us even more than 9 credits of value overall.

We can take this even further if we have higher cost ice and wish to ride the mine down. You shouldn't be running Ballista in your deck, which is why you shouldn't feel bad about mining 15 credits from it down to Spin Doctor.

If you construct your Ob deck correctly, you'll pretty much be able to search anything you want at will as long as you keep firing Excavator. Need MCA Austerity Policy? Blow up your own Whitespace. Don't have Whitespace? Blow up your own Akhet. Don't have Border Control to find Akhet? Well, Mausolus does the job if you have Excavator. We use Excavator to dig through the entire cost range and find the one card we need while making 9 credits. Fun stuff.

Aside from searching for wincons like MCA, tech cards like Crisium Grid and Mavirus are but an Excavator trigger on Mausolus away. Of course, this isn't free, because we did lose a valuable ice, but having this option is powerful.

One major advantage Excavator has over Extract is that it's clickless. You may go, "Hm, Hoshiko doesn't have a decoder, but she has a fracter and killer ready to go. I can install this 5/3 and get ready to score it next turn, but I need a code gate." Well, Excavator has got you covered! Find that code gate, and slap down your 5/3 fearlessly using the clickless install+search that Excavator has given you. Maybe you want to score 4/2 agendas instead. Teh, isn't Excavator useless here? Heck no, install+advance, then use your spare click to Hard-Hitting News. There's just so much value in having this extra clickless install.

Daily Business Show prevents the runner from locking you by fetching singles from the top. It turns out that Excavator does basically the same thing, except it gains you money instead of filtering. This is pretty silly. It doesn't matter if you've been hit with The Maker's Eye. Excavator will allow you to repeatedly shuffle your deck before your draw step and see fresh cards. The fact that you permanently have the ability to draw fresh cards is quite new to Weyland, to say the least. There's no way for the runner to delay you from finding your agendas: When this is in a remote, you just shuffle every time the runner fetches a single. Excavator is cheaper than DBS, makes you money to protect the agendas you draw, and totally hides any information about what you could possibly be drawing. Hilarious.

4) GETTING IT INTO THE BIN

Now this is something that requires much more experimentation, and I don't believe that it will be any good. However, sometimes we simply want a card to get into Archives from HQ. In Weyland, this would be getting Archer into the archives and cheating it out with the new Trust Operation. Trust Operation only works on cards in archives, but overdrawing Archer to discard it is some wasted value. Why not get that bit of extra value from Excavator? Install that Archer on archives to dissuade Dirty Laundry for a turn, blow it up with Excavator, then you're good to go!

Anyway, Excavator and Ob aren't necessarily broken, but the number of options that this one card opens for Ob is simply mind-blowing. I'm very impressed that NISEI has managed to design something like this in a game like Netrunner that sometimes feels overly-structured, even if it may end up being banworthy in the future.