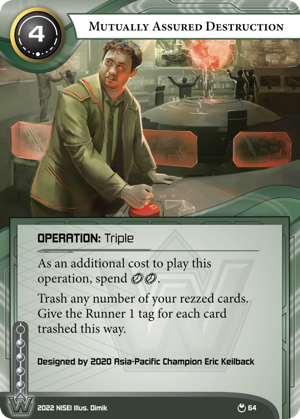 Trash any number of your rezzed cards. Give the Runner 1 tag for each card trashed this way.

This card is very powerful. Without requiring a cheap-to-trash asset to stick, such as in the case of Drago Ivanov, you have the non-terminal ability to flood the Runner with tags. Generally speaking, you want to be using MAD to win the game immediately, if not the same turn. This is because if anything should happen that would delay your win, such as Misdirection, Clot, or BOOM! and Project Beale getting found in HQ, then you can lose the game on the spot. You don't expect to win a game where you've spent 4 credits, lost a turn, and blown up your board for essentially no gain besides landing tags that you can't use.

As such, our goal is to play this card in Ob and find a way to get an extra two clicks so that we can play Boom in the same turn. There are two main setups that you'll see.

Use Svyatogor Excavator on a 4 cost card to find Bass CH1R180G4. Play Biotic Labor, then click Bass. We now have 5 clicks. Play MAD on any two rezzed cards, then murder the Runner. In terms of only the pre-installed cards, any 4 cost card, an Excavator, and any 1 other rezzed card is a kill.

If you have a pre-installed Bass, click Bass, then refuse to search with Ob. Play MAD, targeting a 4 cost card and any other rezzed card. After trashing the 4 cost card, use Ob to search the second Bass. Click Bass. We now have 2 clicks, so we Boom the Runner for the kill. Even if you only have one Bass in your deck, you can use a pre-installed Spin Doctor to shuffle it back for the MAD search, but this is a pretty niche case.

Ob murder decks can be shockingly fast. If you play against an Ob deck, you can expect to be dead by turn 8 if you don't have tech. The only faster decks would be Drago Azmari and Pravdivost, and that's only because Drago doesn't require any other rezzed cards to murder you as soon as turn 3.

There are some strong tech cards against MAD Ob. Pinhole Threading should be in your criminal decks so you can trash any pre-installed Bass or Excavators if need be. Stoneship Chart Room and 5 cards in grip means you can't die. Good ol' Citadel Sanctuary works wonders.

It's not clear how strong MAD will be in a solved meta. Although these tech cards are strong, Ob is fast enough that a Runner with a single tech card may still die. This is not to mention the fact that Ob decks can adapt to have more feasible scoring plans.