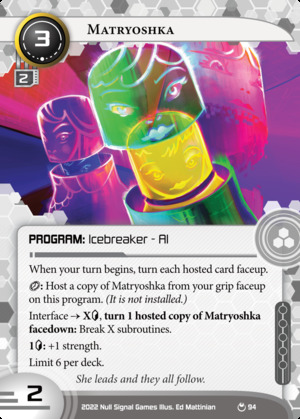 When your turn begins, turn each hosted card faceup.

click: Host a copy of Matryoshka from your grip faceup on this program. (It is not installed.)

{Card 6} Look at the little baby, even she helps!
{Card 5} Sheʼs little—but fierce.
{Card 4} Just as brave as his sisters.
{Card 3} Sheʼs a typical middle child, really.
{Card 2} Always there to back up her big sister.
{Card 1} She leads and they all follow.
Illustrated by Ed Mattinian
Decklists with this card

Somehow, this AI is both really good, and really clunky, at the same time! Which is a fantastic spot for an AI to be in. If they're too limited, they won't see play. But if they're too good, they run the risk of just replacing peoples' standard breaker suites entirely. (Remember Faust?)

So. Matryoshka. On the good side - its a reusable breaker with break costs that are identical to Corroder. That's pretty darn efficient - breaking any ice for the same cost as a one of the best breakers in a faction is impressive, and being able to target any ice type means that early game, it's hard for the corp to lock you out with gear checks.

On the clunky side though - the install costs. Not the 3 - that part is quite reasonable. No, I'm talking about the part where you have to draw and install (costing a ) the extra copies to make it function. In some ways, it's reminiscent of the old Crypsis, except that when you spend clicks to "wind it up" it stays wound. (At the cost of having to draw into more copies first.) And it doesn't even do anything until you've drawn at least two copies! But luckily, you can include 6 copies in a deck, so there's actually a decent chance to get it online early enough to provide some pressure.

One interesting thing about it is that it doesn't play nicely with very many card tutors. Self-modifying Code, Into the Depths, etc, all install a program after searching for it. But since you only install the first one, Matryoshka prefers cards that bring it to your hand. Mutual Favor is the obvious choice. But I'm not sure it's really necessary - with 6 copies in a 45 card deck, you have a ~40% chance to draw two of them in your first 10 cards. And that's not even taking into account if you mulligan for them. Also, extra shoutout to Ayla "Bios" Rahim, who's extra 6 cards at startup make it way easier to get something like this online.

Also, it's worth remembering that tutors can still help you with the initial install. If you have a Matryoshka and a Self-modifying Code in your hand, you can always use the SMC to install a Matryoshka out of your deck, and then just click to host the one you already had in your hand. This only works for the first one of course, but it can be a good way of getting the ball rolling.

Once you get it installed, the only real question then is "what else do you pair it with?" If you're spending 6 deck slots on Matryoshka copies, (and maybe 3 more on tutors), that's a lot of your deck already taken up. You probably don't want to include more than 1 copy of each breaker after that, if that. But you probably want at least some other way to get past ice, so that the corp doesn't just lock you out with big ice towers.

I've actually been having decent luck in Startup Format lately, paring it with everyone's favorite big dumb console, Endurance. They make a pretty good pair - Endurance deals with the big expensive stuff, and Matryoska helps save on power counters so Endurance doesn't have to waste time on the dinky ice. But Botulus is also pretty good partner, as well as standard criminal tricks like Inside Job. The thing is - it's not THAT common for corps to put more than 2-3 ice on a server. So while Matryoshka's limit is definitely something you have to keep in mind, it doesn't actually keep me out as often as I would have expected.

One other thing that probably bears mentioning is its apparent weakness to program destruction. In a set that has Nanisivik Grid and ZATO City Grid, (As well as lots of ways to land tags for Retribution) the corp can trash programs if they really want to. Losing a pumped up Matryoshka is very sad. But it's actually more resilient than it appears - the trick is that you don't really need very many copies for it to be a useful threat. 1-2 hosted copies, and you can still get through enough ice to keep Endurance fueled up, and even if it gets trashed, you still have a few more copies in your deck to fall back on.

So overall - a surprisingly good AI breaker. I find I am liking it a lot more than I thought I would, before trying to play it. The credit cost to install and break is actually really good for what it does. The extra card-draws and clicks required to get it rolling are a little taxing, but still probably fair for the value. It's not something you just drop into your deck as an occasional backup like Mayfly. It requires you to actually structure your deck around it a little. But if you do, it can provide a surprising amount of early game pressure and consistency!

A month ago, I fell victim to a cryptocurrency investment platform after investing a huge sum of money into it and they logged me out of my Bitcoin wallet with a balance of $73,800 in bitcoins and requested I pay 20% before I withdraw my funds. I had lost all hope to recover my money until I saw a testimony about Spyweb, the ultimate bitcoin recovery expert and hacker. I contacted them immediately and to my greatest surprise, I was able to gain access to my account in 24 hours. I’m truly grateful to Spyweb for their smooth recovery of my funds and I’m here to share this with everyone out there. You can contact them with the information below. spyweb@cyberdude.com Contact@spyweb.tech

This AI pairs well with Poison Vial to break more ices. Hence it goes well with criminals. Otherwise, it will be stopped if the corp has more than 2 ices protecting what you want to run.

I hope the mechanical concept of this card is used for other things, because I think it is a fun mechanic to explore.

Great ice, great quote, a pity there is no space for the rest of the quote (card 2 to card 6), but still great altogether. Fun, if niche, card.

I'm not sure how this interacts with Poison Vial in a favorable manner. You only flip one Matryoshka no matter how many subs you break, so Poison Vial doesn't add much. Moreover, you can host up to 5 on a single installed breaker, meaning to keep you out a Corp would need to stack 6 ICE on a server.